Ski blogger Sam Lozier is spending a chunk of this winter skiing in India.

The day after we got our bikes, we woke up to snow rapidly making its way down the valley. Within half an hour it was snowing hard in Vashisht and we were forced to endure a rest day as the slush piled up. The following morning (day two on the bikes), we woke up to sunny skies, and, after giving the road an hour to soften in the sun, we loaded up our ski bags, attached the skis to the bags and roared up through slushy mud puddles and slick roads to the Solang Valley, hoping to find sun and soft snow. En route, we discovered what might be the first rule of the tiny sport of motorcycle-accessed ski-touring: Your ski socks should not be your riding socks.

Solang is home to the only ski lift in the entire region (though the area does sport a heli-skiing operation), and as we approached, the road became clogged with taxis full of Indian snow tourists. Like Gulmarg, tourists come from all over to Solang to see and touch snow for the first time (and have vicious snowball fights). They are easy to spot in their snow-tourist uniforms: Rented knee-length fur coats and shin-height rubber mud boots.

After much frustration and honking, we finally managed to get through the traffic and up to the ski lift where the tourists had cleared from the road. Beyond the lift we rode up the somewhat plowed, not-yet-open road leading up to the army camp at Beas Kund, at the head of the . After getting the bikes several kilometers up the road, through several unplowed sections of deep, heavy snow, we pulled over at the point where we could no longer ride and got ready to ski.

Our tour was more about stretching our legs after a week of inactivity than it was about bagging a peak or notable line. Under an almost tropical sun, we began to break a skin track up a randomly chosen east-facing slope.  Guidebook-less, we were adrift and aimless in a valley so incomprehensibly large that it would have been almost pointless to have tried to guess well on our first day out.

The conditions we found were no surprise to us given our late start and randomly chosen tour. After climbing for two hours, we reached an impassible ridge, and, having been afforded stunning views of the lifetimes of potential skiing at our fingertips, began our descent of knee-deep, afternoon soup, glazed with thin and breakable sun crust.

We arrived back at the bikes by 4 p.m., tired enough to call the day a success. We rode back to Vashisht where a long soak in the of the Hindu temple, and a filling dinner at the guest house, thoroughly restored us.

Read and see more of Sam’s work at www.famousinternetskiers.com 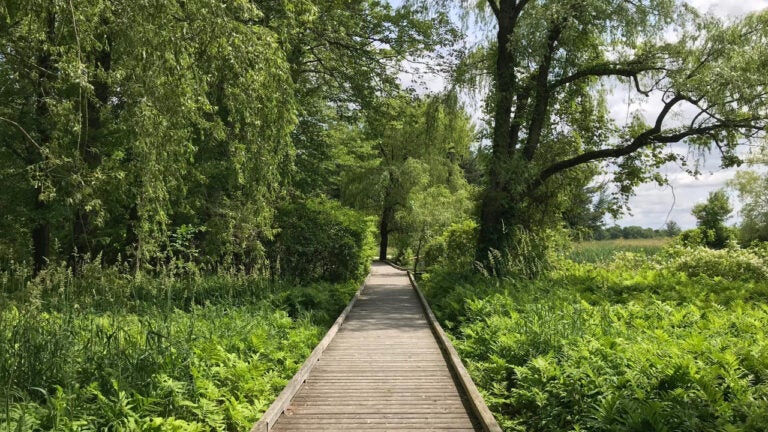 Where to find universally accessible hiking trails in Mass.