In restaurant Anfiteatro’s sleek waterfront lounge, skilled barmen muddle herb-infused cocktails as guests settle down at long dining tables set for a multicourse meal—wine pairings included. No, this is not New York or Paris. It’s Ponta Delgada, the largest city in the remote Portuguese archipelago of the Azores. At this teaching restaurant, part of the city’s hospitality school, you quickly learn a major lesson: Azorean food can be surprisingly modern.

Abundant in fertile farmland and surrounded by thriving ocean, the Atlantic island chain has been giving its rustic regional cuisine a contemporary boost for the last decade or so, largely due to the school’s annual food showcase 10 Fest, which hosts 10 gourmet dinners over 10 days in June. Here, in a place where chattering fishmongers and small-scale cheese makers are the norm, 10 well-regarded chefs from Portugal and guest nations elevate simple ingredients into gastronomic treasures, including squid terrine with passion fruit emulsion and artfully composed pineapple queijadas virtually floating on ethereal tea foam.

In creating their menus, the chefs draw from a bevy of local products caught from the sea and grown in rich volcanic soils. And, as a traveler, you can follow where they go, sampling island flavors along the way. So, in the spirit of a festival where good things come in tens, here are 10 food-filled reasons to visit the Azores. 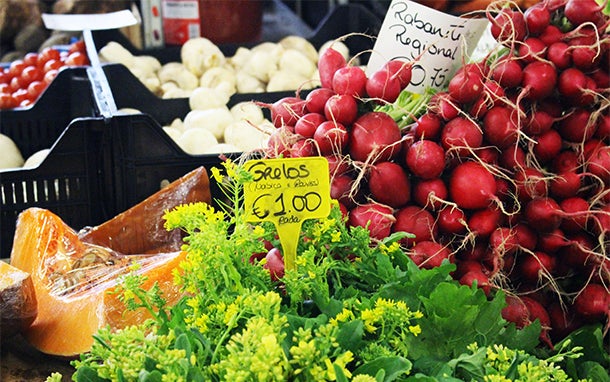 Where do 10 Fest chefs find inspiration? At Mercado da Graca, in the heart of Ponta Delgada on Sao Miguel Island, morning rays offer a clue by shining a soft spotlight on locally grown fruits and vegetables. Among the colorful stalls in the semi-covered market, exotic fruits like guavas and perfumey passion fruits recline on angled slats, while juicy pineapples sway on hooks or sit customer-ready inside cardboard carrying boxes. Piled in baskets, turnip greens and radishes hold the floor, and cabbages and red peppers beckon to be made into soups or mashed into a spicy paste to accompany fresh cheese. An unusual lemon called the galego awaits its calling as a seasoning for fish, one of the islands’ most prized commodities.

In the liveliest part of the market, fishmongers put on a show hawking their scaly wares, playfully competing for the attention of anticipating buyers. Right before your eyes, they clean luminous just-from-the-boat swordfish, mackerel, and eel, and then lay them out to chill on beds of ice. Their fish are fresh and they will tell you so, loudly.

[fragment number=1]But these wool-capped sellers have plenty to boast about. Some of the world’s best seafood is drawn out of the Azores’ clear blue waters, and the resulting cuisine is deeply embedded in the local heritage. On menus, find popular dishes such as sustainably caught tuna sliced into steaks, traditional stewed octopus, or grilled limpets smothered in a garlic-butter sauce and served tableside on steaming iron skillets. And that’s just the beginning.

With cows dotting nearly every hillside, it’s no surprise that the islands are as big on dairy as they are on seafood. Milk, yogurt, and even ice cream will satisfy your lactose cravings; however, it’s the cheeses—soft, firm, or spreadable—that are truly memorable. Each island produces its own distinct varieties, but queijo de Sao Jorge (Sao Jorge island cheese), which has been granted Protected Designation of Origin status, gets the title of most famous. Pale yellow in color, the enormous semi-hard wheels made from raw cows’ milk are aged for several months before their tangy curds ripen just so. If you’re touring Sao Miguel, you can see the rounds stacked high on shelves at O Rei Dos Queijos (The King of Cheeses) attached to the mercado or sample some (along with other local favorites) with bread at island restaurants. 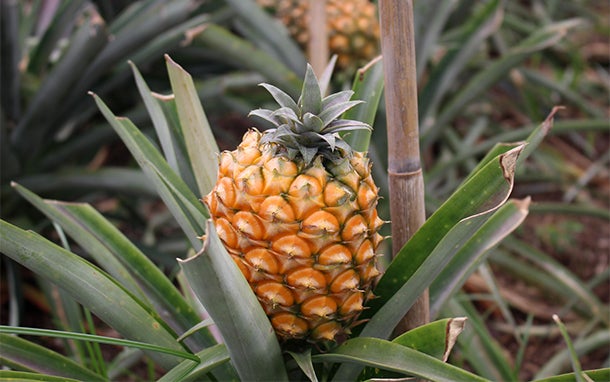 Pint-sized but packed with flavor, Azorean pineapples are special. Since the sub-tropical islands don’t benefit from hot equatorial sun, the small-crowned fruits are grown in greenhouses, which are intentionally filled with smoke to help catalyze simultaneous flowering. You can peek inside the whitewashed A-framed structures—with pineapples blossoming in various stages—at A. Arruda Pineapple Plantation, just outside of Ponta Delgada. Each pineapple takes two years to mature, but thankfully you won’t have to wait that long to taste one. Sweeter and more succulent than their larger, tropically grown siblings, they are readily available in liquor or jam form and are often incorporated into desserts. But if you’re a purist, order a fresh slice and savor it just like candy. 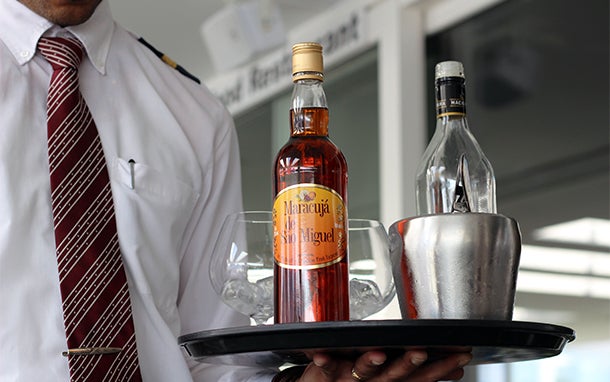 Pineapples might have a starring role on Sao Miguel, but when it comes to liquors, they are not the sole players in the islands’ cast of luscious fruits. A Mulher de Capote distills liquors and brandies with maracuja (passion fruit), blackberry, lemon, and tangerine—in addition to pineapple—and offers tasting tours at its factory in Ribeira Grande. However, after long days of touring, you’ll find few things more refreshing than sipping some of the sweet liquid poured on the rocks at an outdoor waterside cafe.

As with many cuisines around the world, Azorean food pairs perfectly with wines crafted from the local terroir. However, in this basaltic island terrain, grapes are grown in a rather unconventional manner—in currais (stone walls) that protect the vines from the tempestuous sea. On Pico, the main wine-producing island, this unique vineyard landscape has been designated a World Heritage site by UNESCO. Red, white, or fortified, the resulting wines carry notes of volcanic earth and were so well regarded that they were once favored by Russian czars. You can learn all about the Azorean viticulture technique at the museums in Lajido (on Pico) and Biscoitos (on Terceira), and you can taste the finished product at Pico’s cooperative or at just about any restaurant on the islands. 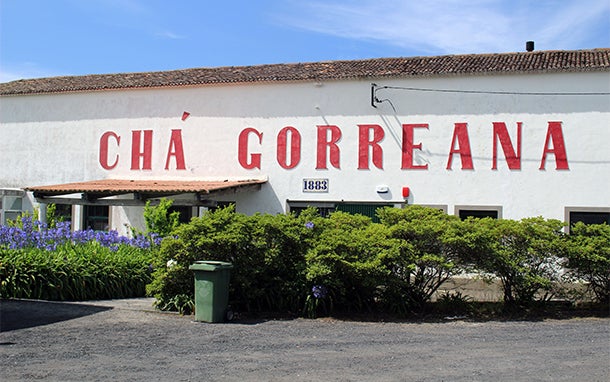 Not all Azorean drinks are extracted from fruit. The Gorreana Tea Estate near Ribeira Grande has been producing organic green, black, and orange pekoe teas since 1883, and it’s the only commercial tea company of its kind in Europe. Once wild, camellia sinensis plants are now cultivated in perfectly manicured rows that lead out to the sea. You can view them firsthand at the plantation or venture on a pleasantly tannic journey through the tea-making process (with tastings) inside the factory and museum. The mild, delicate brews also make an appearance in Azorean desserts such as pudim de cha verde (green tea pudding). 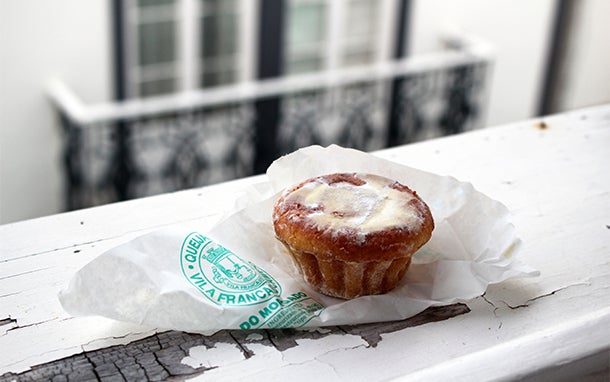 Milk, eggs, butter, flour, and a bit of sweetness are all you need for an Azorean baked treat. Crusted with powdered sugar and wrapped in crisp white paper, regional specialties like queijadas de Vila Franca do Campo (from Sao Miguel) delight in their simplicity. Originating in convents, these yolky custards were created by nuns who used the white part of the egg to starch clothing and didn’t want to waste the rest. Traditional sweets from other islands include star-shaped queijadas da Graciosa (from Graciosa), cream-stuffed fofas (from Faial), and a type of honey cupcake called donas amelias (from Terceira). Even simpler are the islands’ breads, such as massa sovada, which is sweet and yeast-risen, and bolo de serta, made with corn flour.

When it comes to Azorean food, whether sweet or savory, there is one item that commands an audience above all others. By the banks of Furnas Lake on Sao Miguel, a stew is more than just a stew. It’s cozido, a complete meal cooked geothermally by volcanic steam. While the concept is otherworldly, the preparation is quite basic: In a large pot, layer pork, beef, vegetables, chicken, and sausage; season with salt; and then place in the ground to cook, very slowly. After about six hours, you can watch the pots being hauled up and sent off to nearby dining rooms for lunch. While it’s possible to make a good cozido at home on the stove, why miss the fascinating show? 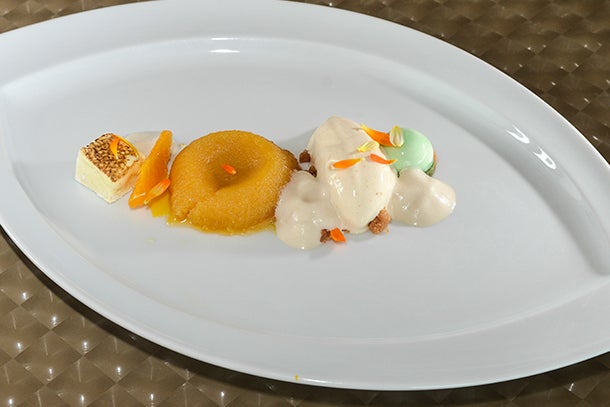 When exploring Azorean food, the 10th reason is, of course, 10 Fest. Started in 2012 to commemorate the 10th anniversary of Escola de Formacao Turistica e Hoteleira, the event, led by executive director Filipe Rocha, will soon see its third edition from June 19 through 28 of this year. While filled with Portuguese pride, the hospitality school—which has an ongoing partnership with Johnson & Wales University in Providence, Rhode Island—believes that the inclusion of non-Azorean chefs adds a unique perspective to the festival. And this year’s lineup includes chefs, bartenders, and sommeliers from Spain, Canada, France, the U.K., Denmark, the U.S., and, of course, Portugal.

As in previous years, each six-course dinner (held at restaurant Anfiteatro) will highlight new twists on regional flavors and will serve about 70 people—mainly locals, though the number of tourists is expected to increase in 2014. (To book, email the school and restaurant.) With its energetic approach and inspired dishes, the festival offers travelers a delicious window into an emerging culinary destination with strong ties to its roots. Not only will a trip to the Azores surprise you, but it will also take you on a flavorful journey of old and new. Best of all, the islands are easier to reach than you might think. SATA offers nonstop service to Sao Miguel (about a four-hour flight from Boston) and connecting service to other islands.