Myles Chung and Dan Emery have been on the road for over 100 days. They’ve traveled nearly 4,000 miles and have visited 18 states. But this isn’t your typical road trip. The Augusta, Maine residents are trekking across the 48 lower US states in 48 weeks to raise funds and awareness for charity.

The two friends created the American Community Project, founded to investigate hunger throughout the United States. What was originally Emery’s brainchild is now a nationwide project, raising awareness and funds in each state they visit.

During their trip, Chung, 21, and Emery, 30, will stop by places like community gardens, food banks, soup kitchens, and homeless shelters to educate themselves and their followers on issues and potential agriculture-focused hunger solutions. The two men keep a regularly updated blog, American Community Project, and website where visitors can read about their journey and donate to the cause.

They have private donors and local sponsors donating to their project, according to Chung. At the end of the journey, he says, they’ll split the money raised 48 ways, and donate to one organization in each state that focuses on agriculture-based hunger solutions, such as greenhouse projects and education programs.

“We try to meet people and have them donate to help us get to our goal and support local organizations,’’ said Chung. 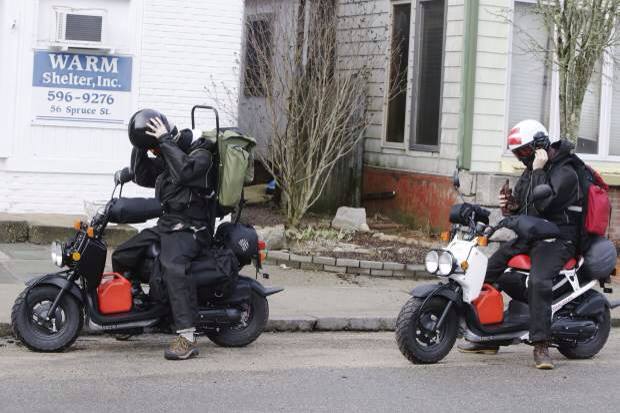 Emery and Chung on their Honda Ruckus scooters.

Just four months ago, on January 8, Chung and Emery took off from Wakefield, Mass. on their 40-mile-per-hour Honda Ruckus motor scooters, with just a couple bags each in tow. Traveling 100 to 150 miles per day, they’ve survived below-freezing temperatures, interacted with locals, taken homeless men to lunch, and were named official Dukes of Hazard by Mayor Nan Gorman from Hazard, Ky.

“I’ve thoroughly been moved by the overwhelming generosity of the people we’ve come across in the communities,’’ said Chung. “They’re so willing to help us and teach us.’’

The trip, at times, has been anything but glamorous. According to Chung, they rarely know ahead of time where they are going to sleep, depending on family and friends, residents’ advice, pinching pennies for rooms (though Chung says they’re avoiding hotels), tent camping, and even lodging in homeless shelters. At a stop in Georgia, Chung said they were referred to a riverbank crawling with alligators where they ended up camping.

“It provides a unique perspective,’’ said Chung. “It’s a little unsettling but, for the most part it has given us a good taste of the comraderie of strangers and it’s eye-opening at the same time.’’

Riding on motor scooters has also posed a few challenges. The duo is not allowed on highways, so they must rely on back roads to get from place to place. During the colder months, this meant frequent stops to warm up, doing jumping jacks on the side of the road or going in to gas stations.

But Chung says the bikes allow them to experience the communities more intimately, add to the marketing aspect, and—most importantly—are cheap to maintain. So far, they’ve spent around $300 total on gas for both scooters—which get up to 100 miles per gallon—and have had no accidents or mechanical issues.

“We have a tight budget,’’ said Chung. “We’re trying to raise awareness for this cause and get to know the communities and their food situation, not spend money.’’

Chung said hunger has been an issue at every stop so far. The challenges have ranged from poor farming conditions to the fast food epidemic to lack of agriculture education. 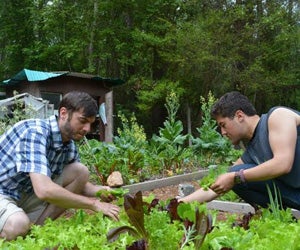 During a stop, Chung and Emery visit a community garden.

“One thing I know [Emery] is very passionate about is educating people on where their food comes from,’’ said Chung. “I know that’s something we’ll try to push for in other communities.’’

While in Hazard, Ky., Chung and Emery came across a farm-to-school program, where students are taught how to grow their own food. Another successful solution they’ve observed, said Chung, was public gardens that provide food to locals as well as homeless shelters and food pantries.

For Chung, the trip has also been a personal journey. While in high school, Chung said he struggled with his weight. A few years ago, he decided to take control of his health and learn about local, healthy eating. He said this sparked his interest in promoting agriculture-based solutions for ending hunger.

“From what I’ve seen, just giving people food is more of a Band-Aid,’’ said Chung. “If a community can learn about these options, we can eradicate hunger and we can also promote overall health.’’

Chung and Emery are currently in Little Rock, Arkansas. Now that the weather has warmed up, they plan to focus on raising funds, reaching out to the media, and visiting more organizations. They’ll end their trip at home in Augusta, Maine on December 9—they still have seven months, 30 states, and thousands of miles to go.