SOUTH HERO, Vt. (AP) — Abandoned rail lines have been converted into recreation paths all over the United States. But the Island Line Trail in Vermont is unusual: It includes a causeway that runs across the open waters of Lake Champlain, from the Vermont mainland to the island community of South Hero. And that causeway includes a gap to allow boats through.

So how do bikers and others get across the 200-foot gap, known as the cut? An in-season ferry takes them from one side to the other.

It’s been more than a half-century since trains used the narrow causeway built on marble and granite blocks around the turn of the 20th century. A rotating bridge once connected the causeway’s two sections, with the bridge opening up for the boats that now sail through the gap, but the bridge is long gone. The trip by ferry takes just a few minutes.

The unique trail across the lake is open for walking, running and fishing, but it’s mostly used by bicyclists, giving them a chance to practically pedal across the water amid the sailboats and motorboats. From one side of the cut, it’s more than 3 miles south to the mainland town of Colchester. From the other side it’s just a few hundred yards to South Hero. 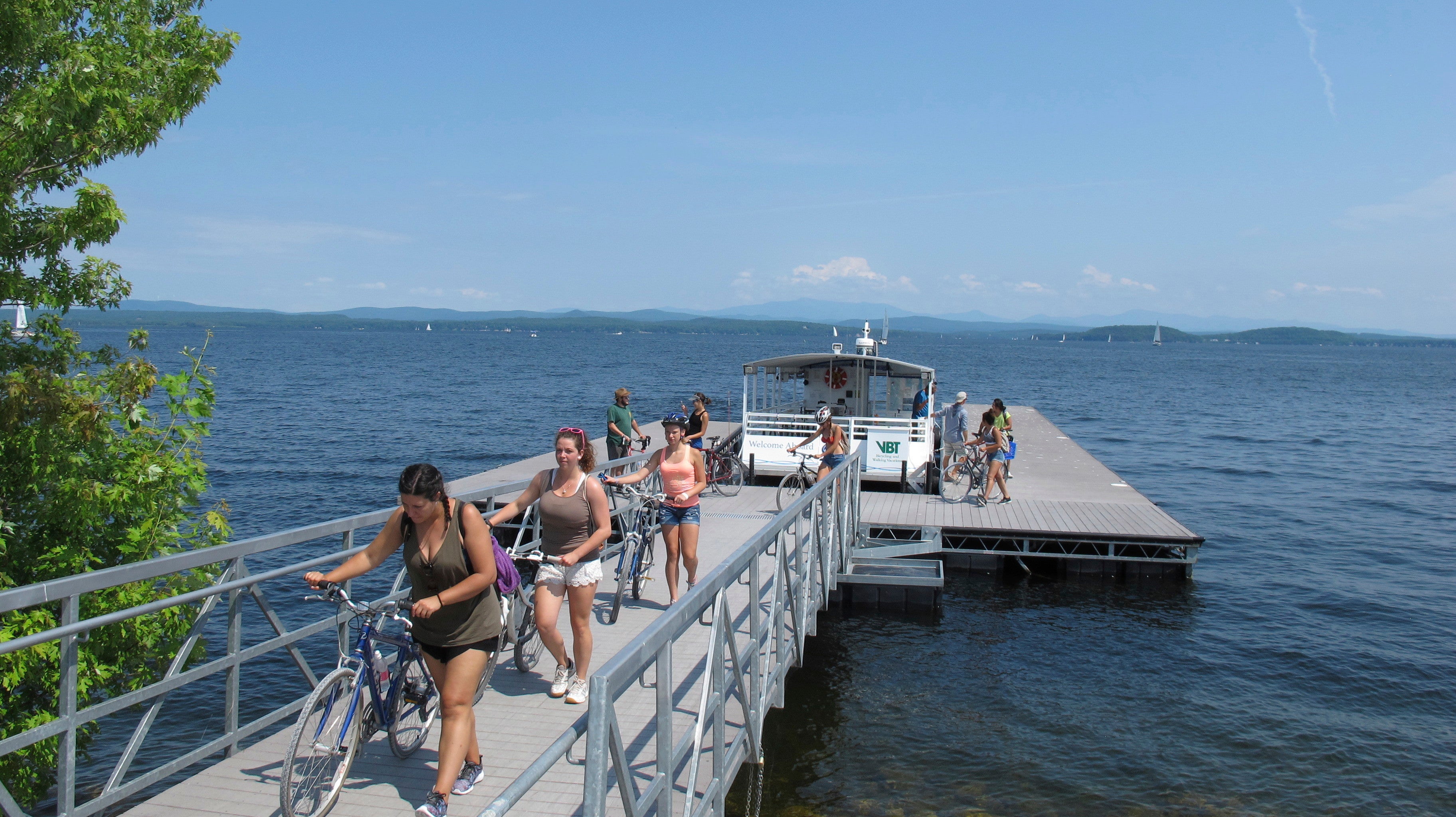 Bicyclists walk their bikes after getting off a special ferry across a cut in an abandoned railroad causeway from the Vermont mainland to the Lake Champlain islands.

New York’s Adirondack Mountains are to the west while Vermont’s Green Mountains stand to the east. On sunny summer days pleasure boats will dot the water on both sides of the causeway.

‘‘It’s absolutely gorgeous,’’ said Julie Lussier, who rode the causeway while visiting the Burlington area for a recent weekend getaway from Montreal. ‘‘It’s bucolic and I think that the landscape is absolutely amazing. I will recommend the trail, for sure, to my colleagues here and in Montreal.’’

The only downside to their afternoon on the trail was their choice of bikes. Lussier and Eric Gauthier were riding road bikes with narrow tires meant for pavement while off-road bikes would have been better for the gravel path, they said.

Despite their choice of bikes, the trail made for part of a wonderful weekend of riding and sampling beer from some of Vermont’s many microbreweries. ‘‘We love the microbreweries,’’ Gauthier said.

The trail can be narrow in places and the sides steep down to the water, requiring passing bicyclists to show courtesy to one another. Anglers carry their tackle onto the rocks to cast their lines into what would otherwise be the middle of the lake.

The causeway is part of the almost-14-mile Island Line Trail, which starts at Burlington’s Oak Ledge Park and runs north along the Lake Champlain waterfront at the edge of Burlington’s vibrant downtown. A portion of the bike path in Burlington is under renovation this summer, detouring riders onto the city’s North Avenue for about 2 miles. 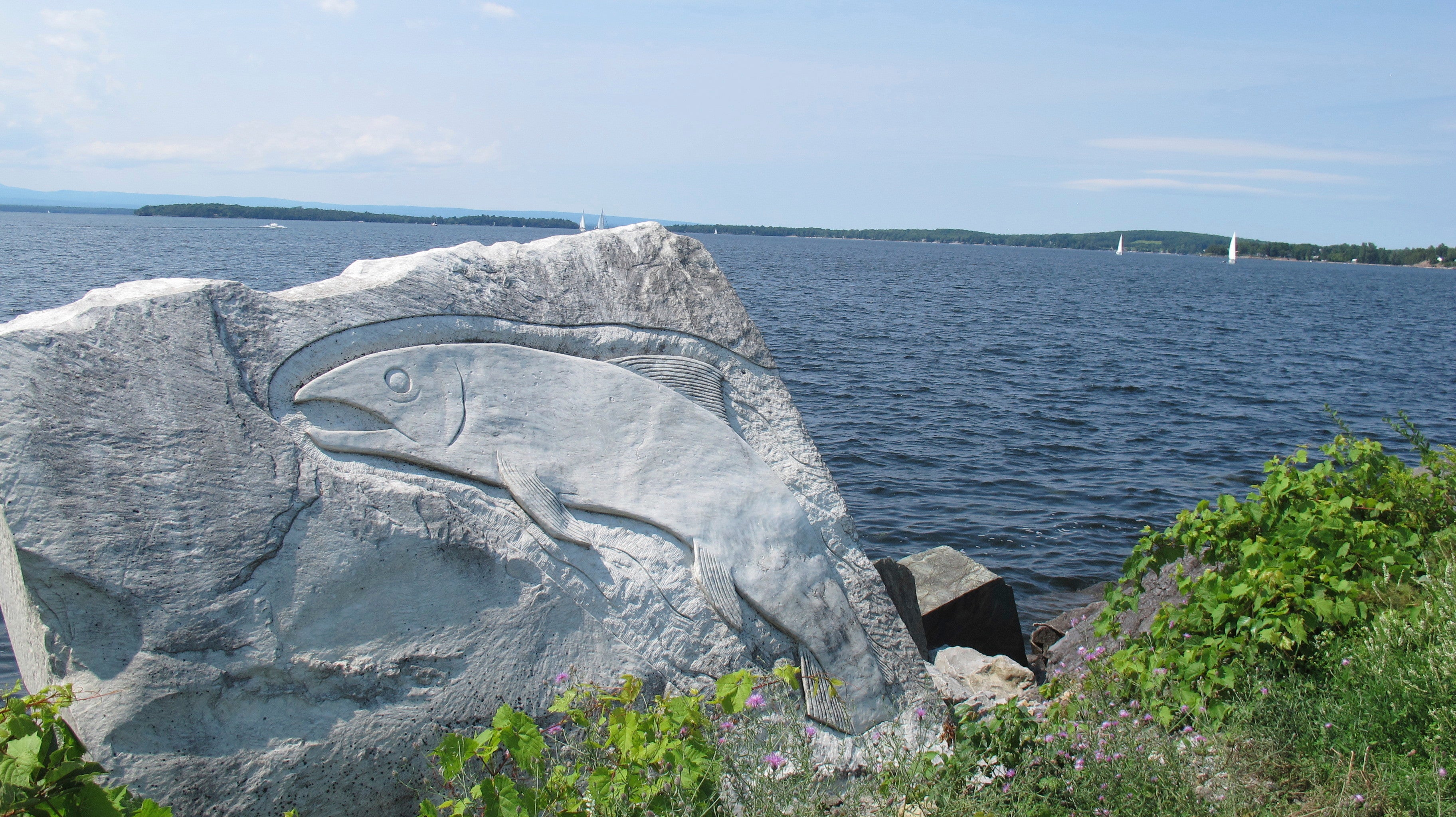 An image of a fish is carved into a piece of marble used to make a now-abandoned railroad causeway between the Vermont mainland and the Lake Champlain islands.

The entire trail is owned by the city of Burlington, the town of Colchester and, north of the cut, the Vermont Department of Fish and Wildlife. The non-profit group Local Motion manages the trail and owns and manages the bike ferry, coordinating to make sure people who use the trail ‘‘don’t even notice it has three different ownerships,’’ said Local Motion interim executive director Jason Van Driest. ‘‘If you’re out there riding you just want a nice experience.’’

Riders don’t have to begin their journey in downtown Burlington. There are lots of places to park and begin a ride, on both sides of the causeway.

For those headed north, from South Hero and Grand Isle, or farther on to North Hero, there are lots of quiet country roads that offer peaceful riding that can be part of a loop back to the ferry.

For the ambitious cyclist, the Island Line Trail map suggests what it calls a ‘‘triple ferry loop’’ that includes the causeway ferry. Northbound riders could then continue north to where the vehicle-carrying Lake Champlain Transportation Inc. ferry crosses Lake Champlain between Grand Isle and Cumberland Head, New York.

From there, cyclists head south along U.S. Route 9 to Port Kent, New York, where they can catch another ferry back the Burlington waterfront. The total trip is about 40 miles (64 km) with spectacular views of the lake from both sides. 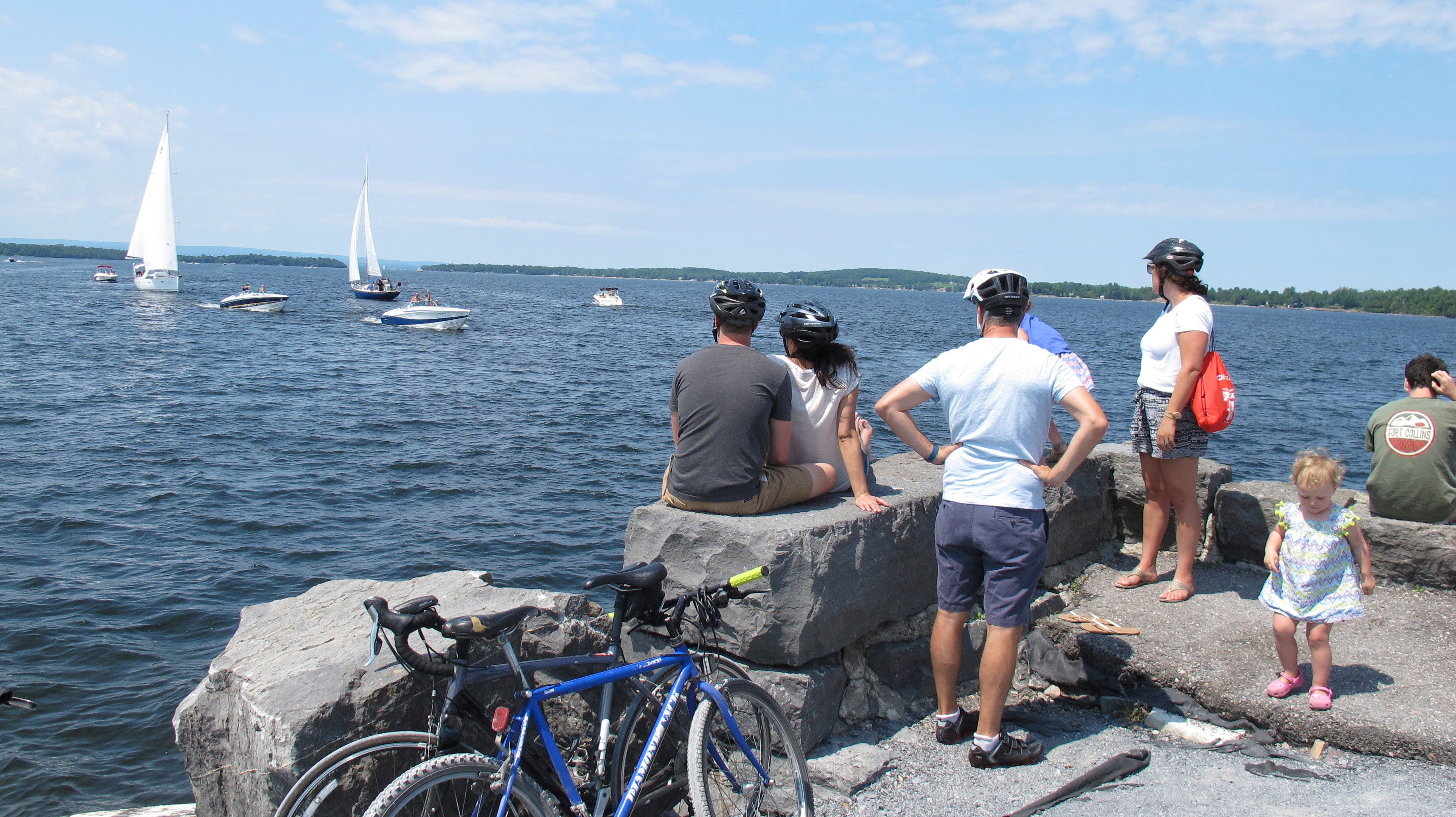 Bicyclists watch as boats prepare to pass through a cut in an abandoned railroad causeway from the Vermont mainland to the Lake Champlain islands.

Tips: There are numerous places to park on both sides of the causeway. Local Motion rents bikes in downtown Burlington and free maps are readily available along the trail. For riders interested in the ‘‘triple ferry loop,’’ two of the ferry legs are on the separate Lake Champlain Ferries, which carry vehicles and passengers, http://ferries.com/ .