Aqua waters, swaying palms, powder-soft sand, and rum punch — ooh baby. If you’re considering a cruise vacation, it’s hard to resist the allure of the Caribbean. No wonder the islands often rank first among most popular cruise regions, based on quote requests at CruiseCompete.com, a cruise booking website. But beyond the usual Eastern and Western Caribbean routes lies a world of cruise ports that are way off the beaten path. (Jeju Island, South Korea, anyone? Or maybe a nice vacay voyage to Siberia? Check and check.)

The industry continues to grow — by 20.5 percent for the five years from 2011 to 2016, according to Cruise Lines International Association — with 27.2 million passengers expected to set sail in 2018. To keep things exciting, cruise companies are expanding their itineraries to include exotic ports of call. “One constant within the cruise industry is that the lines are always looking to create intriguing, ground-breaking experiences,’’ says Heidi Allison of CruiseCompete.com and AllThingsCruise.com. The CruiseCompete booking site has a search tool where travelers can plug in a desired destination and length of trip and find out which ships go there. Once you start scrolling, you’ll likely be astonished at how many cool ports — and how many countries — you can visit on a cruise ship, and how easy it is to country-hop when somebody else is doing the driving.

If you’ve cruised in the past, think about places you’ve enjoyed and then go a step beyond. Already done Turkey? Consider Albania. If you’ve traveled to St. Martin and Antigua, how about exploring the Pompeii-like ruins on Montserrat? The lesser-known islands (among its 13,000) in the republic of Indonesia are beginning to attract small ships, as is the northeastern side of Iceland, far from the throngs at Reykjavik. Many of the more far-flung ports are included on repositioning cruises, one-way routes with different embarkation and debarkation ports, when the ship moves from one region to another.

According to Allison, a few regions are emerging as “the latest favorites’’ for cruise travelers in 2018. On the hot list: French Polynesia, the Canary Islands, and sites in Cuba beyond Havana. “New [Cuba] itineraries visit Cienfuegos, a UNESCO World Heritage Site, and Santiago de Cuba, a mecca for salsa music,’’ Allison says. Belize and Honduras are coming on strong, she says, as Central and South America are becoming more popular with Americans. In Asia, “more obscure groups like the Maldives are being added to itineraries as interest increases,’’ she notes, and East Asia will likely see an influx of visitors who will use Seoul as a launch pad to visit the region. Interest in South Korea is rising due to the 2018 Winter Olympic Games in PyeongChang. Another soon-to-be-Olympic Games site, Japan (host of the 2020 Summer Olympic Games) is emerging as a nontraditional multigenerational family cruise destination, Allison says.

We did some digging of our own to sleuth out cruise ports that made us say, “Wow. Who knew you could cruise there?’’ Here are a few of our favorite finds, and a sampling (although not a complete list) of cruise lines that visit these unique ports.

ALBANIA
Located on southeastern Europe’s Balkan Peninsula, along the Adriatic Sea, tiny, mountainous Albania was described as “the sleeper hit of the Balkans’’ by Lonely Planet. Once behind the Iron Curtain, Albania is rich with ruins, castles, and UNESCO sites, with a backdrop of snow-capped mountains.

CANARY ISLANDS
With a perfect year-round climate and stunning black sand beaches, this archipelago in the Atlantic is gaining in popularity among cruisers. Situated off the northwestern coast of Africa (Morocco is 62 miles away), the seven Canary Islands are an autonomous region of Spain. Things to see include Mt. Teide National Park (on Tenerife), plus lava fields, dunes, and prehistoric sites. Surfing, kite surfing, and wreck diving are adventure-y options.

JEJU ISLAND
Explore an otherworldly landscape of caves, lava tubes, and crater lakes on this island located off coast of South Korea in the Korea Strait. Jeju Island is home to Hallasan Mountain, South Korea’s tallest peak, a long-dormant volcano, plus beautiful beaches.

KAMCHATKA PENINSULA
Set on Russia’s far eastern shore, Kamchatka is part of Siberia, located between the Bering Sea and the Sea of Okhotsk. It’s a good bet that even your well-traveled friends haven’t been here. Starkly beautiful and remote, it’s a landscape of mountains and volcanoes, dotted with brown bears. Reachable via Nome, Alaska to the east (or Japan to the south), its port is called Petropavlovsk.

Who goes there: Silversea, on its “Russia Far Eastern’’ route, and in 2019 on a Tokyo-to-San Francisco voyage with Crystal Cruise Lines.

KIMBERLEY, AUSTRALIA
Natural beauty makes this a destination worth seeking out: think gorges, sandstone cliffs, and several national parks and marine reserves. Kimberley is located in Western Australia, bordered by the Indian Ocean and the Timor Sea.

PAPUA, NEW GUINEA
Located in the South Pacific, north of Australia and east of Indonesia, Papua comprises the eastern half of New Guinea and its offshore islands. (Fun fact: Fully independent from Australia since 1975, New Guinea is the most linguistically diverse country in the world, with more than 700 native languages.) Most residents live in tribal villages set within rainforests. Cruise excursions focus on local culture, hiking, beaches, and watersports.

SEYCHELLES
A sovereign African nation, the Republic of Seychelles is made up of 115 islands, set 932 miles east of mainland East Africa in the Indian Ocean. The islands are known for sublime beaches, coral reefs and nature reserves, rainforests, and rare animals like the Aldabra giant tortoise. Most cruises stop at Mahe’, home to the capital, Victoria.

SIR BANI YAS ISLAND
Set in the Arabian Gulf between Dubai and Bahrain, in the Al Gharbia region of the United Arab Emirates, Sir Bani Yas is a nature reserve teeming with wildlife. Cheetahs, hyenas, and giraffes roam free here, and the desert-y island is home to one of the largest herds of the endangered Arabian Oryx in the world. Kayaking in mangrove-shrouded lagoons and horseback riding are among the activity options.

Nice as it is to get lots of “likes’’ for those pictures of rum punch you posted on social media, there’s something to be said for communing with an oryx. 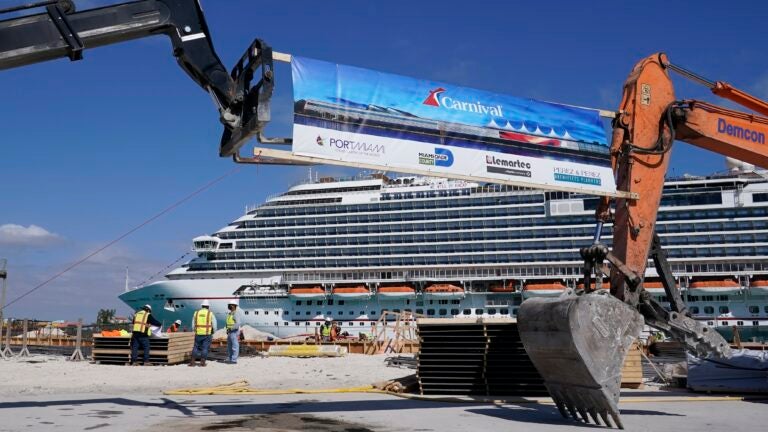