Even if your idea of fun on the water is a floatie with a drink holder, there’s no denying that Newport Harbor is a knockout. Like a parking lot full of Bentleys and Rollses, it holds an eye-popping array of classic yachts, famous 12-meter race boats, and every type of sail-, power-, and mega-yacht imaginable. Even the famous former residents of Newport’s glittery mansions — we’re looking at you, Doris Duke — would surely be impressed. There’s no denying that this Rhode Island outpost is one of the most sail-centric of US cities, especially when the Volvo Ocean Race comes to town. Newport is the only North American stopover on this event, considered to be the world’s most grueling ocean race. Sailors circumnavigate the planet, covering more than 45,000 nautical miles.

The 11-leg race is sailed day and night, in seven one-design, high-performing race boats equipped with the latest technology. The teams left Alicante, Spain, in October and are expected to arrive at Newport’s Fort Adams State Park by May 10 or so. For 13 days, from May 8 through the 20, the park will be transformed into a Race Village featuring live music, food, entertainment, plus sailing lessons and lots of sailing-themed activity.

Want to soak up the salty action — or simply have a chance to say, “I like the cut of your jib’’ to someone who actually knows what a jib is? Here’s a look at what’s happening, where to go, and how to get there, plus a few other worthwhile pursuits if all that chat about sail trim and port tacking gets tiresome.

Best vantage point
Fort Adams State Park will be Racing Central during the May 8-20 timeframe. A large outdoor screen will broadcast the race — happening just a few yards off the shoreline — with live narration. A globe-shaped theater will offer an immersive experience, capturing what it’s like to be onboard one of the sleek racing boats in the middle of all the action. At the One Ocean Exploration Zone, interactive exhibits will highlight ocean sustainability and marine science. Beyond the race village, racing will be visible from the western coast of the state park, as well as the shore side of Jamestown island south of the Newport Pell Bridge. There will also be a race mark set off Gurney’s Newport Resort on Goat Island, with public areas where viewers can see sailboats round their marks.

Getting around
Sailing in Newport is fun. Driving? Not so much. Consider parking at the Newport Gateway Center Lot and then hopping on the intra-harbor water taxi (Newport Harbor Shuttle) to Fort Adams State Park. The water taxi is available from several points in downtown and on Jamestown, with extra service provided during this event. There will also be ferry service from Providence and Jamestown. Go to www.volvooceanracenewport.com/ferry-information for details. The website also offers options for getting out onto the water in a spectator boat (available May 17-20), if you really want to be in the thick of it.

If you really can’t get enough of this sport . . .
Captivated by all things sailing? Add on a stop to the Herreshoff Marine Museum & America’s Cup Hall of Fame in Bristol (www.herreshoff.org). Exhibits display more than 60 significant boats, from an 8½-foot dinghy to the 75-foot Defiant, the successful defender of the America’s Cup in 1992. Don’t miss Sprite, a catboat built in 1859 that’s thought to be the oldest existing private yacht in the United States.

A visit to Newport without visiting one of the Gilded Age cottages on Bellevue Avenue? As if! You probably know that Rhode Island native-slash-Alex and Ani jewelry billionaire Carolyn Rafaelian bought Belcourt mansion for $3.6 million in 2012; she has since been restoring the Richard Morris Hunt-designed Beaux Arts beauty to its former glory. Guided tours of the restoration — still ongoing — are now available by reservation on Mondays, Wednesdays, and Fridays at 10 a.m. (www.belcourt.com). And you may have seen The Breakers, the former summer cottage of the Vanderbilt family, but you haven’t seen it like this: a new tour goes “Beneath the Breakers’’ into the underground tunnel, basement, and boiler room of this famed mansion, revealing how technology and modern plumbing transformed daily life (www.newportmansions.org).

There are also new exhibits on display at a couple of mansions. At glorious Rosecliff, a show called “Bohemian Beauty: The Aesthetic Movement and Oscar Wilde’s Newport’’ celebrates the ideal of pure beauty and “art for art’s sake’’ championed by the movement (1870-1890). Open through Nov. 4, the exhibit features 80-plus objects (www.newportmansions.org). Finally, there’s a new show at Doris Duke’s Rough Point: “Designing for Doris: David Webb Jewelry and Newport’s Architectural Gems,’’ drawing parallels between hand-drawn architectural plans and sketches of bespoke jewelry (www.newportrestoration.org).

Where to eat and drink
One of the major joys of visiting Newport is strolling along the wharves, deciding where to eat. If you want to rub elbows with sailors as you nosh, the Clarke Cooke House restaurant and bar (www.clarkecooke.com) on Bannister’s Wharf is a reliable choice. Many an America’s Cup victory has been celebrated here over the years, amid regatta memorabilia. A tiny spot on Thames Street called Zelda’s (www.zeldasnewport.com) also draws the sailing crowd, mainly to drink. All of the waterfront restaurants should be up and running, but if you want to try someplace new — or new-ish — consider Scarpetta, a neo-Italian restaurant at Gurney’s Newport Resort on Goat Island (reachable via causeway). Opened last summer, it’s winning fans (that spaghetti!); plus, you can pop outdoors and look for the resort’s resident goat after dinner (www.scarpettarestaurants.com/newport). Then there’s Surf Club, located inside the Newport Bay Club on Thames Street. If it’s been a chilly day out watching the racing, you’ll be happy for the brick oven warmth of this place, and its hearty menu of pizza, burgers, mac and cheese, and other comfort food (www.surfclubnewportri.com).

Where to stay
Lodgings options are numerous, and many are downright alluring, including Gurney’s Newport Resort and the stately Grace Vanderbilt, plus several atmospheric inns and B&Bs. However, you might be out of luck at this point — some places we checked are already sold out. The official Newport website (www.DiscoverNewport.org) has scads of listings, and Airbnb (www.airbnb.com) lists more than 100 local rentals. Given that the city is a mere 70 miles from Boston, it’s also doable as a day trip, provided you resist those Dark ’n’ Stormies! 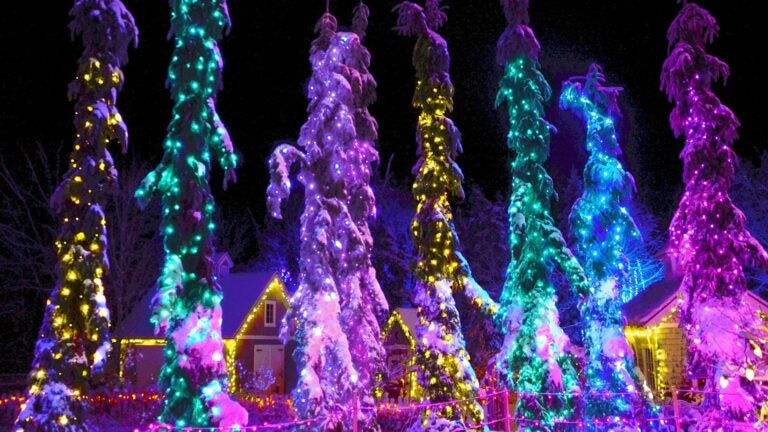 These are the best Christmas light displays in New England, according to Travel + Leisure