OLD LYME, Conn. — Little feet race across a green lawn that slopes gradually down to a meandering river. Little faces press close to a fantastical assortment of miniature buildings scattered across the lush landscape. Little eyes open wide to peer into the depths of tiny lodgings, searching for signs of fairy life.

It’s Wee Faerie Village at the Florence Griswold Museum. This year’s village, Lettersburg Junction, marks the 10th anniversary of a show that began as a response to the economic downturn of 2008 and now draws fairyland devotees from across the country. In Lettersburg Junction, which runs from Sept. 29 through Oct. 28, fairies live in houses resembling letters of the alphabet (or punctuation symbols or an occasional number) spread across the museum’s 13-acre campus. Using their “directionary,’’ visitors can stop by the quaint hamlet of Numbertown, check out Punctuation Stations where the homes can be questionable (?) or trendy (#), and create their very own fairy houses based on their initials in Letter Land.

The economic meltdown in 2008 hit museums especially hard, says David Rau, the museum’s director of education and outreach and the creative mastermind behind Wee Faerie Village. “A lot of museums hunkered down and canceled programs. Our programs director asked me to think about something we could do that would be inexpensive and use local resources.’’

Having seen a fairy garden event in Portsmouth, N.H., a few years earlier, Rau decided to give the idea a go. The first Wee Faerie Village ran for three weeks in the fall of 2009 and drew 10,000 visitors. It has taken off from there. In 2013 over 17,000 people visited to see a fairy village based on “The Wizard of Oz.’’

Local artists and craftspeople work all year on the whimsical creations that make up each year’s village. Christopher Steiner, who teaches art history and runs the museum-studies program at Connecticut College, has created fairy houses for all 10 Wee Faerie Villages, with help from his son, Everett. His pieces often include an element of humor, such as his 2011 birdhouse based on “The Emperor’s New Clothes,’’ which displayed nothing but an audio track of people admiring the beauty of a birdhouse that wasn’t there. “I tend to break the rules,’’ he says, “but apparently they’re OK with it — they keep asking me back.’’

His installation this year has a bit of social commentary. He’s using the letter Q to introduce “Qmunity,’’ a celebration of difference and diversity in a fairy house awash in rainbow colors and multicolored lights. Steiner estimates that he and Everett put in about 50 hours creating a fairy house for Wee Faerie Village.

Fairy mania shows no signs of waning, says Rau. Escapism is part of the draw, along with a fascination for things in miniature. “People really revel in how the miniature artists’ minds work and also the level of labor they’re willing to put into each house, such as shingling an entire barn with pine cone pieces.’’

Wee Faerie Village has also been a great way to bring new visitors to the museum, which celebrates American art, particularly the American Impressionists of the Lyme Art Colony. As Rau puts it: “The fairies made the families try us.’’ 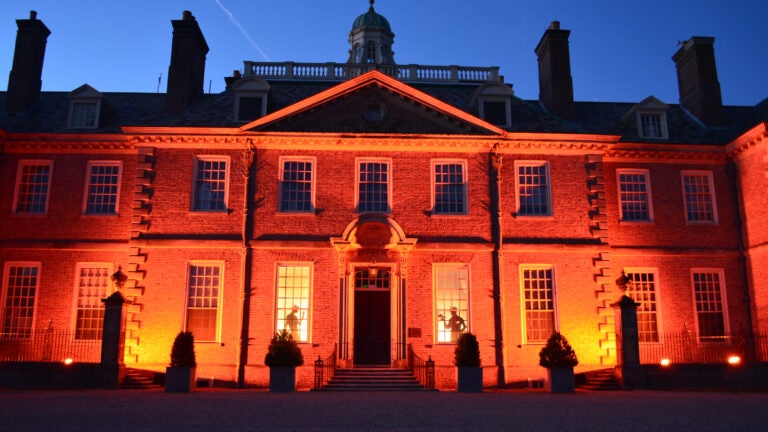