Summer may be winding down, but outdoor festivals and activities are still in full swing. Here are six ways to have fresh-air fun across New England this September.

Step back in time at King Richard’s Faire in Carver

You can watch knights joust on horseback at King Richard’s Faire, billed as New England’s largest and longest-running Renaissance festival. (It’s been entertaining audiences in Carver for more than 35 years.) From Sept. 1 to Oct. 21, the 80-acre wooded site will be full of performers, decked out in Renaissance garb, who do everything from juggle to eat fire to sing. Try your hand at games like darts and archery, hop on a carousel, and watch comedy, dancing, stunts, and other entertainment from the era. When hunger strikes, you can gnaw on a turkey leg and wash it down with a drink from the Dragon’s Nest.

Listen to live music on the waterfront in Providence, Rhode Island

Close out the summer with live music and water views at the Rhode Island Music and Arts Festival, taking place Sept. 14-15 in India Point Park. More than a dozen bands will play at the inaugural event,  including Ripe, Perpetual Groove, Passafire, the Mallett Brothers Band, Lawrence, and the Ryan Montbleau Band. Restaurant vendors will provide food for hungry music fans, and a beverage tent will have beer, wine, spirits, and soda.

Immerse yourself in Scottish culture in Lincoln, New Hampshire

Hey, Sassenach, are you a major fan of “Outlander”? Head to the 43rd Annual Highland Games & Festival at Loon Mountain Sept. 21-23. The festival, billed as the largest Scottish cultural event in North America, will offer several free classes and seminars throughout the weekend. Scottish bands will take the stage and 30 pipe and drum bands will perform. There will be living history encampments, Scottish cooking demonstrations, and “heavy athletic competitions” between athletes from around the world who will compete in tasks such as the hammer throw and the stone carry. Sorry, Jamie Fraser won’t be there, but the festival is expected to draw 35,000 people.

Gather underneath an elegant white tent and sample Vermont-made beverages and foods at the Killington Fall Festival on Sept. 22. Formerly known as the Vermont Cider Festival, the event has expanded and this year will offer Vermont cider and beer tastings, locally-made crafts, and local farm and food samples. When you’ve had your fill, you can take part in family-friendly activities such as fishing on Summit Pond, pumpkin painting, and pony rides. Children under age 12 get free admission.

The interior of a Camp Carriage at Sandy Pines.

Glamp out in Kennebunkport, Maine

Have you perfected the art of making s’mores over a campfire? You can prove your prowess by entering a s’mores recipe contest during the Great Maine Camp Out at Sandy Pines Campground Sept. 22-23. The campground, famous for its glamp tents, is hosting a weekend of family-friendly activities that will also include a scavenger hunt, crafts for kids, and a burger bash and group bonfire where families can mingle. Book your campsite here.

Eat so much chowder in Westport, Connecticut

You can help decide the best chowder in New England at the New England Chowdafest on Sept. 30 at Sherwood Island State Park. Festivalgoers will get unlimited samples of chowder and a ballot to vote for their favorite in five categories: classic, traditional, creative, soup/bisque, and vegetarian. The chefs making the iconic New England dish hail from 40 restaurants across New England. As a bonus, the park boasts a beautiful view of the Long Island Sound. Tickets can be purchased here. 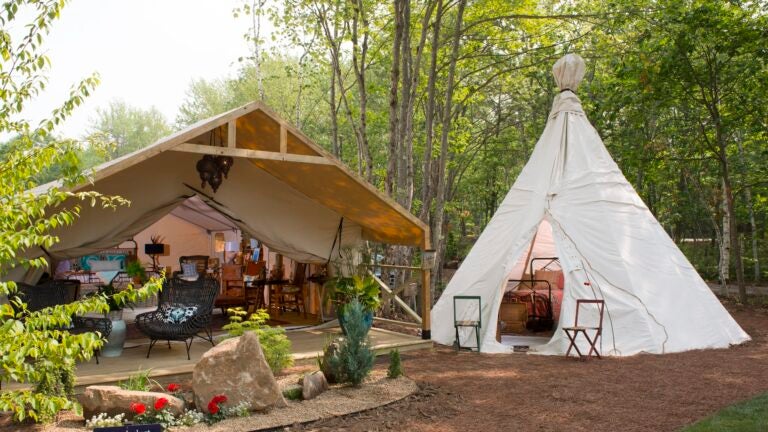