With schools back in session and all things pumpkin-spiced making a reappearance, it’s beginning to feel a lot like autumn.

And while the fall foliage made a “very” late appearance last year, meteorologist David Epstein thinks New England is on track to see a more standard season for leaf-peeping in 2019.

In general, Epstein said he expects the first colors will appear in northern New England in the last week of September, with more developing in early October.

“Then it starts to migrate southwards into central New England around Columbus Day, heading into just west of Boston when the Head of the Charles is going on and then in Boston just before Halloween, moving south from there,” he said.

What all leaf-peepers should look out for is early freezes or nor’easters that bring heavy rain and wind in October.

“Those can decimate the foliage season really fast,” he said.

Ahead, what Epstein and other experts are saying about the foliage in a few of the New England states. 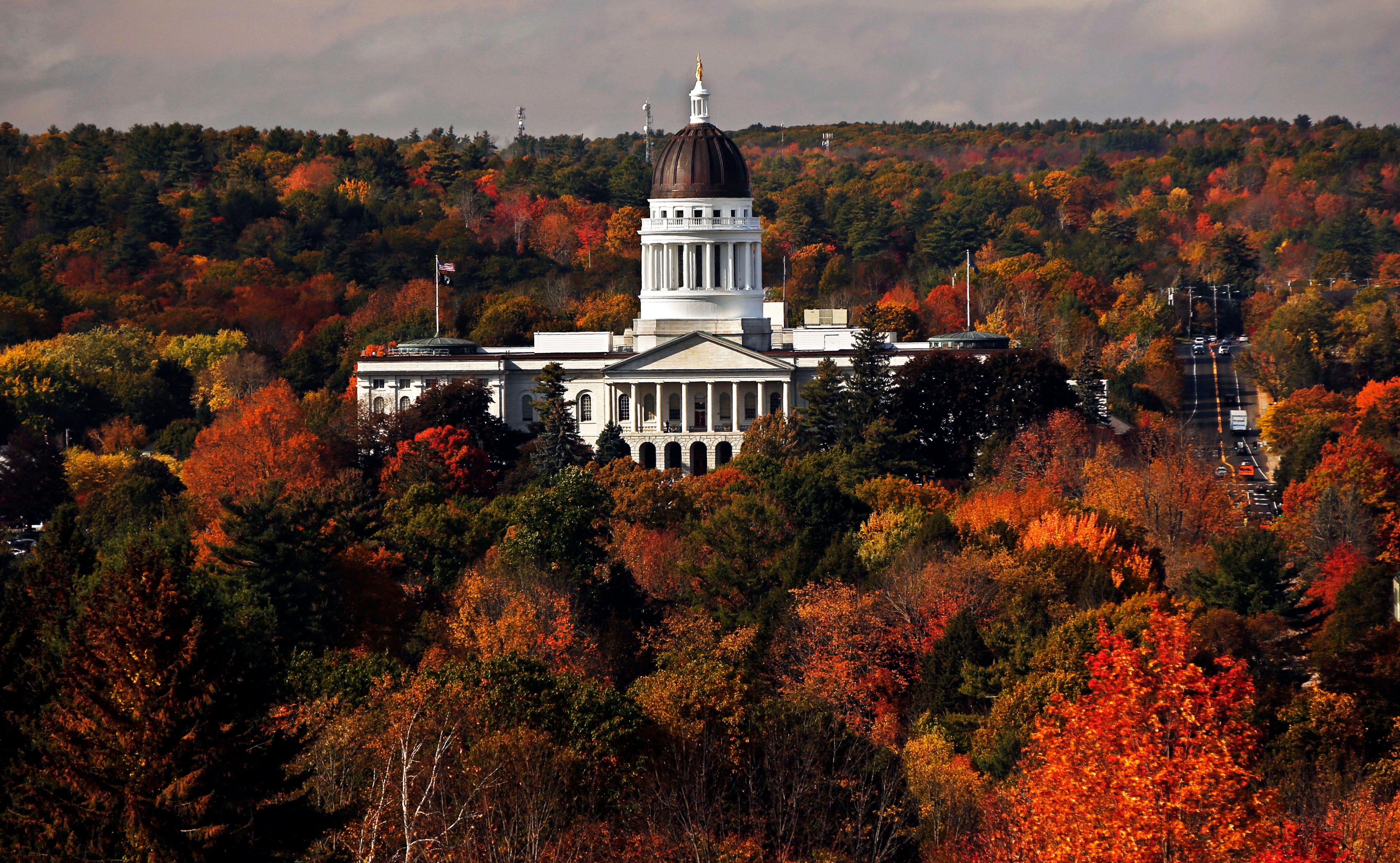 Aaron Bergdahl, a forest pathologist at Maine’s Department of Agriculture, Conservation, and Forestry, said in a statement to Boston.com that he believes 2019 will be an “excellent fall foliage season” in Vacationland.

“While in some parts of Maine people may notice color change developing a bit earlier than usual due to droughty summer conditions, peak color should develop normally from north to south with a full palette of vibrant colors reflecting our diverse and overall healthy forests,” he said.

In Maine, the foliage season typically begins in mid-September and continues through at least Indigenous Peoples’ Day.

Those interested in leaf-peeping in Maine should consider starting up north with higher elevations, and then, as the weeks go by, following the color as it drops down into the central, western, and southern parts of the state. The state tracks the changing of the leaves with weekly reports, which you can subscribe to, and an updating map. 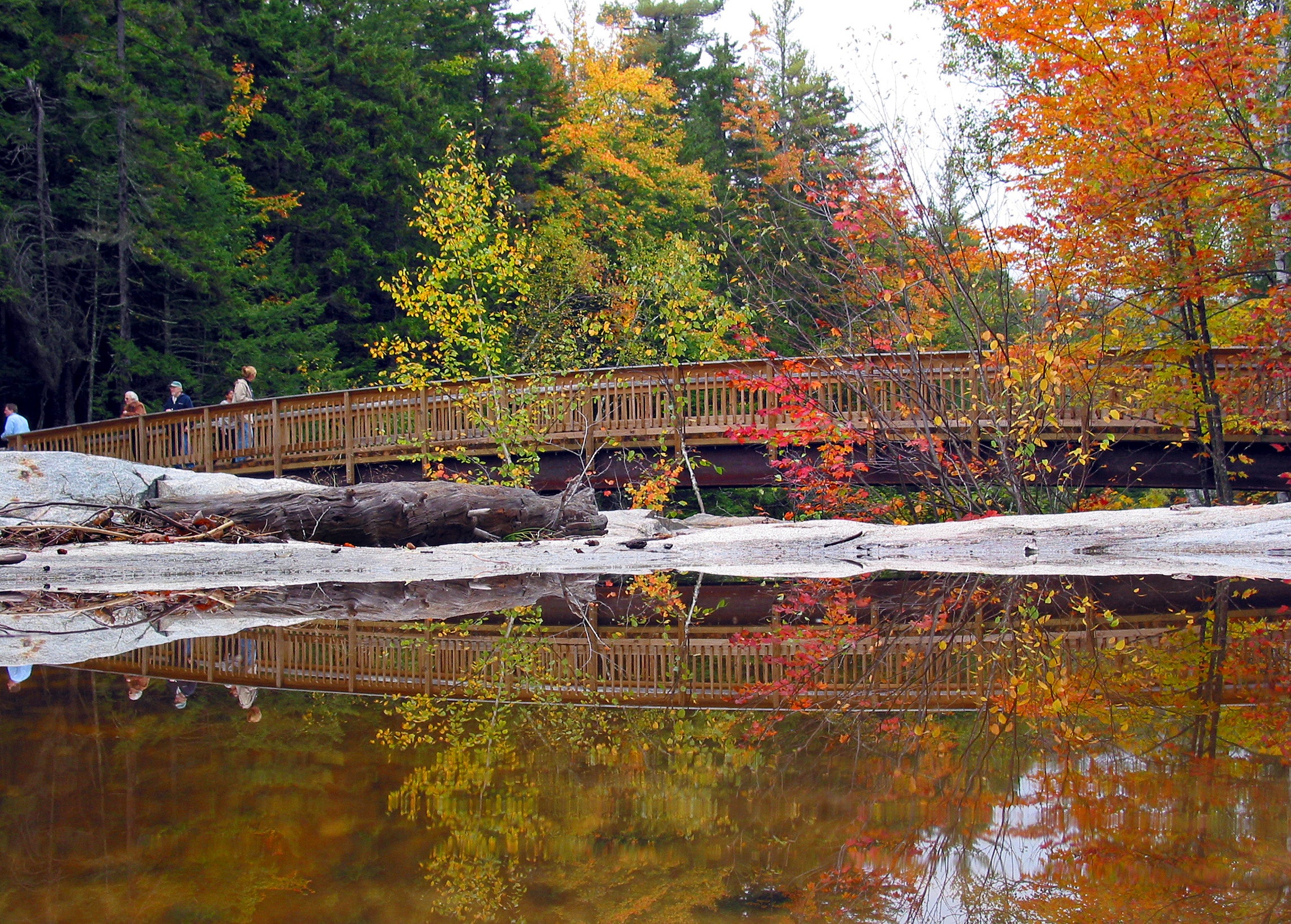 The Rocky Gorge off the Kancamagus Highway in Passaconaway, New Hampshire.

Karen Bennett, a forestry state specialist with the University of New Hampshire Cooperative Extension, told Boston.com the weather during the foliage season is the best predictor of the quality and vibrance that will be witnessed.

“It’s really like baking a cake,” she said. “And every time you put in the same ingredients, the cake comes out differently.”

But if you have healthy trees going into the season, you have a higher likelihood of seeing “good” foliage, she said.

In New Hampshire, the foliage season starts earlier in the northern part of the state and at higher elevations. In those areas — north of the White Mountains — the “peak” is usually at the end of September, while for the central and southern areas it’s typically around Columbus Day weekend, she said.

The leaves will change regardless of the weather during the season, since the color change is based on the length of the days, which indicate to the trees that winter is on its way, Bennett said.

“I always say that we’re going to have a brilliant and resilient foliage season because inevitably we do,” she said.

The color changes come from the trees shutting down the production of the green pigment chlorophyll, leaving the other pigments in the leaves to show.

“What counts as the kiss of color — the real brightness — is the cold weather,” Bennett said. “And what the cold weather does is it encourages the production of a few other pigments.”

Those cold temperature-nurtured pigments fill in shades of reds, blues, and purples, combining with the existing oranges and yellows, to make the foliage brighten, she said. So what will really make the foliage “pop,” she said, is if in September the state sees cold nights — close to a frost — followed by days that are bright and sunny and warm.

The state’s Department of Tourism has a color-changing map that tracks the foliage for the season, alerting visitors to where “moderate,” “peak,” and “past peak” leaves can be seen. 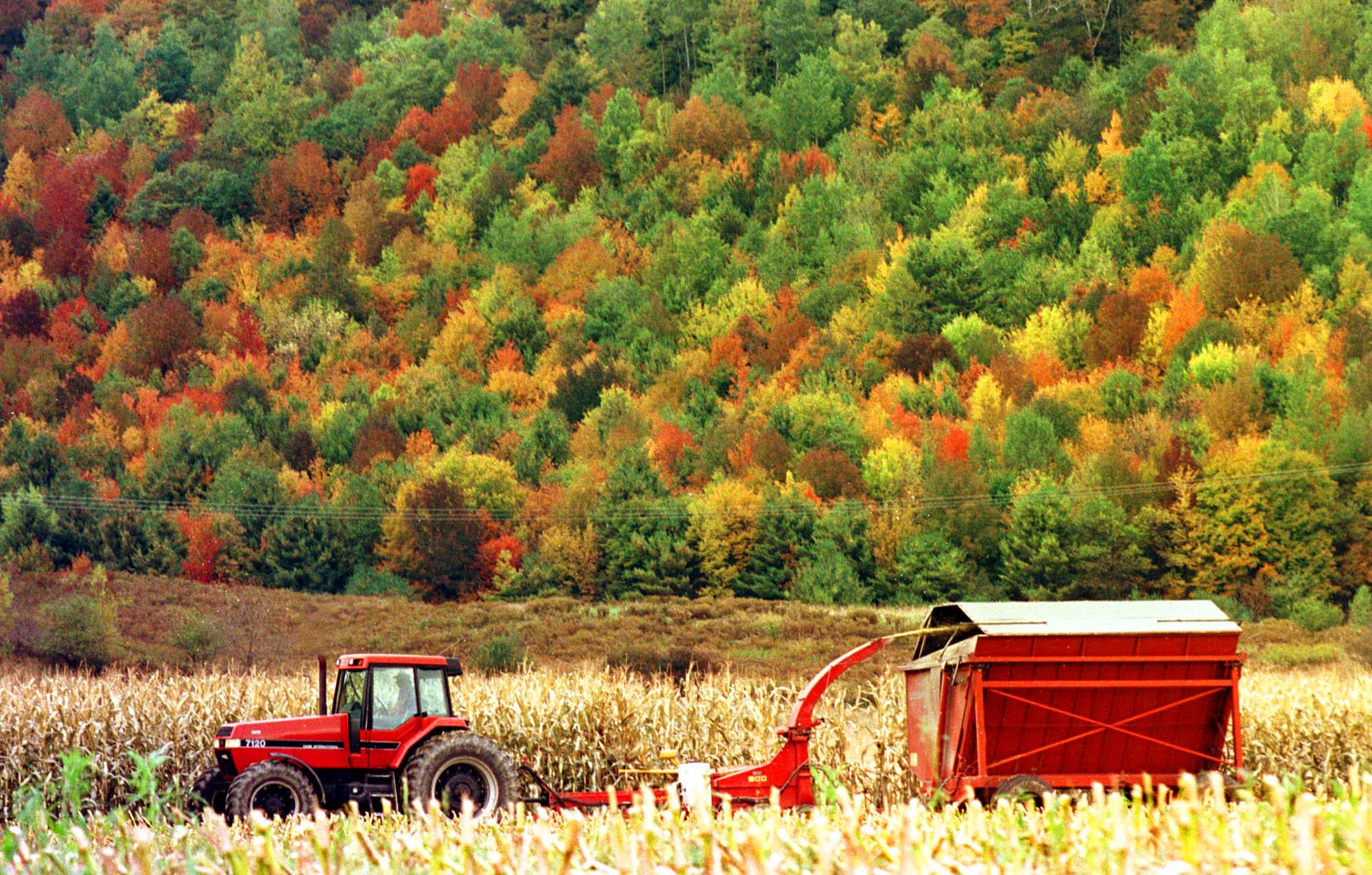 It’s been a great summer for trees in Vermont, according to Michael Snyder, the Vermont state forester and commissioner of the Department of Forests, Parks, and Recreation. There has been a normal — that is, minor — amount of defoliation from insects and fungal diseases, and overall the Green Mountain state is living up to its name with trees that are a vibrant, rich, and green.

“I’d say all the precursor conditions are in place — we expect another fabulous fall foliage season,” Snyder told Boston.com.

The days getting shorter will be the first trigger for the color.

“Once that happens then it’s a matter of local weather conditions in the fall ramp up,” Snyder said. “Generally that has meant peak — the condition defined as most intensity and variety of color across the largest area — is going to happen in the last week of September, in the first week or so of October.”

Farther north and at higher elevations, it will occur a little earlier, while in the southern and western parts of the state, it will show up a bit later.

In recent years, Snyder said he has observed that the color seems to have developed more gradually, lasting through middle or even late October in southern Vermont.

Those interested in tracking the changing colors, can sign up for email updates or check out the Department of Tourism’s “foliage forecaster” map. The view of Easthampton, Massachusetts, from Mount Tom State Reservation.

Last year, Massachusetts saw just an “OK year” for foliage, with a warm August with high humidity leading to a season that came in smaller waves, Epstein said.

This year, he said the dryness and cooling-off experienced during the end of August might mean a more “typical foliage” season for the Bay State, compared to the more “splotchy season” witnessed in 2018.

In Massachusetts, the trees tend to start turning in the Berkshires, followed respectively by the Worcester hills, MetroWest, Boston, and Cape Cod.

“It’s a big state, so there’s no peak weekend in the state,” he said. “Columbus Day weekend through right before Halloween is the foliage season.”

For those looking to take in the colors in Massachusetts, Epstein recommended traveling on rural roads at higher elevations, particularly if you want to go out early in the season.

He also recommended not waiting for the colors to reach the “peak.”

“The idea of peak is sort of a misnomer,” he said. “Because by the time all the leaves have peaked, a lot of the leaves have fallen off. You want to think about, ‘Let’s go for a couple of weekends and see how things have progressed.’ Not, ‘We’re going to go on Sunday — there’s the peak, it’s all over.’ That’s not how it works.” 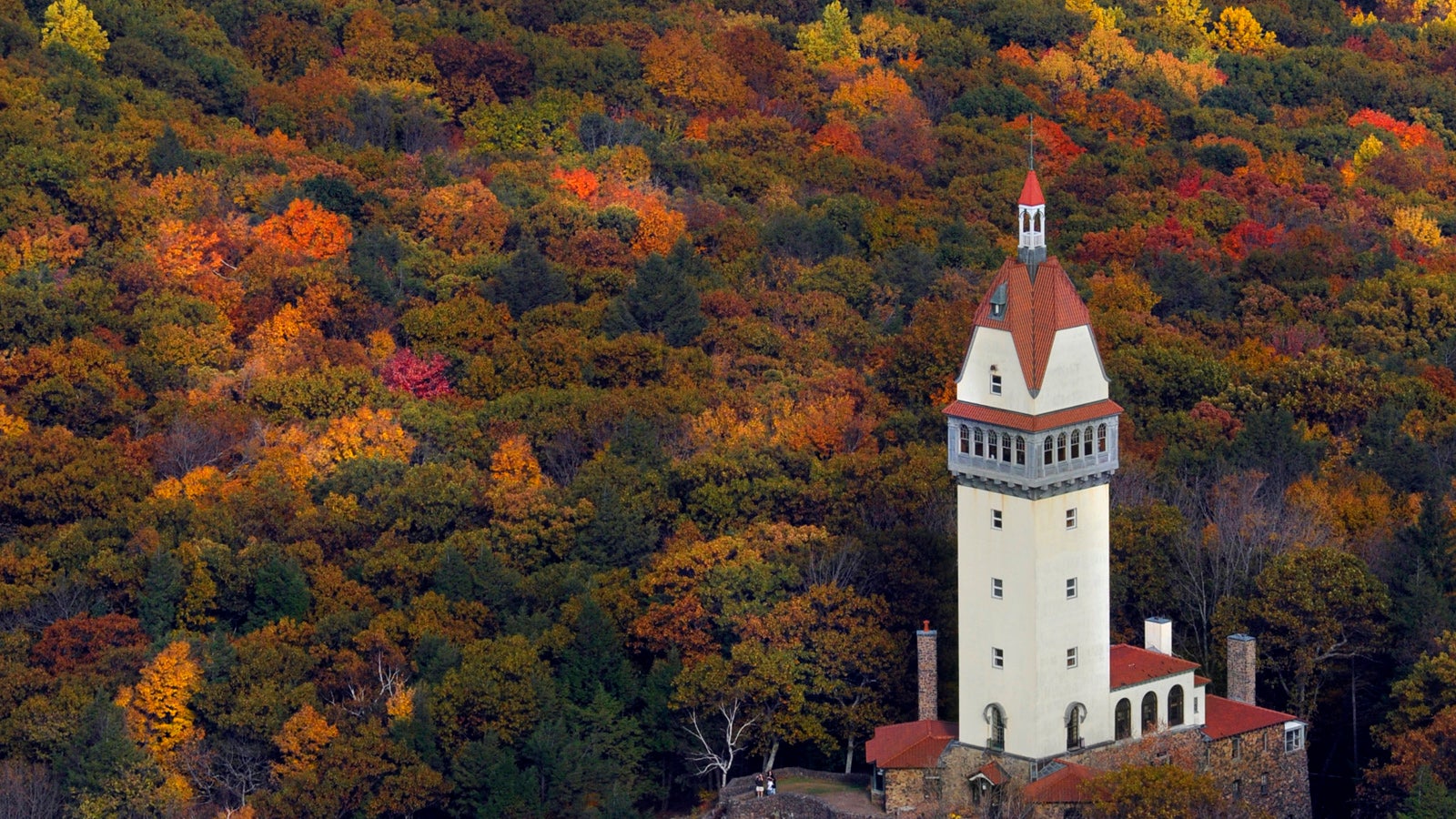 The Heublein Tower atop Talcott Mountain in Simsbury, Connecticut.

Chris Martin, forestry director at the Connecticut Bureau of Natural Resources, thinks it’s going to be a “vivid year” for colors this fall.

“It’s been a good summer for rain, so the trees are in pretty good health,” he said. “September really will influence the timing and the brilliantness of the colors. We’ve had warm, humid Septembers in the past and that kind of delays things and dulls things a bit.”

Overnight temperatures in the 40s particularly during the latter half of the month will set the state up nicely, he said.

“If September cooperates with cool nights, we will see a lot of color that week, the 14th to the 19th [of October],” Martin said. “It’s possible it could get pushed to the week of the 21st. But that three-day weekend could be pretty good if September behaves itself.”

The forester said what he thinks sets Connecticut apart from other states for autumn foliage in the region is the diversity of its trees, which helps it see color right through the middle of November down the coastline.

Columbus Day weekend is typically when the state starts to see “peak” color, particularly in the higher elevations of the northeast and northwest corners of the state.

From there, it usually moves north to south.

“The mouth of the Connecticut River, lower Middlesex County, is the last portion of the state to change,” Martin said. “[It’s] just more temperate there.”

In that area, peak usually occurs during the second week of November. The Nutmeg State tracks foliage with this interactive map. It also issues reports on the season.