This year’s fall foliage season may not live up to last year’s, and for that you can blame our dry summer, according to meteorologist David Epstein.

Last year was a banner foliage year due to adequate moisture and weather that was “pretty close to ideal,” Epstein said, while this year’s drought in the region has put stress on the trees.

That said, leaf-peepers won’t be disappointed, he said.

“The reality is, even a bad year of foliage in New England is a great year to go look at the foliage,” Epstein said.

Epstein said folks plotting their foliage adventures shouldn’t get hung up on the word “peak,” which he considers “a little bit meaningless.” The foliage season offers great color throughout, he said, from late September in northern New England through early November in southern New England.

“You can always find somewhere to go look at foliage in that six-week period, I would say,” he said. “2020 has disappointed us and thrown us some surprises. But the leaves will still change color.”

It’s a good idea to check state tourism websites before traveling out-of-state due to possible travel restrictions because of the coronavirus pandemic.

Ahead, check out what experts are saying from several New England states about the 2020 foliage season. 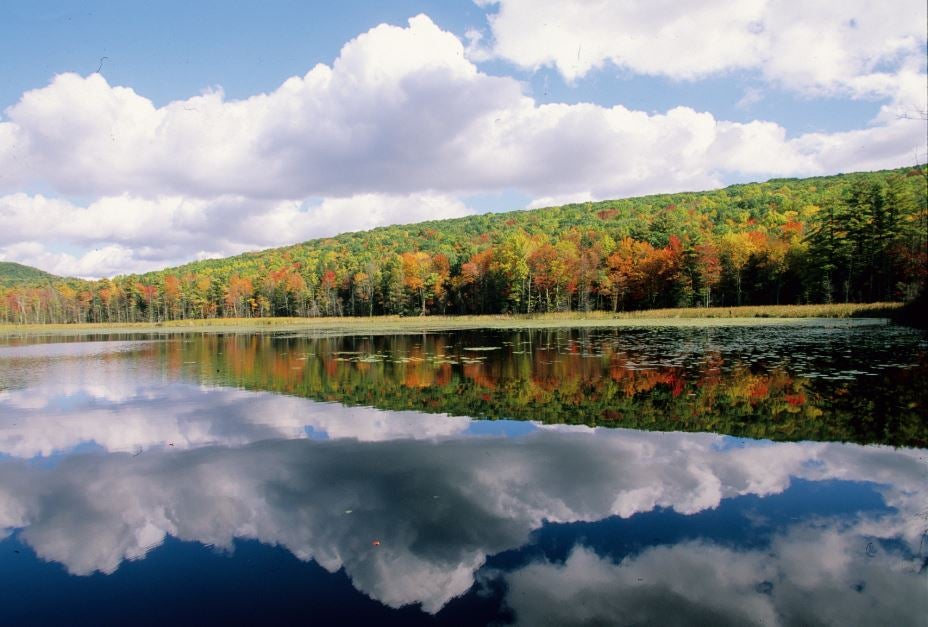 The Massachusetts Department of Conservation and Recreation (DCR) expects a shorter foliage season this year, with leaves that aren’t as vibrant as last season due to this year’s dry conditions. Peak foliage in Massachusetts will likely take place earlier than usual, according to DCR, with maple trees peaking in early October and oak trees in late October.

“It’s a beautiful time of year,” said Keiko Matsudo Orrall, executive director of the Massachusetts Office of Travel and Tourism. “And this year, because of COVID-19 travel restrictions, we’re encouraging Massachusetts residents to explore the foliage magic right here in Massachusetts.”

Orrall said the Commonwealth’s communities help to make foliage trips so special this time of year.

“It’s the variety of places that there are to explore the foliage in Massachusetts that makes it so unique,” she said. “You can go from the places in Boston, near the coast, and north of Boston, which is a different feel than when you are out in the Berkshires.”

Leaf-peepers looking for color close to Boston should head to the Emerald Necklace and Public Garden, Orrall said. They can also choose from seven different driving tours in the Berkshires or head to Mount Greylock, the highest point in Massachusetts, for a “beautiful panorama view.” She also recommended checking out the many state parks as well as the Mohawk Trail, she said. 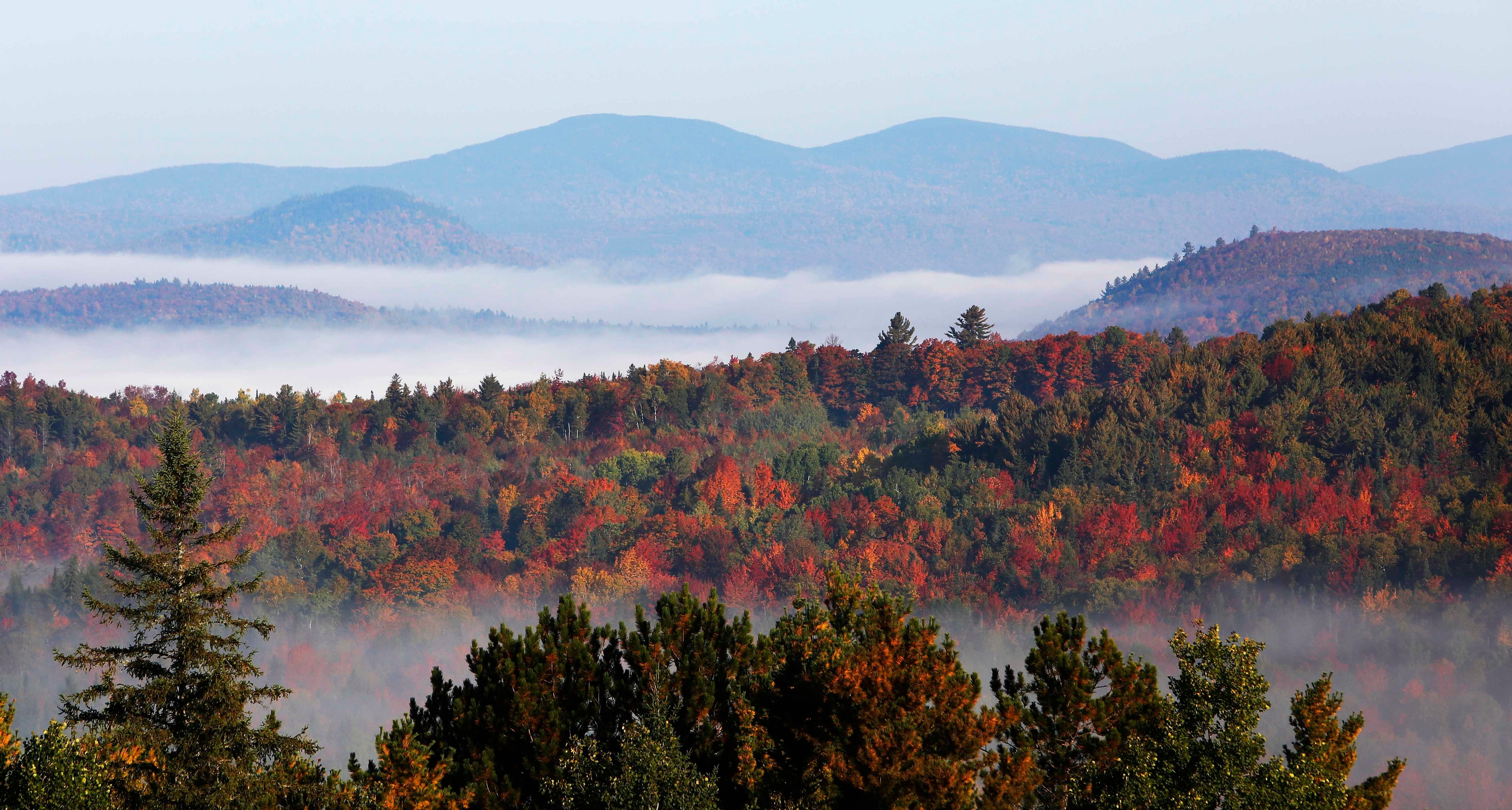 View of the White Mountains from Milan Hill in Milan, N.H.

“We anticipate a beautiful show of leaves with some dazzling colors that New Hampshire is really known for,” Harnois said.

“You can technically go from the seacoast to the mountains to the lakes all in one day if you really wanted to,” she said. “All that variety within a close proximity makes New Hampshire really special.”

New Hampshire is also home to Mount Washington, the highest peak in the northeast, Harnois noted, which “creates a great backdrop, especially during the fall foliage season.” A great way to view the foliage, she said, is from the Mount Washington Cog Railway, the world’s first mountain climbing cog railway.

Whether visitors leaf peep by boat, railroad, car, or zipline, there are many ways to see this season’s colors in New Hampshire, Harnois said.

You can follow the foliage reports and plan your fall adventures at visitnh.com. 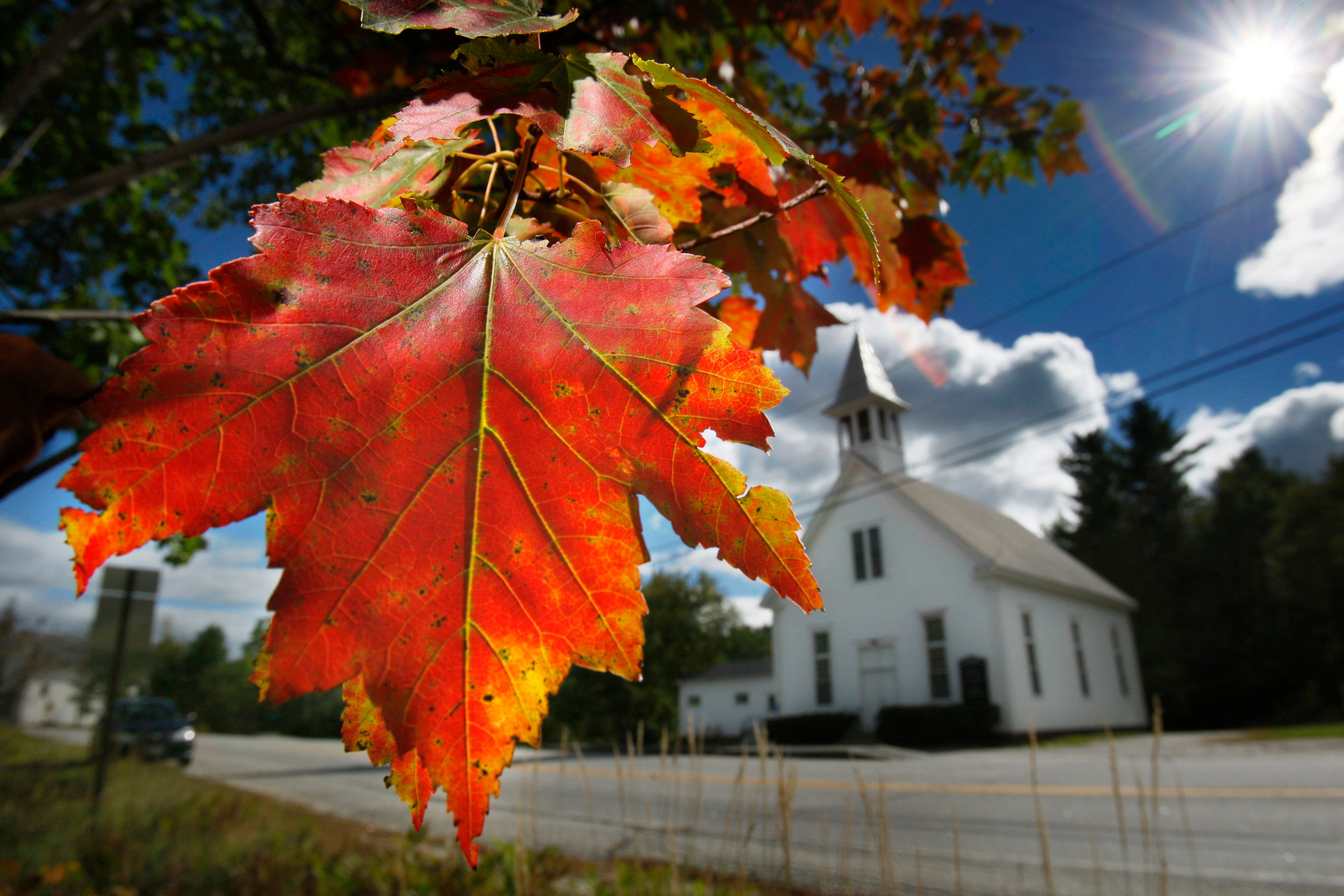 In this 2010 photo, a maple tree shows its fall colors in Woodstock, Maine.

Gale Ross, fall foliage spokesperson for the Department of Agriculture, Conservation, and Forestry in Maine, said she expects a “typical foliage season” in Maine this year, and peak conditions will take place throughout September and October, she said.

“According to our forest pathologists, the forests are in good condition, and we should be able to look at a healthy and diverse forest for this season,” Ross said.

“Maine is just so beautiful this time of year,” she said. 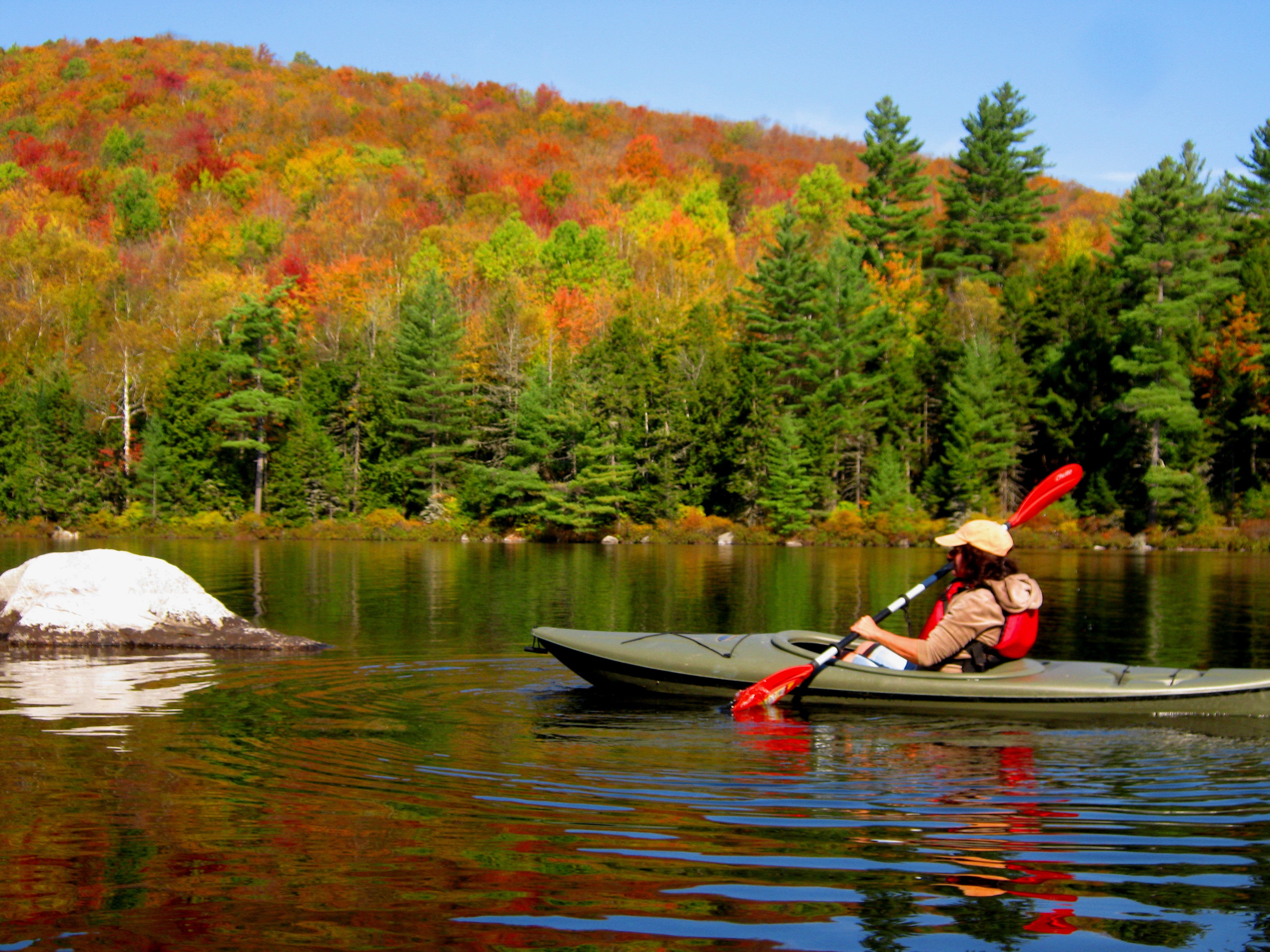 “With sunny days, crisp, cool nights, and a little bit of moisture here and there — which is exactly what we’ve been having — that’s the recipe to turn healthy summer growth into really brilliant colors,” said Michael Snyder, Vermont state forester and commissioner of the Department of Forests, Parks, and Recreation. “All the ingredients are there so far. It’s all on track. It’s really now down to how does the weather shape up in the next few weeks.”

Assuming the state has seasonable weather this fall and a hurricane or snow storm doesn’t strip trees prematurely, Vermont is on track to have an “excellent season,” he said. Moderate drought stress on trees can actually “punch up” color this time of year, Snyder said.

Look for peak color during the last week of September through the first part of October, he said, and summer conditions could extend peak into late October. In September, visitors will find the best color in the northern counties, he said, and then as the season progresses, they’ll find it in the southern counties.

“Hike, bike, paddle, visit a farm stand, and get the whole Vermont experience,” Snyder said. “That’ a great recipe for a fantastic Vermont fall foliage tour.” 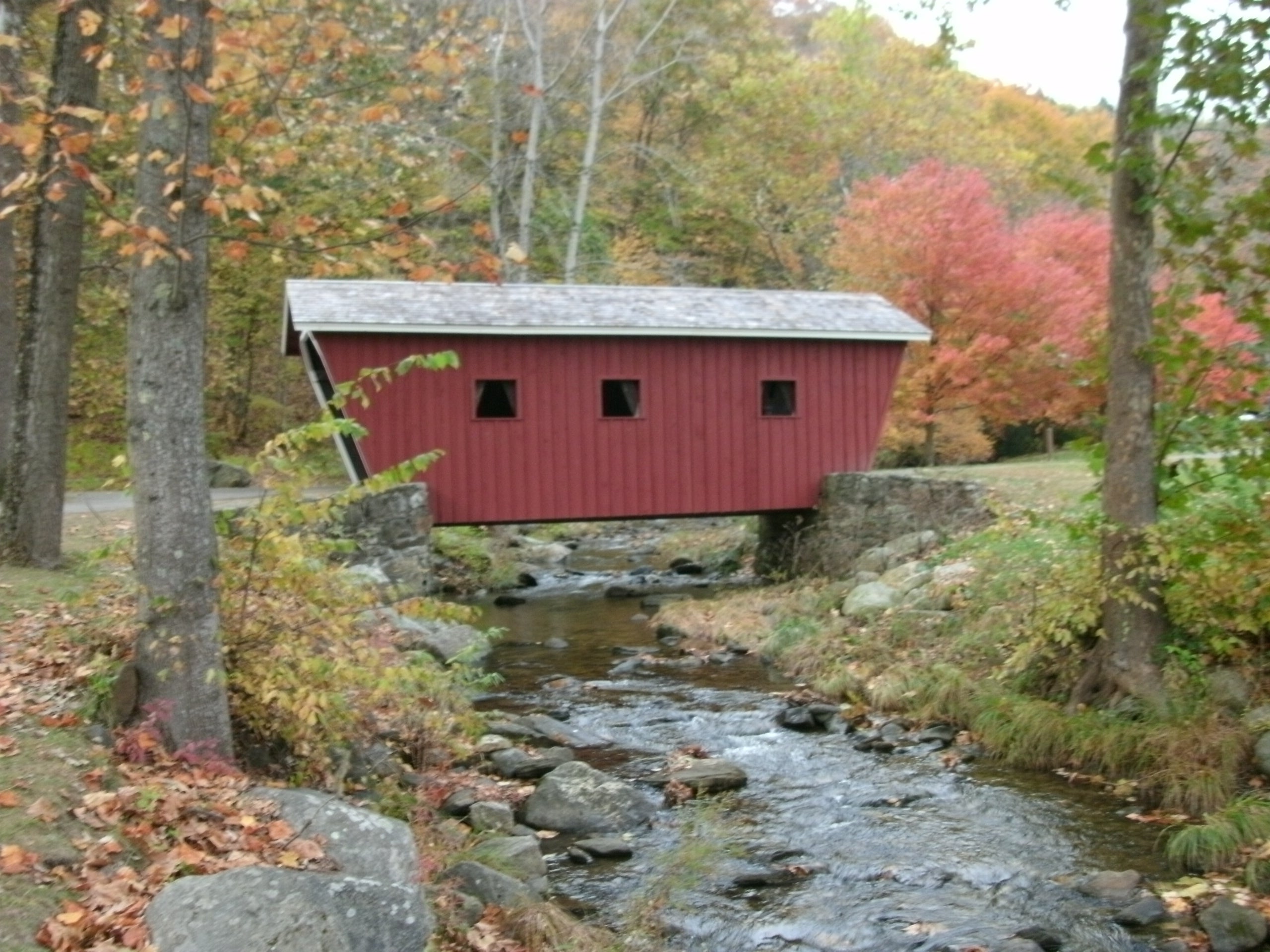 Kent Falls State Park offers plenty of walking trails, waterfalls, and even a covered bridge to view the colors of autumn.

“I think we’re going to have a great foliage year,” said Chris Martin, forestry director at the Connecticut Bureau of Natural Resources. “It’s hard not to, given Connecticut’s diverse forests. We have some of the most varied tree species in the U.S. and certainly in all of New England.”

Current weather conditions will bring an earlier start to the foliage season, he said, and northern Connecticut, which usually shows peak color around Columbus Day, should peak sooner due to the dry weather, he said.

“The drought is certainly something that can’t be overlooked,” Martin said. “But because we have such a variety of trees, no matter what the weather provides, we end up with something that’s great. It’s just a different tree species may be shining its brightest colors differently than the previous year because the weather conditions were different.”

Leaf-peepers will find “phenomenal” views at Mohawk Mountain in Cornwall, the Metacomet Trail in Simsbury, which showcases “dramatic views of central Connecticut,” and Shenipsit State Forest in Stafford Springs, he said. 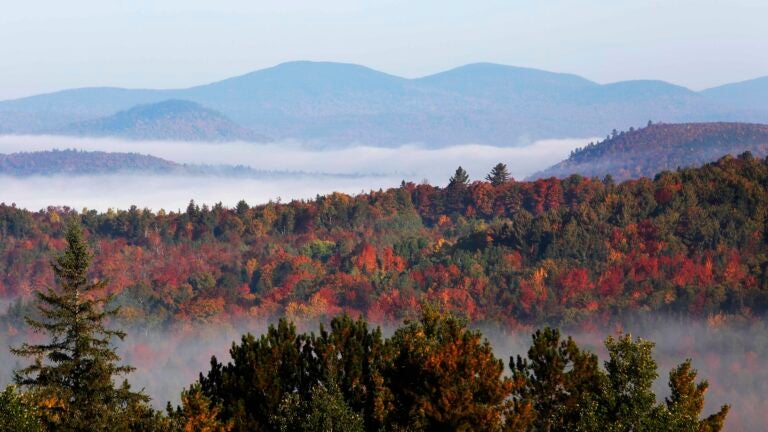 These 2 New England fall foliage destinations just ranked among the best in the U.S.