A mountain in the Berkshires once climbed by 19th century literary icons was just named among “the most beautiful sights in the U.S.” by USA Today.

Monument Mountain in Great Barrington, where Herman Melville and Nathaniel Hawthorne famously hiked in 1850 and had a discussion that inspired ideas for Melville’s “Moby-Dick” while taking refuge from the rain in a cave, made the publication’s list of gorgeous natural wonders nationwide.

USA Today chose one natural wonder for each state, and the other New England picks are Kent Falls in Connecticut, Gulf Hagas in Maine, Flume Gorge in New Hampshire, Mohegan Bluffs in Rhode Island, and Quechee Gorge in Vermont.

Literary giants the likes of Herman Melville and Nathaniel Hawthorne drew inspiration from the views at the 1,642-foot peak of Monument Mountain. Some 20,000 hikers walk in their footsteps to enjoy the scenery each year. Three trails offer views over the Catskill Mountains all the way to Mount Greylock.

The other New England entries include a 250-foot series of cascading waterfalls in Connecticut along the Housatonic River, 200-foot clay cliffs on Rhode Island’s Block Island, and a 400-foot deep gorge dubbed “The Grand Canyon of Maine.” 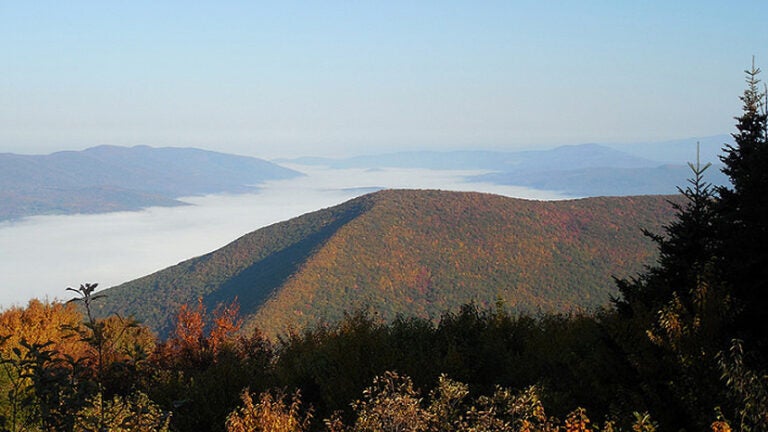 Mass. has 2 of the best fall hiking trails in America, according to Conde Nast Traveler