Travelers seeking overnight accommodations with a possible side of supernatural activity can book a stay at the Henry Derby House in Salem.

The latest unusual experience happened earlier this month. Marchand shared a message a guest sent him, which read, in part: “I was totally following footsteps around the house at 6:15 this morning and no one was there and doors were moving!”

Marchand, who grew up in the Summer Street home built for tailor Henry Derby in 1838, has a few stories of his own.

“Throughout my entire childhood, I always had the craziest dreams in this house,” Marchand said.

A common dream he had as a child? A spirit was trapped on the third floor and trying to escape.

“I’m still, to this day, a little bit spooked out by the third floor,” he said. “Growing up, I would always hear things like footsteps or creaking or sounds in the middle of the night.”

When Marchand was in college, his mother turned the home into a bed and breakfast. He took over the business in 2012 and converted it into a full house vacation rental in 2016. October is an especially busy time for bookings due to Salem’s monthlong celebration of all things haunted (though this year most events are canceled due to the global pandemic).

Marchand has never seen a ghost in his house, but he said other people have.

When his mother ran the business, one of her employees had supernatural experiences, he said. The employee lived on the third floor.

“She said the ghost visited her,” Marchand said. “She had a dream about the ghost and then she woke up. She didn’t see the ghost, but she saw the imprints, like somebody was leaning at the end of the bed.”

The former employee named the ghost Sarah. Marchand said the ghost’s backstory is a mystery.

“We did research the history when we had to get a historic plaque for the house,” he said. “From what I’ve seen, there has never been anything [related to supernatural experiences] to speak of. The researcher did find that some people who lived there had some losses in their family, but that’s common.”

Marchand said the number of hair-raising experiences at his property makes the prospect of a resident ghost hard to ignore.

“I believe she had this experience, because I’ve heard so many other people have had experiences in my house,” he said.

The employee also worked for a ghost tour company in town, so his house became part of the tour, Marchand said.

When he was a teenager, Marchand recalls a time when he was hanging out with his best friend and they heard footsteps upstairs. His friend climbed the stairs to investigate, he said.

Marchand said people who say they’ve seen the ghost have described it similarly.

“We’ve had numerous people see this ghost,” Marchand said. “And everyone describes her as a girl, a regular-looking teenage girl with long hair.” 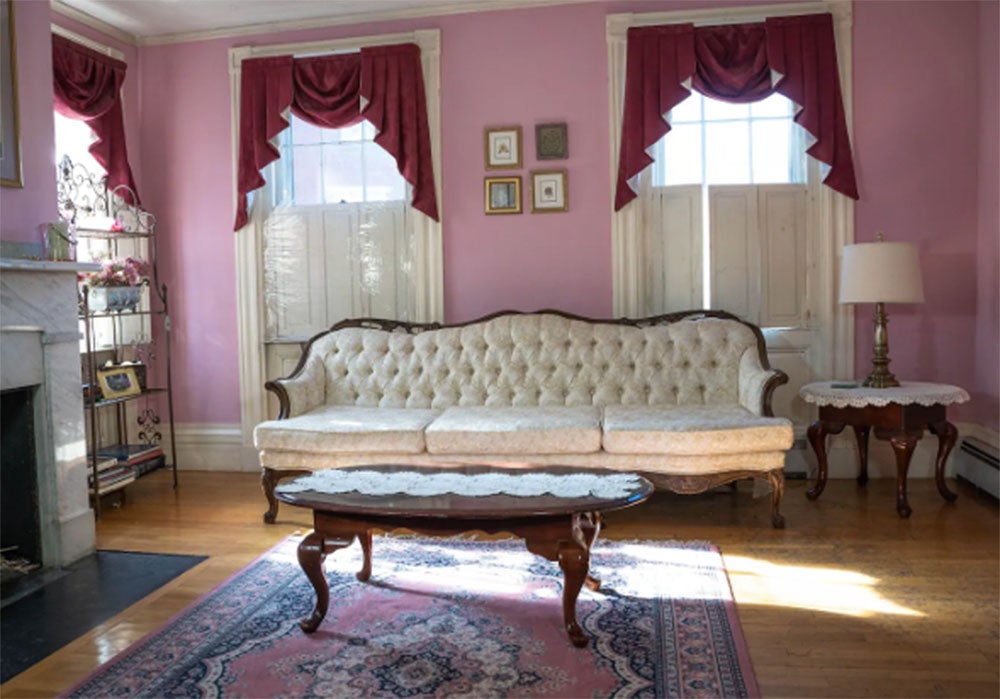 Inside the Henry Derby House.

Several years back, a Canadian guest said she saw the female ghost, as well as another spirit.

“She was the only one who told us we have another ghost on the floor, a little boy,” he said. “She said he claims to be the one with the footsteps that I heard [as a child]. He would often be running around upstairs. We were blown away by her. She was very convincing.”

Most people simply report feeling something strange or reporting that objects have turned up in different places than where they remember leaving them, he said.

Over the years, two different teams of ghost hunters have visited his home, Marchand said.

“They come in with their equipment and they do the investigation,” he said. “And they certainly found the activity that they were looking for.”

Last year, Marchand added a few lines to his Airbnb listing so guests aren’t so surprised when ghost tour groups congregate at the home, he said.

He wrote the following:

“There are stories that this house is haunted, and it is one of the spots on a local ghost tour. We certainly can’t guarantee that this is a haunted house, but I have plenty of stories. :)”

October is fully booked this year and he’s already booking up for next October.

“I tell people I certainly wouldn’t expect to see a ghost or have anything crazy happen in the house, but it definitely has that old spooky house vibe,” Marchand said.

How Salem will be different this October due to COVID-19