Guests can sleep in luxury bunk rooms and relax within a courtyard lounge at Faraway, opening on Nantucket this summer.

The 62-room boutique hotel in downtown Nantucket, comprised of a collection of four inns formerly known as the Roberts Collection, will open with a new look in June after Boston-based real estate development and branding firm Blue Flag Partners bought the property in April 2019 and began renovations this past fall. Life Hospitality will operate the property.

“Faraway has always reflected what we thought was lacking from the hotel scene in one of our favorite places in the world,” said Jason Brown, partner at Blue Flag Partners, in a statement. “It’s a bit of revelry tucked into a historic and refined collection of buildings. It’s like what we imagined might have happened back in the ’20s in Gertrude Stein’s living room in Paris, but on an island.”

Blue Flag Partners drew inspiration from a story its team created of “a woman who grew up on Nantucket, stole away on a ship in her teens and then arrived back on the island decades later with her own ship, a pile of treasure and stories to tell.”

“We loved the idea of designing a space that felt as if she bought this old collection of houses in the center of it all, dropped her belongings — collected over the years on her rum and spice routes — and opened her eclectic residence to those looking for a bit of fun, a bit of inspiration and, always, a good laugh,” Brown said in the statement.

The team moved the entrance and public space of the hotel to Centre Street, where guests now enter through the renovated Meeting House building. Upon entering, they’re met with the reception area and a new cafe. 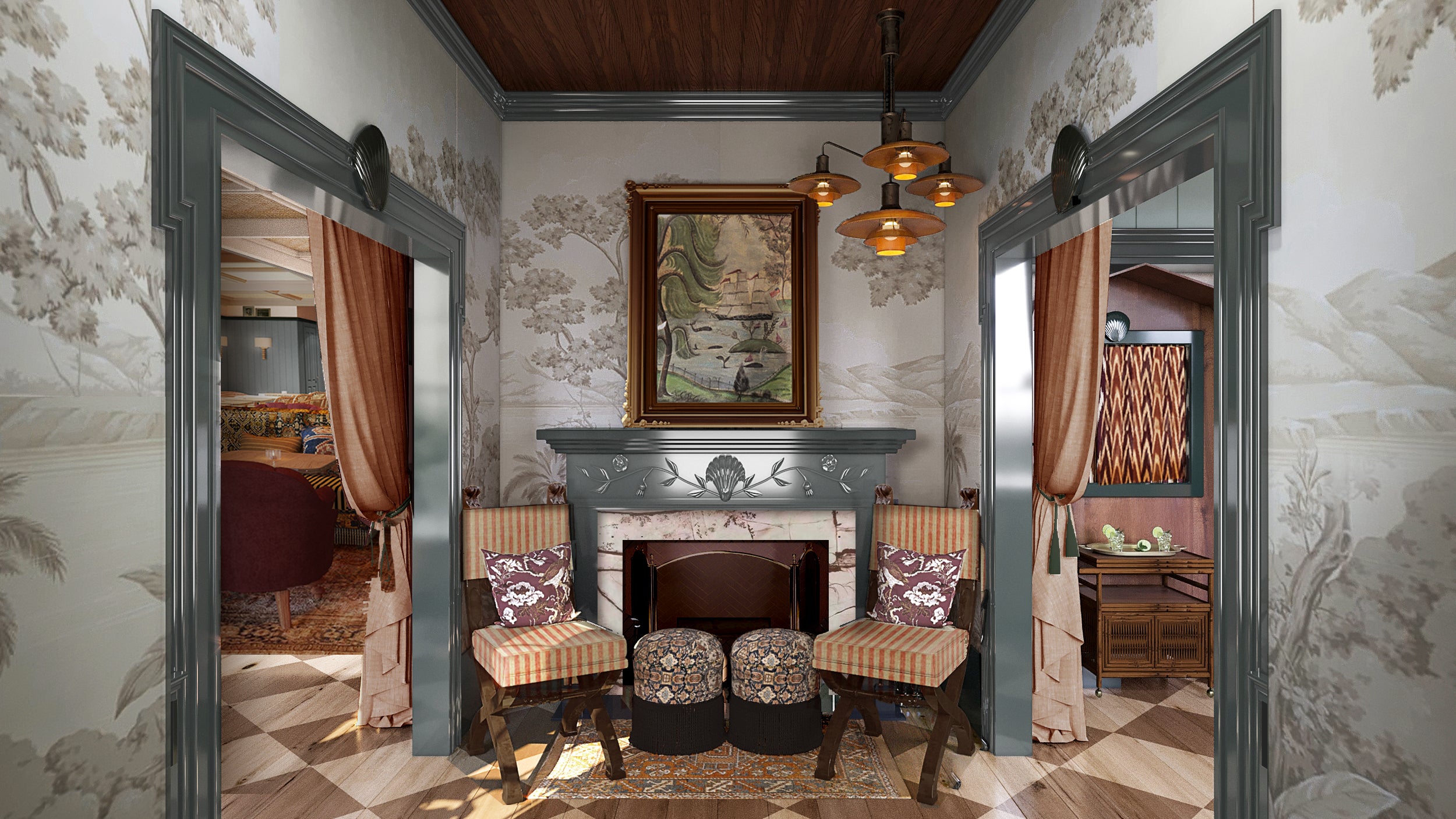 The entry at Faraway.

The guest rooms are spread among the four buildings, one of which is a former 1880s Quaker meeting house, according to Brown. The rooms feature king- and queen-sized beds, suites, and luxury bunk rooms.

The “quad room” offers two bunk beds, a mini fridge, and a private bathroom. It can connect to a queen room for families and groups. 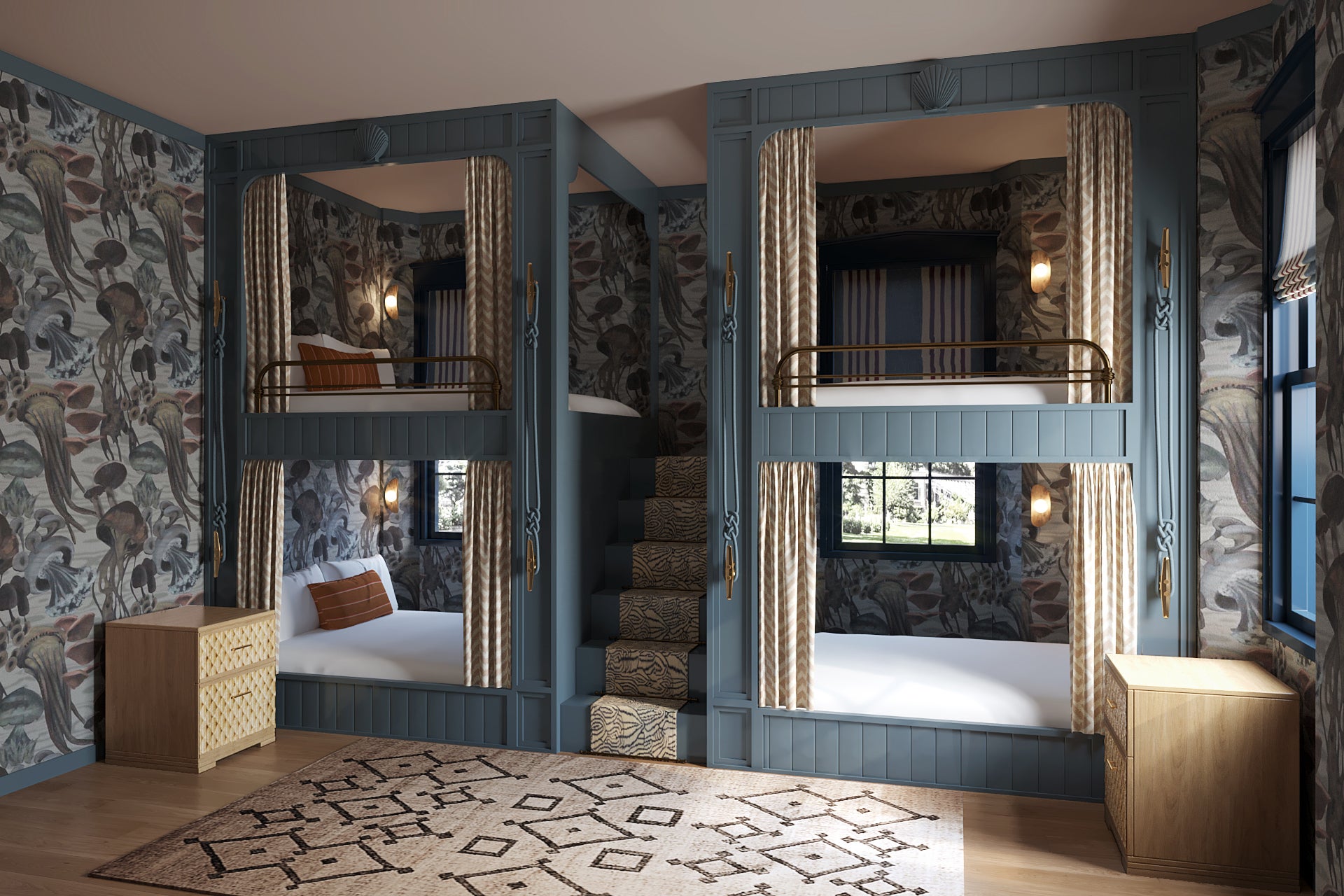 A luxury bunk room at Faraway.

The renovated rooms are “light and airy” with coastal details and “quirky textiles,” according to the hotel’s website. The rooms feature Le Labo products and Revival New York linens. The hotel is also ADA-compliant and pet-friendly. 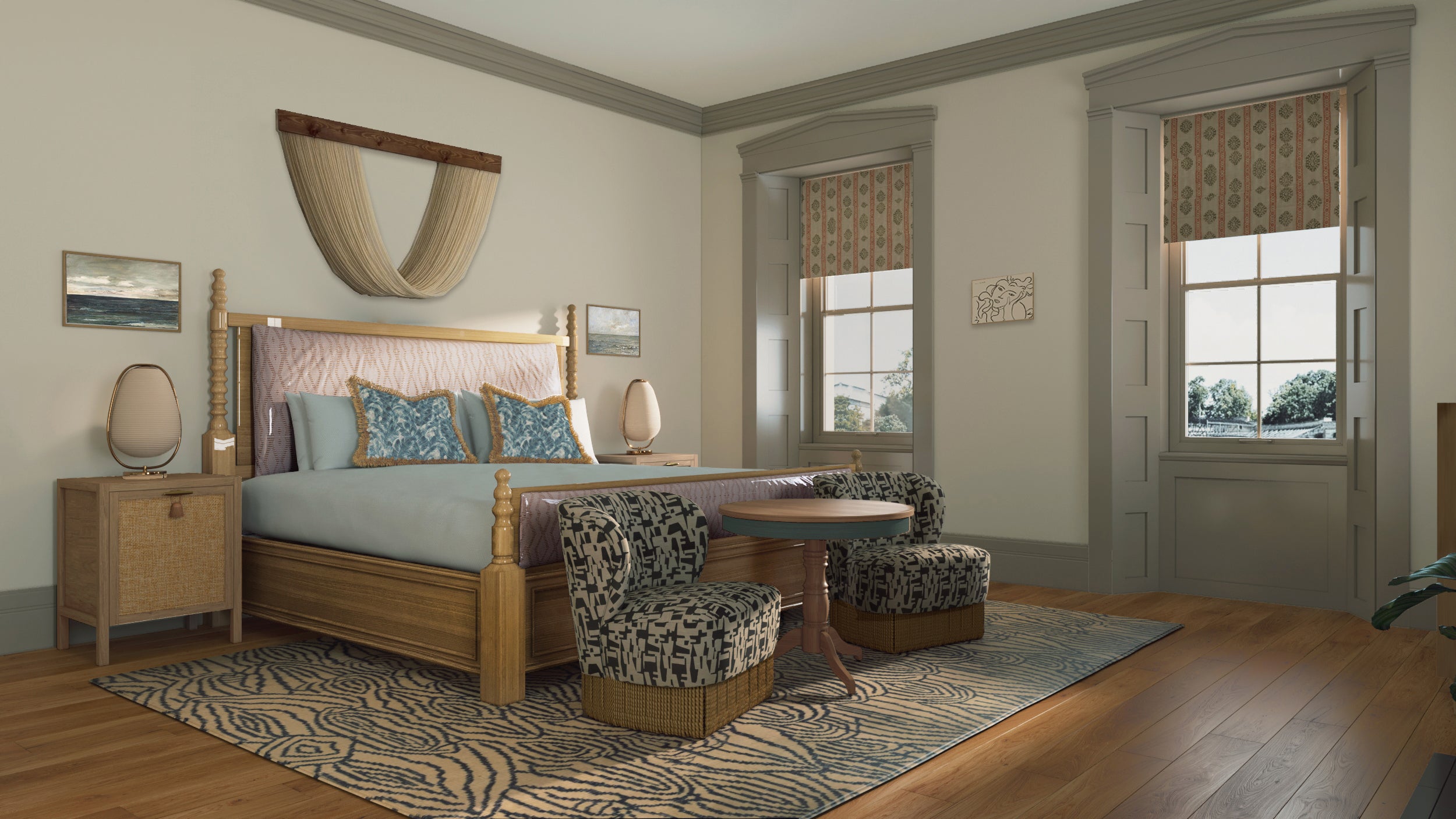 A king guest room at Faraway.

The 140-seat indoor/outdoor restaurant was designed as “an oasis from the busy streets of Nantucket’s historic cobblestone downtown,” according to Blue Flag Partners. The area includes a “luxuriously appointed living room” and private dining rooms, a redesigned garden patio with a grab-and-go cafe window, new deck seating, and a lobby and garden bar.

Brad Guidi, a partner at Blue Flag, called the restaurant “the heartbeat of the property.” 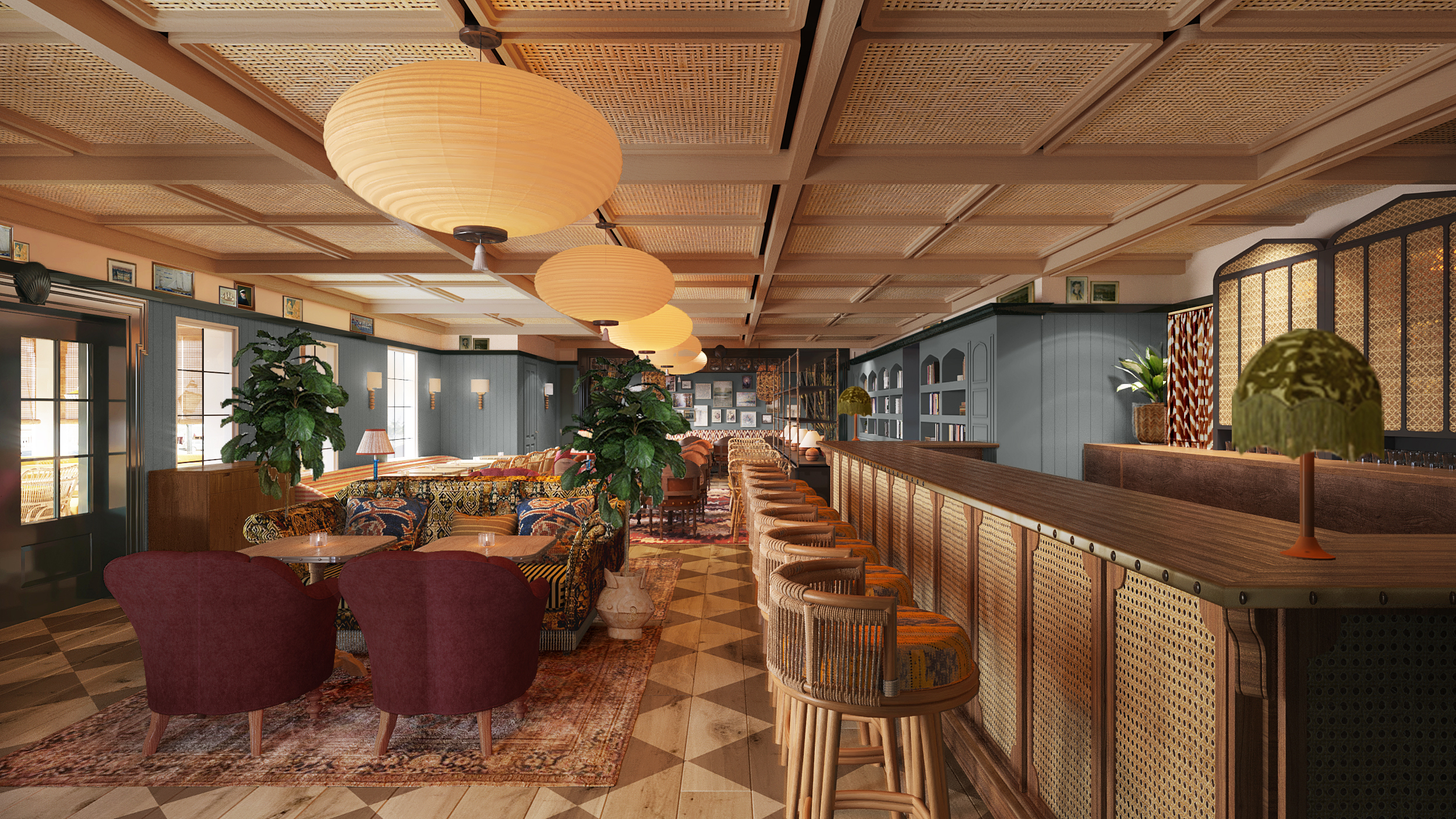 The cocktail bar and restaurant at Faraway.

“Not limited by a single cuisine or vernacular, the concept and menu will be beverage forward, with a focus on an impressive cocktail and wine program alongside high-quality local ingredients,” Guidi said via email. “By creating a communal experience offering a coffee lounge/bar during the day and a full-service restaurant in the evening, we hope to become a clubhouse for our guests as well as those wandering through downtown Nantucket.” 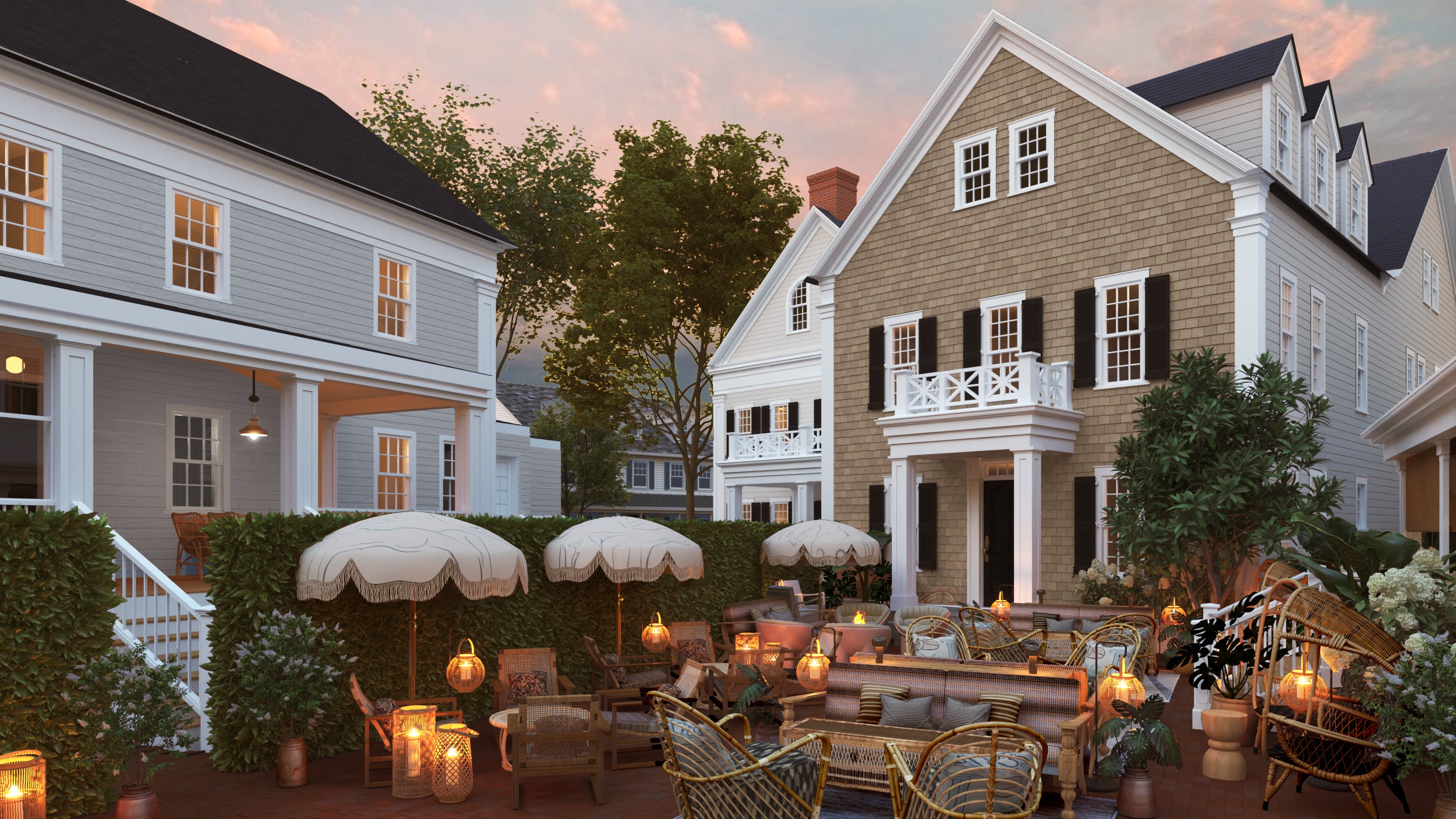 Guests will have access to bikes at the hotel, as well as maps and recommendations for where to explore, according to Blue Flag Partners.

“Overall, we hope Faraway is an oasis for people … a refined, sexy estate from which you can explore the magic of Nantucket,” Brown said in a statement.

King rooms will start in the low $400s per night, plus taxes and fees. 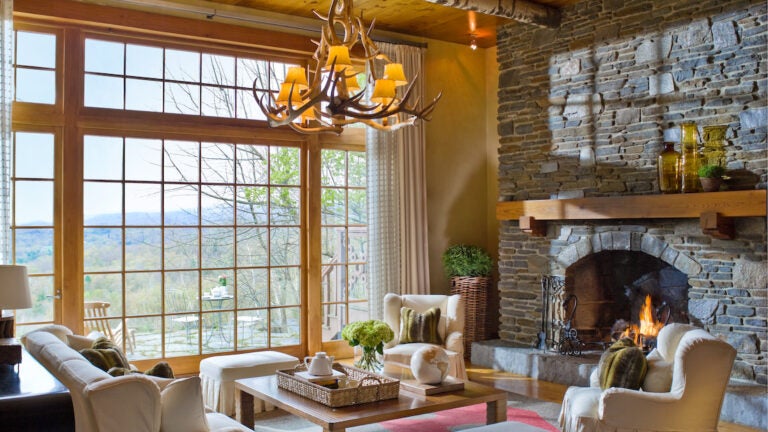 New England has 6 of the 50 best resorts in the U.S., according to U.S. News & World Report