The fine art photographer, who has captured aerial photos of Cape Cod and Maine, as well as other U.S. and international destinations, has wanted to shoot a series of Boston images for some time and finally made it happen this past fall. The former Emerson College student released his first-ever collection of Boston aerial photos on Tuesday.

As Malin shot the images from a doorless helicopter in September, he was flooded with memories of the city, including the fateful day he met his now-husband during the Boston Marathon.

“It was mesmerizing to see this city I love so much from above during a year where I really wasn’t able to go anywhere,” Malin said via email. “It made me really miss the days when I lived in Boston!” “Boston is a beautiful mixture of many different components that were special to shoot — the historical buildings, the lush greenery from the trees and the parks throughout the city, an exquisite coastline that is quintessential New England, and the skyline sprinkled with impressive skyscrapers,” Malin wrote. Another reason the Boston shoot was special: Family accompanied him in the helicopter.

“I have a lot of family that lives in Boston, and this shoot was even more special because my sister and her husband rode in the helicopter with me,” Malin wrote. “It was a wonderful moment since we all share such passion and love for the city.” Before going up in the helicopter, Malin created a list of Boston places he wanted to fly over and researched other key locations for the series of images, he said. Malin also asked fans on social media where they would like to see him shoot, “which was a lot of fun,” he wrote.

“The feedback prompted me to include Crane Beach, so in addition to shooting Boston proper, I also flew along the North Shore and included some coastal towns like Marblehead and Manchester-by-the-Sea into the collection,” he wrote. The harbor in Marblehead.

“I love the photographs of Back Bay, The Boston Common, The Public Garden, and Commonwealth Avenue,” Malin wrote. “My college was located in this area and I also met my husband on the street on Commonwealth Avenue during the Boston Marathon so these locations in particular hold a lot of meaning for me.” The bandstand in Boston Common. 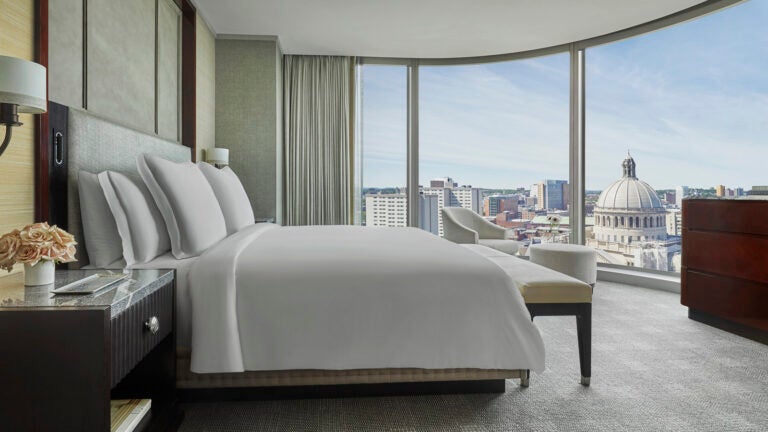 A luxury hotel in Boston just earned 5 diamonds from AAA