If you’re looking for a festive, seasonally appropriate day trip this month, you’d be hard-pressed to find a New England destination that celebrates Halloween as thoroughly as Salem.

Located 16 miles north of Boston, Salem typically welcomes more than half a million visitors during October for its month-long Haunted Happenings, according to Kate Fox, director of Destination Salem, the city’s office of tourism and cultural affairs. The seasonal celebration, which began in 1982, is celebrating its 40th anniversary this year.

Salem was recently named among the best places to travel worldwide in October by Conde Nast Traveler.

“What a privilege to be a destination that is beloved,” Fox said. “People just cherish coming here, whether it’s their first trip or their 40th.”

This map of downtown Salem, along with the following recommendations from Fox, will help you plan your adventure in Witch City. Visitors can also download a free Destination Salem app with information about parking, traffic, attraction tickets, and more.

It takes 30 minutes to get to Salem from Boston’s North Station on the commuter rail, Fox said, and 55 minutes aboard the Salem ferry from Long Wharf.

The City of Salem will provide free satellite parking at Salem Hospital at 108 Jefferson Ave., Salem High School at 77 Willson St., and Salem State University O’Keefe Center at 225 Canal St. during every October weekend. Previously, the city offered shuttle service only during certain weekends. The city has also increased its number of shuttle buses this year.

The free shuttles will run between the lots and Riley Plaza downtown between 10 a.m. and 8 p.m.

“Restaurants can get to a two-hour wait on weekends in October,” Fox said. “So plan ahead and make reservations wherever possible.”

Fox said guests can consider grabbing food to go from Essex’s NY Pizza & Deli or Flying Saucer Pizza. Or visitors can check out a food court full of fair foods on Salem Common, beginning on October 15.

“If you’re looking for a burger and a beer, try Brodie’s on Derby Street or the Village Tavern on Essex Street,” Fox said.

The Roof, which has a full bar and an outdoor kitchen serving tacos, rice bowls, and oysters, is Salem’s only restaurant with rooftop dining.

For families traveling with kids, Fox recommends heading to Red’s Sandwich Shop, located in the historic London Coffee House, which she said has an extensive and family-friendly menu for breakfast and lunch. Also, Rockafellas serves lunch and dinner and offers a “Little Rocks” menu for kids. As a bonus, the outdoor dining area is the perfect spot for people-watching, she said.

“If you are planning your first visit to Salem, start your day early with a Salem Trolley Tour, which will give you a one-hour narrated tour of Salem’s historic district and a great overview of Salem’s rich history,” Fox said.

Guests can choose from more than 30 daytime and evening walking tours, Fox said, which cover everything from ghosts to the city’s history to “Hocus Pocus” filming locations.

It’s also worth visiting the Welcome Center at Charter Street Cemetery, where guests can learn the history of the Charter Street Historic District and  the cemetery. A cemetery map directs guests to significant graves and explains the gravestone art, she said.

Which Salem witch trial destinations should I visit?

Guests can also check out the Salem Witch Museum, where visitors learn the history of the witch trials; the Witch Dungeon Museum, which features a live reenactment of one of the trials and tours through a replica dungeon; the Salem Wax Museum’s self-guided tours; and The Witch House, or Jonathan Corwin House, where trial judge Jonathan Corwin lived, Fox said. The latter is the only location in Salem with direct ties to the trials, Fox said.

Which Salem activities are appropriate (and fun!) for my kids?

On Oct. 7, kids can trick-or-treat with the mayor at area businesses. Fox noted that Salem visitors of all ages who arrive in costume throughout the season cannot wear weapons of any kind, real or fake.

“Families will want to check out the Merchant Marketplace and street performers that will be around town on October weekends,” Fox said.

The Halloween Museum is well worth checking out, too, Fox said.

“It’s a self-guided 3D experience for all ages,” she said. “And it’s very family-friendly.”

What are the COVID-19 guidelines?

There is not a vaccine mandate or indoor mask mandate in Salem. However, all Salem businesses are free to establish their own voluntary safety requirements for visitors and guests should follow those rules, according to the Haunted Happenings website.

There are no capacity limits set by the city or state. Also, there are no travel restrictions for visitors entering Massachusetts, but the state recommends that visitors follow CDC guidelines for travel.

Fox noted that people wary of crowds can enjoy Salem’s offerings another time.

“Most of these things are available year-round,” Fox said. “So if people don’t want to be part of the crowds, we’re here year round.”

What readers are saying about Salem:

“The overall Halloween vibe is unparalleled,” @jsecret53 wrote. “The history, the people watching, the overall intimacy and walkability of the city.”

“The people walking around in witch hats and more,” wrote @mocochinchilove. “Where else could you do that!”

“The fact that you feel like you’re in a Disney Halloween movie when you’re there, which is the best vibe,” wrote @thomas_gage.

“So much to see and do,” wrote @frankiefenders. “Beautiful architecture, cool shops and great places to eat. Salem has a vibe like no other place.”

For things to do:

The House of the Seven Gables — @irishscorpio59, @meghanf0421, Leo Carpenter

The Cheese Shop of Salem — @_jessical_27

The Landing at Salem Ferry — @michaeltrevisani

“I’m so excited to visit this October,” wrote @aashhleyyy. 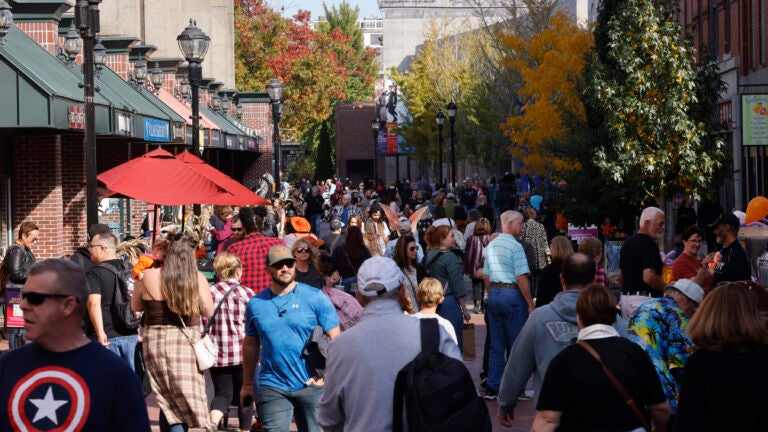