Salem is an indisputable Halloween mecca, with more than half a million visitors descending upon the historic city during October for its month-long Haunted Happenings.

However, New England is full of festive towns that host fun October activities and embrace Halloween. Travelers looking for pumpkins and spooky activities without the massive crowds can explore the following 12 fall destinations.

In the town of Chatham on Cape Cod, recently named among the 18 best U.S. small towns to visit for Halloween by TripsToDiscover.com, visitors can check out Pumpkin People in the Park, an event where local businesses and people create pumpkin people displayed in Kate Gould Park. This year’s event takes place from Oct. 14-31. For even more fall fun, check out Chatham’s Oktoberfest, taking place Oct. 22, which includes a costume parade, live music, and more.

Daring visitors can sleep in the room where the infamous murders of Andrew and Abby Borden took place on Aug. 4, 1892, in Fall River, named among the best small towns to visit this Halloween by Country Living.

The Historic Lizzie Borden House, named one of the most haunted places in America by Conde Nast Traveler, is where the Bordens lived. Lizzie Borden was accused of killing her father and stepmother with a hatchet and then was acquitted. The house is open daily for ghost tours and ghost hunts.

“Guests and employees have reported all kinds of strange activity in the house, including weeping and footstep sounds, an apparition in Victorian-era clothing wandering the halls, doors opening, and closing, and muffled conversations coming from vacant rooms,” wrote Conde Nast Traveler.

Throughout the month of October, the 38th annual Return of the Pumpkin People takes place in Jackson, which means more than 50 pumpkin people created by local businesses are on display. Visitors can follow the pumpkin people map, posted online and in local businesses, during self-guided tours and then vote for their favorite. The All Things Pumpkin Festival, complete with pumpkin activities and horse-drawn sleigh rides downtown with stops for pumpkin treats, did not take place this year but will return in 2023.

“These nightly excursions give an overview of New England paranormal history from a Native American perspective,” wrote USA Today. “The tour includes exclusive nighttime access to the 1932 Criterion Theatre when it’s not in use.”

What’s not to love about this pumpkinfest, which culminates with a regatta, during which participants race down the Damariscotta River in hollowed-out pumpkins fashioned into boats. The Damariscotta Pumpkinfest & Regatta, which took place this year Oct. 7-9, is a celebration of all things pumpkin and also includes a parade, great pumpkin weigh-off, and more than 70 enormous pumpkins on display downtown decorated by local artists.

Damariscotta is also part of Maine’s Pumpkin Trail, which takes place from Labor Day through Halloween and includes activities across 40 miles of Maine’s coastline.

Not only is the Great Vermont Maze in Danville one of the 10 best corn mazes in America according to USA Today readers, but the grounds also include Dead North — Farmland of Terror. Visitors looking for a spooky treat follow the mile-long walk through a haunted cornfield full of scares and scenes, live actors, animatronics, and special effects. The haunted attraction is open during the first two weekends of October each year.

Stowe, well-known for its fall foliage and fall activities, and named among the best small towns to visit this Halloween by Country Living, is also home to one of the most haunted places in America, according to Conde Nast Traveler — Emily’s Bridge. The story goes, the bridge is haunted by a young woman who died there in the 1800s.

“Today, Emily’s ghost is said to maliciously haunt the site, clawing at passing cars and even scratching the backs of pedestrians until they bleed,” wrote the publication. “There are slightly less menacing spooks as well, like images of a white apparition and strange voices and footsteps coming from the tunnel.”

One of the best Halloween events in America is in Providence, according to Country Living: the Jack-O-Lantern Spectacular at Roger Williams Park Zoo. At the pumpkin extravaganza, which takes place throughout the month of October, “more than 5,000 intricately decorated pumpkins transform the zoo into a Halloween wonderland,” wrote Country Living. The pumpkin trail features family-fun nights and there’s also a Soaring Eagle Zip Ride, where guests can glide 115 feet above the glowing display.

Visitors can explore and stay at the farmhouse famous for inspiring the 2013 supernatural horror film “The Conjuring” in Harrisville, named among the best small towns to visit this Halloween by Country Living. The house, built around 1736, is billed as one of the most active paranormal locations in the world.

“This terrifying home served as the real-life inspiration for the film—and the current owners say it’s still very much haunted,” wrote Country Living. “Whether you book a regular tour or an overnight investigation, expect plenty of paranormal activity!”

Mark Twain fans can tour the Mark Twain House in Hartford, where the author lived from 1874 to 1891 and wrote “The Adventures of Huckleberry Finn” and “The Adventures of Tom Sawyer.” The home is especially interesting during October because it is among the most haunted places in America, according to Conde Nast Traveler.

“The billiard room is considered the most haunted spot in the house—it is where Twain used to sit and smoke cigars, and some claim they can smell smoke wafting through the air as they pass through,” wrote the publication.

The Victorian-style Sheffield Island Lighthouse, built in 1868, offers tours from May through September and has been the site of several “mysterious happenings” such as “mystical music coming from the shores, distant cries for help, and the sound of a foghorn—despite there being no foghorn on the island,” according to Conde Nast Traveler, which named it among the most haunted places in America. Some attribute the sounds to the ghost of Captain Robert Sheffield, who bought the islands in the early 1800s, according to the publication. 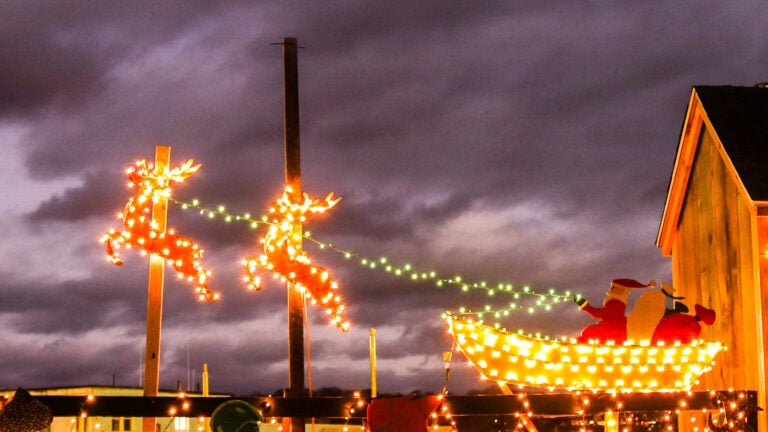