City and town officials across Massachusetts are sharing their favorite places to go for culture, nature, and relaxation in the cities and towns they know so well. Do you want to see your favorite city or town featured? Let us know in the survey below or e-mail [email protected].

The Cape town of Eastham, known as the gateway to the Cape Cod National Seashore, is “a quintessential paradise,” according to Jim Russo, executive director of the Eastham Chamber of Commerce.

More than one-third of Eastham falls within the National Seashore, which is comprised of nearly 40 miles of beaches, ponds, marshes, uplands, and historic sites. It is one of the most visited national park sites in the U.S.

Eastham offers the best of both worlds, Russo said, with bay beaches on one side and the Atlantic Ocean on the other. In between, he said, there’s ponds, trails, marshes, historic landmarks, and more.

Ahead, Russo offers his picks for what to see and do in Eastham.

Hikers will enjoy the “spectacular” Fort Hill Trail, according to Russo.

The trail, a one-mile loop, takes about an hour to complete and encompasses Nauset Marsh, Nauset spit, and the Atlantic Ocean. The trail is also great for bird enthusiasts, according to the National Park Service.

For those who want to prolong their hike, the trail connects with the Red Maple Swamp Trail, a 0.8-mile round-trip that takes about 30 minutes. The trail, which takes hikers into the heart of the Red Maple Swamp, is the most colorful in the fall, according to the National Park Service.

Russo said it’s worth catching a beach sunset in Eastham.

Coast Guard beach was recently named among the top 10 beaches in America by “Dr. Beach” and among the best beaches in Massachusetts by Boston.com readers.

“Bring food, friends, and family. Brink a book. Bring games. Enjoy. And then just wait. As the day winds down the best is yet to come as one of our majestic sunsets caps off your day,” advised Russo, who added: “Don’t leave yet; now it’s time for stargazing.”

“Not only will you find orientation movies, a museum, lectures, concerts,
programs, [and] exhibits inside, outside you can lunch overlooking a salt pond and cap it off with a walk to Coast Guard Beach, one of the many trails that can be found here,” Russo said.

Guests can check out the Nauset Marsh Trail, the Nauset Bike Trail, and the Buttonbush Trail from the center. The latter is designed for visitors with low or no vision and has guide ropes and signs in braille.

4. Check out a lighthouse

Eastham has many historic buildings and landmarks.

“Eastham is culturally rich,” according to Russo. “Eastham is proud of its National Register of Historic Places designations.”

Lighthouse lovers can visit the iconic red, white, and black lighthouse featured on Cape Cod Potato Chips bags: Nauset Light. The structure, built in 1877, was moved to Eastham from Chatham in 1923. Guests can check the lighthouse calendar for tour dates.

Visitors can also view the Three Sisters Lighthouses, named so because “from sea they looked like women in white dresses with black hats,” according to the National Park Service.

For food and beverage: 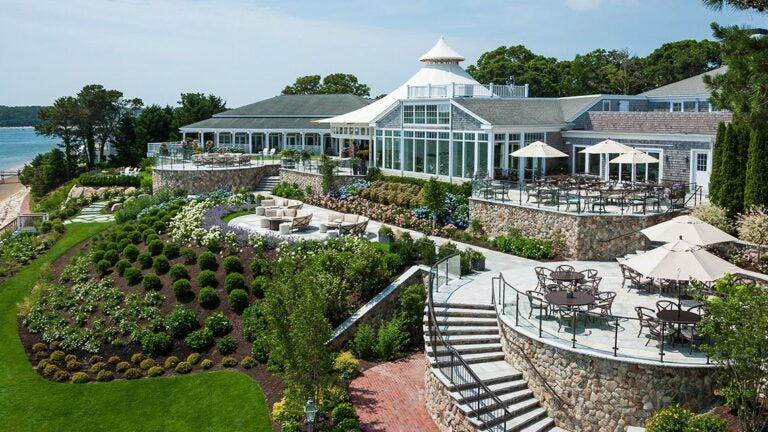 Mass. has one of the best romantic getaways for Valentine's Day, according to Architectural Digest