While Americans are rejoicing for the return of travel, flight attendants are going to work as accounts of physical and verbal assaults from enraged passengers multiply.

According to the Federal Aviation Administration, the agency has received more than 3,000 reports of unruly passenger behavior since Jan. 1. (To put that in perspective, the FAA received just 146 in 2019.) Thousands of those reports involved flare-ups over the federal mask mandate, but flight attendants say that issues go beyond coronavirus restrictions. Passengers — frequent fliers and novice travelers alike — are erupting over following basic rules, as well as the covid-era ones.

“It’s a lot of people not really understanding that it is our job to remind them to put on their seat belts and not to get up to use the restroom when we’re taxiing on the runway,” said Lori, a flight attendant for Southwest Airlines who spoke on the condition that only her first name be used so that she could speak candidly. “Those are common things on every single flight — people are just not following the rules, rules that could potentially impact their safety.”

Others said it may be because airports can bring out the worst in people.

“I don’t know what it is: People go to an airport and they start to lose that sense of control. They’re flying in a metal tube,” said Jamie Gibson, an Annapolis, Md.-based flight attendant for private jet companies. “That makes people act out in different ways, I think.”

The problem has become so severe that the Transportation Security Administration is relaunching a self-defense training course for flight attendants and pilots to handle “potential physical altercations.”

And this week, a coalition of airline industry groups asked the Justice Department for a criminal crackdown on unruly passengers.

Despite the FAA levying serious fines against disruptive passengers and airlines banning alcohol, among other efforts, bad behavior remains a threat for crew members. We spoke with flight attendants about how the current climate is affecting them, and what they’d like travelers to know as they return to the skies.

You may hate masks, but they’re still required on planes.

The era of empty airplanes and ghost town airports is behind us, but many coronavirus regulations are not.

“I know that the vaccine is here and countries are opening up, but we are still in a pandemic, and there’s still certain safety regulations that are in place,” JetBlue flight attendant Jalisa Robinson said.

Face masks, which have been a requirement on planes since the beginning of the pandemic, are at the center of many recent onboard altercations.

“They ask you throughout every booking process, ‘Are you going to be wearing your mask and agreeing to these rules?’ It’s a requirement,” said Ashlee Loree, who’s been a flight attendant with Delta for six years.

Although travelers may bemoan the requirement, flight attendants are more plagued by mask mandates than passengers. Not only do they have to wear masks throughout their whole work day, but they also have to enforce the rule.

“I wear mine for 12 hours a day. It’s really painful to have people yelling at me,” Lori said.

Flight attendants can be fined for not enforcing the rules.

On a flight earlier in June, Robinson said, she was physically assaulted by a passenger just before takeoff. She was giving the in-flight safety demonstration, the plane near ready to push back, when a passenger wanted to use the lavatory. Because that would go against FAA safety regulations, flight attendants told the passenger she’d have to wait until after takeoff.

“She didn’t like the way that another flight attendant said that information to her and she was instantly combative,” Robinson said. “Other people were trying to jump in, which kind of just made the situation worse, and we had to turn back to the gate and get her off of the plane, which she was not happy about.”

Robinson wants travelers to know that flight attendants can face penalties for not enforcing safety regulations.

Loree said FAA officials regularly take flights, often unannounced, to ensure crew are abiding by the laws. Should someone on board get hurt because a flight attendant didn’t enforce a rule, both the airline and flight attendant can be fined.

“It’s just better to err on the side of caution,” Loree said. “That’s why we’re hired as safety professionals — to do a job and do a good job and always work in the spirit of excellence.”

Sometimes it’s impossible for flight attendants to enforce those rules, and they’re forced to call for backup. Lori said it’s become more common for passengers to jostle to get off the plane first, and it’s causing fights she can’t suppress.

“I’ve had to call law enforcement twice for people getting into, like, physical altercations in the middle of the plane over that exact circumstance,” she said. “It’s so chaotic.”

Know there will be limited amenities on board.

While the airline industry continues its rebound, travelers will notice that amenities they once relied on may not be available at airports or on board their flight. For example, airports are still in the process of reopening their food options.

“Airports are experiencing the same thing that businesses are: They’re low staffed, so they’re not opening those places,” Lori said. “The lines for the food vendors are bigger than they ever were before, and so by the time people get on the plane, they’re already stressed out from the entire experience.”

To be prepared for those limited food and drink options, “bring snacks, bring water – anything to make travel more comfortable,” Loree said. She also recommended travelers pack a blanket and headphones that will work with the in-flight entertainment system.

Flight attendants, like travelers, are trying to get their endurance back.

Gibson hasn’t had the same kind of passenger aggression as her counterparts on commercial airlines. However, the travel surge has still been a shock to her system.

“I go to the airport as a passenger myself and the airports are crazy busy, like the busiest I’ve ever seen them,” she said. “I can’t imagine what it’s like for these commercial flight attendants who had two to five passengers on a plane, and now they’re at full capacity.”

Gibson said it’s been challenging to ramp back up to her pre-pandemic workload. Her enthusiasm is there, but it’s not as simple as going back to normal.

“As much time as we had to lose that endurance, we haven’t had the same amount of time to gain that endurance back,” Gibson said. “So we’re trying to catch up and play the way we used to.”

Flight attendants miss the joy of doing their job.

What Lori has missed the most about her pre-pandemic work life is being able to interact with passengers.

“I love playing with my passengers, teasing them,” she said. “I work for a company that really wants us to have a fun-loving attitude.”

Flight attendants say inconsiderate passengers are taking away the joy they get from the service element of their job.

“Some of the customers make it very hard to give that good customer service each and every time because they’re just acting out,” Robinson said. “They’re being very rude and very nasty to the flight attendants. And this is not just our airline. This is across the board that flight attendants are having issues with customers.”

After her physical altercation with the passenger in the lavatory, Robinson took two weeks off, to recover not physically but mentally.

“I needed to take some time away and regroup, make sure I’m in the right mental space to be able to give good customer service,” she says.

Despite everything, Robinson was happy to return to work. Connecting with passengers is also part of what Robinson loves about being a flight attendant.

“I love what I do, I really don’t want to do anything else,” she said. “But it is definitely a different ballgame right now. I’m hoping that people kind of mellow out.”

Apart from having the opportunity to travel the world, Loree said, her favorite part of her job is being able to meet new people. She likes to say she’s in the business of making connections — not just getting passengers to where they’re going.

That’s been more challenging this year with in-flight services still on hiatus.

“We’re not really doing a full service like we used to, which can be kind of sad because we’re not getting that interaction with passengers like we used to,” Loree said. 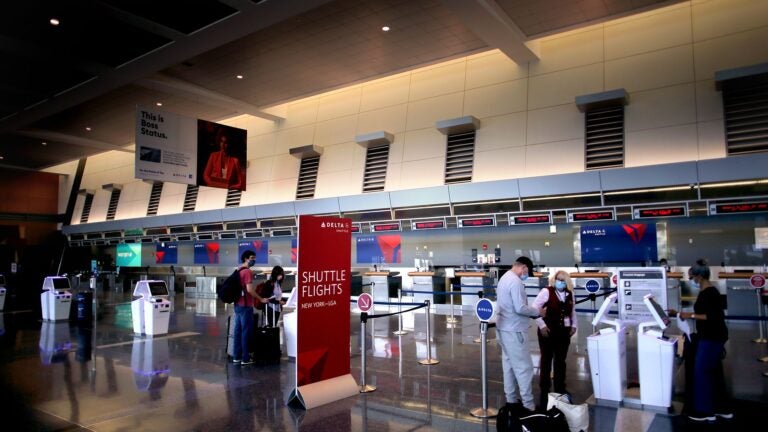 The U.S. is lifting travel restrictions for visitors. What do the new rules mean?