The exquisitely sensitive seismometer on NASA’s InSight lander dutifully recorded the burst of seismic vibrations and then dispatched the data, a gift of science, to Earth the next day.

The InSight scientists were busy celebrating the holidays. When they studied the tremor in detail in early January, it looked different from the more than 1,000 marsquakes that the stationary spacecraft had recorded during its mission to study the insides of the red planet.

“It was clearly a seismic event, and it was a big seismic event,” said Mark Panning, the project scientist for the InSight mission. “And we were excited about it right away.”

In scientific papers published Thursday, scientists using data from two NASA spacecraft reveal that the seismic event was not the cracking of rocks from the internal stresses of the red planet. Instead, it was shock waves emanating from a space rock hitting Mars. The discovery will help scientists better understand what is inside Mars and serves as a reminder that just like Earth, Mars gets whacked by meteors too.

Mars lacks plate tectonics, the sliding of pieces of the crust that shapes the surface of Earth. But marsquakes occur nonetheless, driven by other tectonic stresses such as the shrinking and cracking of the red planet’s crust as it cools. The largest marsquakes are modest by Earth standards.

The December shaking registered as among the most powerful that had been recorded, at a magnitude of 4. But it did not occur in the tectonically active region where most of the bigger quakes have been observed.

Most crucially, the Christmas Eve seismic event was the first time that surface waves — vibrations traveling along the outer crust of rocks at the surface of Mars — had been detected. For all of the other marsquakes, InSight’s seismometer had only observed what are known as body waves, vibrations traveling through the planet’s interior.

That the epicenter was not close — more than 2,000 miles from InSight — added to the mystery. That suggested a quake that was not only large but shallow.

“It was difficult to determine why we had surface waves,” said Philippe Lognonné, a professor at the University of Paris who serves as the principal investigator for the seismometer.

This remained a mystery until two months later when scientists on a different NASA spacecraft — the Mars Reconnaissance Orbiter — discovered that this seismic event was not a marsquake after all.

It was instead the thunk of a space rock hitting Mars.

It was not a tiny space rock either, estimated at somewhere between 15 and 40 feet in diameter, said Liliya Posiolova, the orbital science operations lead at Malin Space Science Systems in San Diego, which built and operates two of the Mars Reconnaissance Orbiter cameras.

The impact released the energy equivalent to somewhere between 2.5 and 10 kilotons of TNT, Posiolova said. (The atomic bomb dropped on Hiroshima at the end of World War II was the equivalent of 15 kilotons of TNT.) It left a crater wider than a football field.

During a NASA news conference on Thursday, Ingrid Daubar, a planetary scientist at Brown University who leads InSight’s impact science working group, said a meteor this big enters Earth’s atmosphere about once a year.

“We see those pretty regularly,” Daubar said. “But because Earth has a thicker atmosphere, asteroids of this size burn up and are generally pretty harmless.”

Scientists including Panning, Lognonné, Posiolova and Daubar reported the findings in two articles published on Thursday in the journal Science.

When InSight — a shortening of Interior Exploration using Seismic Investigations, Geodesy and Heat Transport — landed in November 2018, scientists expected to observe not only marsquakes but also a few meteor impacts a year. Instead, for more than three years, they saw no meteor strikes at all in the seismic data.

That indicated a shortcoming in their knowledge of the Martian crust and in the computer models simulating expected seismic signals.

Now, they also know of larger meteor strikes farther away.

In early February, Posiolova and other scientists were working to take a three-dimensional, stereo image of a part of Mars. They already had one image of the region from a few years ago, and now they were taking a second image from a slightly different angle.

But the second image included a big blotch, a blast zone of disturbed dust radiating outward more than 10 miles that had not been in the first image.

It was so big that it was visible in daily global weather images taken by another camera on the orbiter. “Then we pretty much start marching back from that February image,” said Posiolova, the lead author of one of the Science papers.

She said she remembered in the back of her mind that InSight had recorded one of its bigger seismic events on Christmas Eve. “It was like, ‘Could this be it?’” she said.

Higher-resolution images showed that the meteor carved a crater about 500 feet wide at the center of the blast zone and even kicked up water ice from below the surface. That is the closest to the Martian equator that ice has ever been spotted.

Now that they had definitively identified the seismic signals from a meteor impact, the InSight scientists went back through their data to see if any earlier marsquakes were actually meteor impacts.

Indeed, the shaking of a magnitude-4.2 seismic event three months earlier, on Sept. 18, looked similar. So the orbiter’s cameras looked around that epicenter, located about 4,600 miles from InSight, and spotted a crater there about 426 feet in diameter.

Posiolova said these were, by far, the two largest new craters that the orbiter has spotted during its 16 years studying Mars. The two impacts are unlikely to be related, Panning said; that they occurred only a few months apart was lucky, random chance.

Connecting the seismic signals with freshly carved craters offers a sharper view of the planet’s internal structure. Lognonné likened it to a movie. The Mars Reconnaissance Orbiter provided the images while InSight recordings are the soundtrack.

“You are able to better understand the movie than with just the sound or just the picture,” he said.

Lognonné said the current models work well for the crust of Mars, but not as well for the deep mantle. “This is unique data to get more information on the interior of Mars,” he said.

One of the possible surprises is that the surface waves appear to be traveling at roughly the same speed through the crust of the northern hemisphere as the southern hemisphere.

The topography of the northern half of Mars — what may have once been covered by an ocean — is much lower than the southern highlands. But the velocity data suggests the crustal rocks in both hemispheres are of similar density. On Earth, the crust beneath of the oceans is denser than the crust of the continents.

“We are beginning to sort of uncover the mystery of this dichotomy,” said Doyeon Kim, a planetary scientist at the Swiss Federal Institute of Technology in Zurich and the lead author of the Science paper describing the InSight findings.

The Science papers are the latest findings from a busy year for the InSight mission even as the spacecraft is dying because of dust piling up on its solar panels, cutting off its energy supply.

During the NASA news conference, Bruce Banerdt, the InSight mission’s principal investigator, said that the expectation was that the spacecraft would fall silent in the next four to eight weeks. “That’s a sad thing to contemplate,” he said.

A regional dust storm in the southern hemisphere did not directly pass over InSight, but it did kick up more dust into the atmosphere that eventually settled on the solar panels, further reducing the power output, Banerdt said.

“We had cut off the seismometer for a few weeks,” he said. “We’re now operating the seismometer again, only one day out of four at this point to conserve our power. But even at that relatively small amount of use, the batteries are still slowly being depleted.”

In another paper published in the journal Nature Astronomy on Thursday, scientists used InSight’s seismic data to study Cerberus Fossae, a highly fractured, 750-mile-long region where most of the seismic rumblings of Mars originate.

Heat from magma from a volcanic region to the west is heating the crust there, said Simon C. Stähler, a seismologist also at the Swiss Federal Institute of Technology and lead author of the Nature Astronomy paper.

“You are basically causing this weakening, this local weakening, which allows quakes to happen,” he said.

The InSight scientists are also studying a magnitude-4.7 marsquake in May, the largest detected during the mission. That one appears to be an actual marsquake, because no crater has been seen near the epicenter, which lies close to Cerberus Fossae.

Once InSight shuts down, there again will not be any seismometers operating elsewhere in the solar system. But a spare seismometer built for InSight is being modified to be sent to the far side of the moon in a few years, and NASA’s Dragonfly mission to Titan, the largest moon of Saturn, will also carry a seismometer. 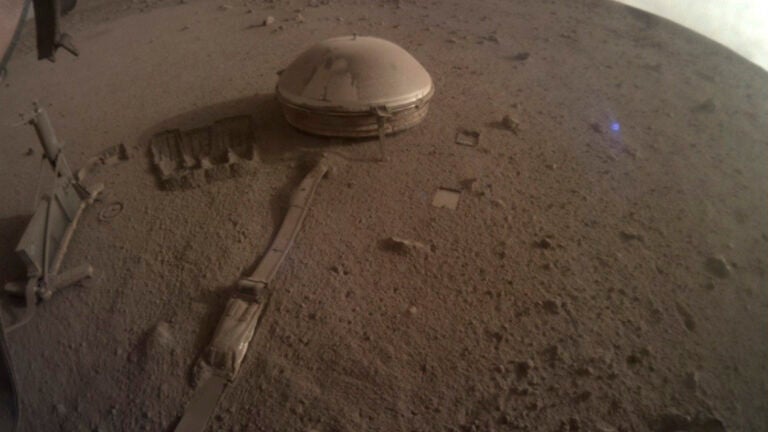