Hail that was 1.5 inches in diameter was reported by Montague and Shutesbury residents in Franklin County and .88-inch-diameter hail was seen by a weather spotter in Westfield, where large branches were down, according to preliminary local storm reports on the National Weather Service’s website.

Wind gusts reached 70 miles per hour and knocked down trees in many towns including Longmeadow, West Springfield, and Wayland, according to the weather service in Taunton.

The storms, which stretched from Maine to Pennsylvania, began marching across the state just after 3 p.m., moving in a southeast direction at 35 miles per hour, said William Babcock, a meteorologist at the weather service.

“Once the morning showers moved off, the sun broke through and heated up that warm humid air,’’ Babcock said. “That added a lot of energy to the atmosphere.’’

The cold front sparking the storms also brought an end to the stretch of hot and humid weather. After a high of 92 in Boston today, temperatures will drop back to the 70s for the weekend with much more manageable humidity, Babcock said.

In Springfield today, a man on Parker Street was trapped after trees and wires fell on his car, Springfield police Lieutenant Kevin R. Wood said. Power to the wires was cut, and police were able get the uninjured man out safely.

Wood said damage was spotted “from the north side to the south side’’ of the city, with Island Pond Road, one of the hardest hit areas by last week’s devastating tornado, reporting some of the worst damage. Additionally, a large tree on Quincy Street fell on two houses, according to the weather service. No injuries as a result of the storm were reported, Wood said.

Elsewhere, trees down on Route 97 in Topsfield made the road impassable, the weather service said, and a large tree was down on train tracks by Tucks Point Road in Manchester.

Reports from the public of tornado sightings were relayed to the National Weather Service, but no evidence of tornadoes was seen on radar or by trained spotters, Babcock said.

“They could have seen something that looked like a funnel,’’ Babcock said. “There are many things in mother nature that look like a tornado that are not.’’

Thousands of riders on all lines of the Commuter Rail were delayed between 10 minutes and one hour-plus, Commuter Rail spokesman Scott Farmelant said. Trees were reported down on four different lines and lightning strikes caused signal and switch issues, he said.

The severe weather also brought an early end to the Scooper Bowl, a three-day ice cream event on the Boston City Hall Plaza that raises money for the Jimmy Fund. 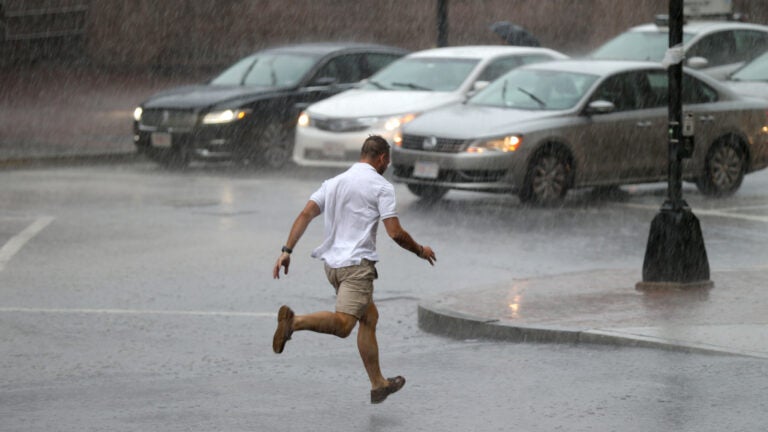 What to know about the thunderstorms in the forecast for Mass.