After months of fighting and inactivity on the Filene’s site in downtown Boston, the city’s top development official signaled a willingness to work with its New York owner to devise a new plan to re-start construction on the blighted property.

Boston Redevelopment Authority Director Peter Meade said Vornado Realty Trust is “likely to be part of the solution’’ at the Downtown Crossing site where it halted work three years ago and left a massive crater in the heart of the city. 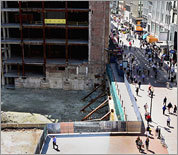 His comments marked a shift in the city’s rhetoric about the investment firm after months of rocky relations during which the BRA revoked permits for its $700 million project that would have included offices, stores, residences and a hotel. Vornado then put the site up for sale in late 2010 but has yet to attract an acceptable bid.

Meade made clear that a sale now seems unlikely since Vornado would have to unload the property at a loss, and he said he has talked with the firm’s executives regularly in recent weeks about other ways to move forward. “I’m going to continue speaking with them,’’ he said, adding later: “I’m pleased with the tone of the discussions.’’

Following its usual practice, Vornado today declined to respond to Meade’s comments or discuss its intentions for the Filene’s property, which sits at the corner of Washington and Franklin streets, in the center of an historic but sleepy shopping area the city is trying to revitalize.

Vornado, the lead investor in a partnership that owns the site, stopped work in the summer of 2008 on a 39-story tower that was to serve as a catalyst for that revitalization, instead allowing it to become a blighted mess that has served as a drag on surrounding projects.

Several local and national developers expressed interest when Vornado put the property on the market, but the firm only received bids around $50 million, a sum that would force it to accept heavy losses on the $200 million invested in the site so far.

Read our full community guidelines.
Close
Wake up with today’s top stories
Get Today’s Headlines every morning and breaking news as it unfolds, right to your inbox.
- or -
Thanks for signing up!
Privacy Policy