Word of Moammar Khadafy’s death today sent waves of joy and jubilation through several households in New England, but many also expressed regret that the dictator would never face trial for accusations of crimes against humanity.

In Braintree, Adela Misherghi, leaped out of bed at dawn when a friend in Connecticut called her breathless with the news that Khadafy had been killed in his hometown of Surt. For months, she had monitored the tense situation as her family in Tripoli suffered the leader’s brutal response to the nation’s uprising, with food shortages, long gas lines, and violence.

“The first time in my life I feel what freedom is,’’ she said. “We got the freedom in our hands. Freedom by ourselves.

Today, she waved the Libyan flag as she ferried her children to school, wishing she could be with her family back home celebrating and giving away cakes, candy, and chocolates to neighbors, especially children. In cellphone calls back home, she laughed and said “mabrouk,’’ the word in Arabic for congratulations.

In Shrewsbury, feelings were mixed at Jeannine Boulanger’s house, as she responded to an steady stream of television cameras and phone calls. Her 21-year-old daughter Nicole, a college student returning home from studying in London, was one of 270 people, including 189 Americans, killed when Pan American Airways Flight 103 exploded over Lockerbie, Scotland, in 1988.

Khadafy later accepted responsibility for the attack, which was apparently in response to President Reagan’s 1986 attack on Khadafy’s compound in Tripoli, which killed about 100 Libyans, including Khadafy’s baby daughter.

Khadafy paid about $2.7 billion to compensate the families of Lockerbie victims. But Boulanger said it is widely believed that he did not act alone, and she said his death would make it all the more difficult to root out the others who had helped him.

“I would much rather have had Khadafy taken alive where he could have been tried in the world court for crimes against humanity,’’ she said, in a telephone interview, her voice composed and straightforward. “Justice was just too swift today, as far as I was concerned.’’

Stand with Libya, a Boston group that advocates for democratic change in Libya, is planning a celebration at 6 p.m. today in Copley Square. 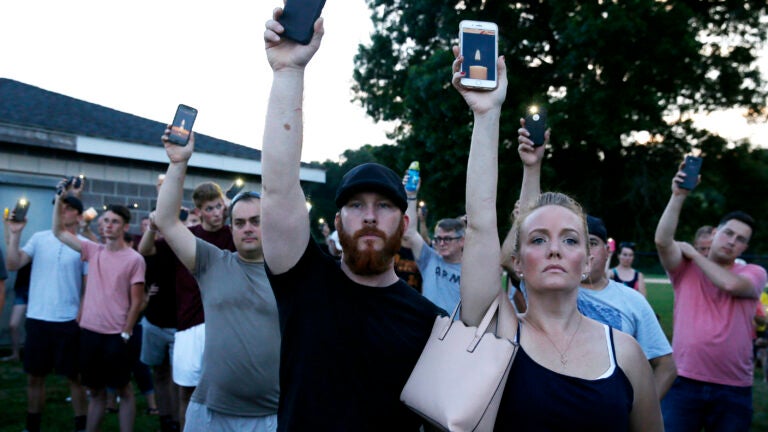