The Rev. Martin Luther King Jr.’s spiritual journey passed through Boston, where he studied for a doctorate in theology at Boston University, and speakers recalled that part of his life today at the annual breakfast celebrating the legacy of the slain civil rights leader.

“I am proud that Dr. King’s personal history is rooted in our city,’’ Boston Mayor Thomas M. Menino said at the Boston Convention & Exhibition Center in South Boston, where organizers estimated that about 800 people filled the ballroom for a morning of song, prayer, and praise.

King’s embrace of faith and action, and his pursuit of economic and social justice for all, offers a continuing challenge to people today, Governor Deval Patrick told the crowd as he stood at the front of the room, where he and other speakers were flanked by screens with images of King and a new memorial in Washington, D.C., that honors the civil rights leader.

“There are countless, countless ways to serve, especially for people of faith,’’ Patrick said. “Faith is about more than what we say and believe. Faith is about what we do, how we act, whom we touch.’’

Find an opportunity to serve, Patrick said, whether by helping a neighbor, organizing a neighborhood park cleanup, or writing to those serving abroad in the military.

He saluted hundreds of Bay State eighth-graders who took part this year in Project 351, a statewide day of community service that Patrick initiated last year. The project takes place on Martin Luther King Jr. Day and draws students from all 351 cities and towns in the Commonwealth.

The example set by the eighth-graders, Patrick said, will lead to that vision “of a beloved community.’’

Everyone “has what it takes to serve,’’ he said, adding that as King once said, “all you need is a heart full of grace and a soul motivated by love.’’

King’s devotion to service is a “powerful message’’ that could be an inspiration to those trying to end the bitter partisan divide in Washington, said US Senator Scott Brown.

“He had the ability to bring people of all walks of life together’’ for the common good, Brown added.

Walter Fluker, the Martin Luther King Jr. professor of ethical leadership at the Boston University School of Theology, was today’s keynote speaker. He called on the audience to find inspiration in the memorial to King that was dedicated last fall on the National Mall in Washington.

Inscribed on the sculpture of King is the phrase, “Out of the mountain of despair, a stone of hope,’’ words he spoke in 1963 in his “I Have a Dream’’ speech.

Fluker traveled to Washington for the memorial’s dedication, and noted that because it is between the Lincoln Memorial, where King delivered his “I Have a Dream’’ speech, and the memorial to Thomas Jefferson across the tidal basin, “it’s as if King’s gaze stretches across the basin and it’s fixed on Jefferson. Maybe he’s thinking about the promise of equality and freedom that is written into the Constitution and the Declaration of Independence.’’

In the audience was Robert Cooper of Cambridge, who brought his 6-year-old son, Robert Jr., to the breakfast for the first time.

“It’s important for kids at a very young age to celebrate Dr. King’s life and his vision,’’ said Cooper, a senior vice president and general counsel at OneUnited Bank, a minority-owned bank based in Boston.

Dressed in blue suits and ties, father and son talked about the lessons young Robert learned about King in first grade this year at Fayerweather Street School in Cambridge.

“He taught people to use your words, not your fists,’’ Robert Jr. said. “He stood for justice and equality.’’ 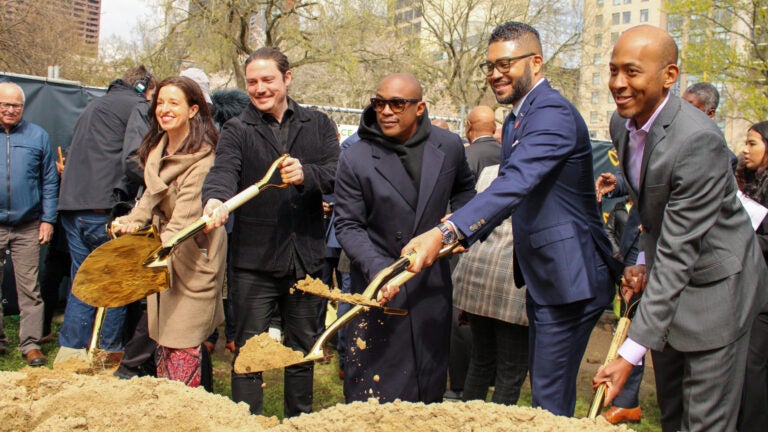