Two days after he was accused of raping a fellow student, a standout Boston University hockey player is no longer enrolled at the university.

Max Nicastro, 21, a junior from Thousand Oaks, Calif., was released on $10,000 cash bail yesterday, several hours after pleading not guilty to two counts of rape on the Riverside campus. Hours after the court proceeding, a school spokesman confirmed that Nicastro was no longer enrolled, but would not say if he withdrew or was expelled.

Nicastro held a legal pad in front of his face at his arraignment in Brighton Municipal Court to conceal his face from cameras inside the courtroom.

His mother was present for the arraignment, flying in from the West Coast, but she declined to comment outside the courtroom after the arraignment and several hours later when her son was released on bail.

Hugh Curran, Nicastro’s lawyer, said during the arraignment, “We believe that when all the facts are out there, this will be found to not be a criminal act.’’

Suffolk prosecutors did not disclose any information about the allegations in court yesterday where Boston Municipal Court Judge Franco Gobourne ordered all reports in the case impounded, citing confidentiality.

The incident is alleged to have occurred early Sunday, just hours after Nicastro scored a goal in BU’s loss to UMass-Lowell Saturday at Agannis Arena. He was taken into police custody at 6:30 a.m.

According to Gloriann Moroney, the assistant district attorney handling the case, an individual called police to report a rape on campus.

“The victim was upset and tearful and said shortly prior that she had been raped by Max Nicastro,’’ Moroney said. The woman was taken to an area hospital.

Based on interviews, police went to Nicastro’s dorm room and arrested him. Moroney said it appears that Nicastro does not have a criminal record.

Nicastro, a star defenseman and third-round pick of the Detroit Red Wings in 2008, is the second BU player in the last 10 weeks to face sexual assault charges.

The team’s leading scorer, Corey Trivino, was arrested Dec. 11 on numerous charges after he allegedly broke into a woman’s room at night.

Trivino, who pleaded not guilty to the charges, was thrown off the hockey team. Nicastro had been suspended from the team as school officials investigated the incident. But Colin Riley, a BU spokesman, confirmed yesterday that Dicastro is no longer a student at BU.

Nicastro was ordered by Judge Franco Cobourne to stay away from his accuser. It was unclear whether she and the defendant had lived in the same dorm building.

Nicastro was ordered to return to court March 26 for a probable cause hearing. Calls to BU athletic director Mike Lynch were not returned. 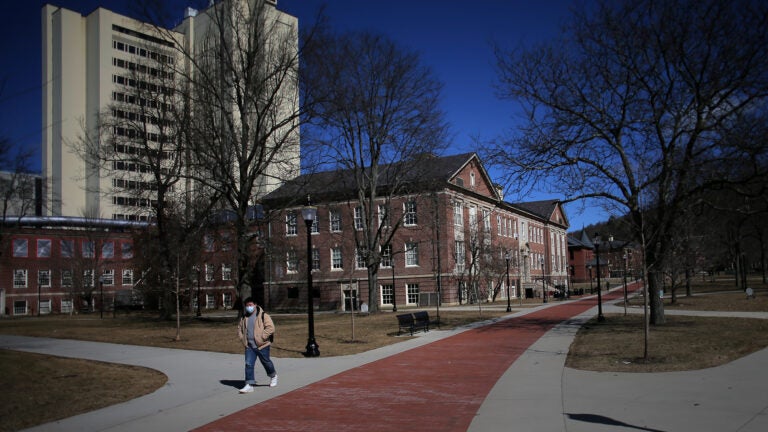