Local comedian Jimmy Tingle has a flair for Boston humor. His act is sprinkled with references to Massachusetts people and events.

During an interview with the Globe, he offered to write a few jokes – and provide some advice – that could be used at the St. Patrick’s Day political roast this Sunday in South Boston.

ABOUT US Senator Scott Brown, who likes to tout his barncoat and pickup truck as proof of his “everyman’’ image:

“Scott Brown is constantly being referred to as a humble ‘truck driver.’

“How does a lawyer, six-term state legislator, and US senator driving a pickup truck become a ‘truck driver’?

“Ted Kennedy loved to sail, but that didn’t make him a ‘fisherman.’’’

“The last time around, Scott ran a great campaign.

ABOUT Mitt Romney, the Republican presidential candidate who has made a series of wealth-related gaffes and famously once tied the family dog, Seamus, to the roof of his station wagon for a vacation drive:

“Scott’s strategy seems to be catching on with other candidates.

“Which is tough, because there’s a dog on the roof – and my wife’s trying to follow behind me in a couple of Cadillacs.

“Thank God Barack Obama bailed out Detroit, or we’d be down to one Cadillac – and no truck.’’’

FOR Elizabeth Warren, whom Brown has branded as an elitist because of her work as a Harvard professor, and who is attempting to be the first woman from Massachusetts elected to the US Senate, Tingle had this advice:

“As a woman, Elizabeth Warren will have to overcome the negative stereotype that women may break down crying if they get too emotional.

“She could say, ‘Hey, I’m running for the US Senate as a Democrat from Massachusetts, not Republican speaker of the House like that guy from Ohio.’’’

AS for being elitist, Tingle suggested Warren take on the label directly:

“Being from Oklahoma, teaching at Harvard, living in Cambridge, and now speaking at a St. Patrick’s Day breakfast in South Boston, I will always defend the rights of immigrants.

“The Statue of Liberty speaks to me as it does to millions of Americans: ‘Give us your tired, your poor, your hungry, your bankruptcy law professors, yearning to breathe free.’’’

TINGLE also said topical references have good comedic value, and Warren could say something like this:

“The recent debate about contraception featured six men testifying before Congress about why contraception shouldn’t be covered in the new healthcare law.

“What are these guys going to testify about next? Mammograms?’’ 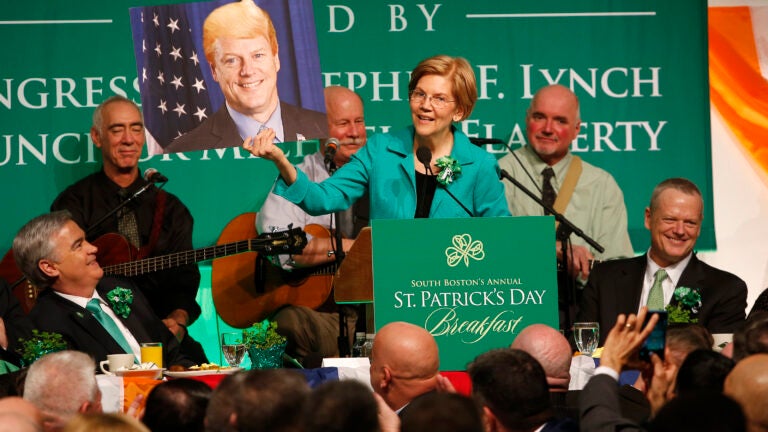