A woman in her 20s was stabbed in the chest this morning by a man inside the Ashmont Red Line station lobby today, an attack that took place just moments after the woman arrived at the station on a Brockton Area Transit bus, Transit Police said.

The sudden act of violence inside one of the T’s busiest subway stations — some 15,000 people use it on a daily basis — was being investigated by Transit Police who are now examining surveillance camera videos in hope of gleaning details of the attack.

“It’s highly unusual for us to have an act like this at this station,’’ said Transit Police Superintendent-in-chief Joseph O’Connor.

The woman was about four or five feet inside the south entrance of the Red Line station when the man stabbed her in the upper right shoulder and chest area, officials said. O’Connor said it was not yet known if the man approached the victim from behind or attacked her as he walked toward her.

Blood stains were visible inside the lobby of the Red Line station near the ticket kiosk, which was manned at the time, and another 3o to 40 feet away in the pavement outside the station.

The woman was rushed by Boston Emergency Medical Services paramedics to Boston Medical Center for treatment. The woman was conscious after the attack, and her wounds were not considered life-threatening, police said. She had been stabbed with a knife, police said.

MBTA spokesman Joseph Pesaturo said the incident is under investigation. 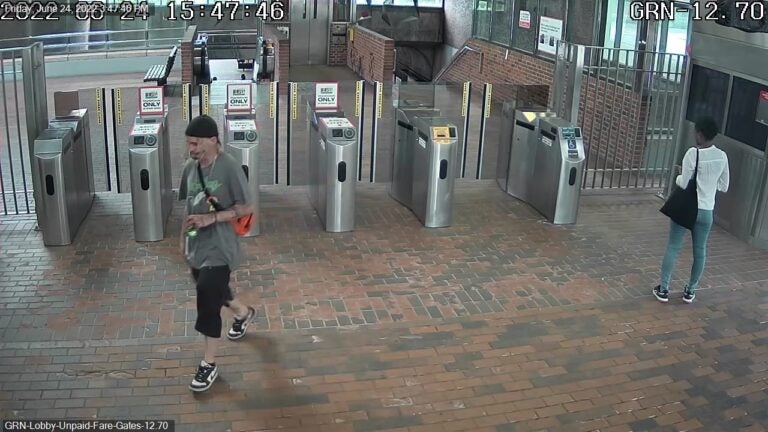