[fragment number=0]LONDON — Andy Murray is looking ahead, hoping on Friday to become the first British male to reach a Wimbledon final in 74 years, but he couldn’t help but look to the distant West this week for some inspiration.

Make that southwest, to Miami, where a certain something LeBron James accomplished last month at the left side of the Atlantic caught Murray’s eye.

“His winning this year, for him, I’m sure was massive,’’ said Murray, noting how James finally captured his first NBA title with the Heat’s win over the Oklahoma City Thunder. “For me as a basketball fan it was nice to see . . . I’ve been close a lot of times and not quite made it.’’

Murray, 25, on Wednesday advanced to semifinals for a fourth straight year and is favored to beat the affable, hard-hitting Jo-Wilfried Tsonga
Friday afternoon. In 2009, the 6-foot-3-inch Murray was bounced by Andy Roddick. In 2010 and ’11, he was dismissed by Rafael Nadal.

A win now by Murray, born in Scotland, would make him the first Brit since Bunny Austin in 1938 to play in the final, and a win on Sunday would bring the All England Club its first home-grown winner since Fred Perry in ’36. Decades have come and gone. (Tim) Henman’s Hill turned into a mountain of disappointment. Now a tennis-loving, though still football-mad, country turns its lonely eyes to a Scot who runs down loose balls in
Dave Cowens-like, wrecking-ball fashion.

“Subconsciously,’’ mused “Muzza,’’ as he is known here, “I’m probably extremely stressed out right now, but I try not to feel it.’’

Easier said than done, of course, in a tournament that is nearly treated as a two-week holiday break in Great Britain. Murray is the man, his rises and falls documented by England’s voracious media, who summon the likes of Austin and Perry the way Red Sox fans long thought of 1918.

No choice, said Murray, but to get into his “own little bubble’’ as a means of sheltering the media storm.

“I think if you think too much about it,’’ he said, “and read the newspapers and watch the stuff on TV that’s said about it, I feel it would become far too much.’’

Murray, who seems more at ease since recently taking on Ivan Lendl as his coach, will face a worthy, somewhat similar opponent in Tsonga, the 6-2 Frenchman. Tsonga can’t retrieve balls with Murray’s darting speed and fluidity, but he moves very well for a big man and, like Murray, hammers his serves.

While Roger Federer and Novak Djokovic are likely to play a controlled, contemplative chess match in the other men’s semi, Murray and Tsonga are more likely to dash and blast their way around the All England Club.

“Sometimes,’’ added Murray, reflecting once more on the story line he feels he may share with King James (American version), “it takes a guy a bit longer than others. I’ve been close a lot of times and not quite made it. I have to keep putting myself in the position and hopefully it will click.’’

Blasts from the past

Austin also lost in the 1932 final. Henry Wilfred Austin grew up in London and, among other accomplishments, became the first player ever to wear shorts in Wimbledon matches.

Prior to the Serena Williams–Victoria Azarenka matchup, Angieszka Radwanska put away good friend Angelique Kerber in straight sets, 6-3, 6-4, making her the first Polish player in 75 years to reach a Grand Slam final.

Poland’s Jadwiga Jedrzejowska
made it to the Wimbledon final in 1937, none of which seemed to resonate with the Krakow-born Radwanska.

“Well, I know that she was the finalist here many years ago,’’ said Radwanska, likely unaware that Jedrzejowska died in 1980. “I don’t think I can remember the year for sure. I’m just very happy that I can be the second one here in Wimbledon, being in the final.’’

Federer and Djokovic have met 26 times, but never on grass. Federer has a slight edge overall, 14-12, but has fallen to the steady Serb in seven of the last eight . . . Federer has been dealing with a back injury for much of his stay here, but reported few issues with it after Wednesday’s breeze over Russian Mikhail Youzhny . . . Hard for anyone to know with great accuracy what any of the injuries mean. Headed into Thursday’s action, rumor around SW19 was that Serena Williams was having trouble with an ankle injury, but she was at her mobile best vs. Azarenka, delivering the record 24 aces. 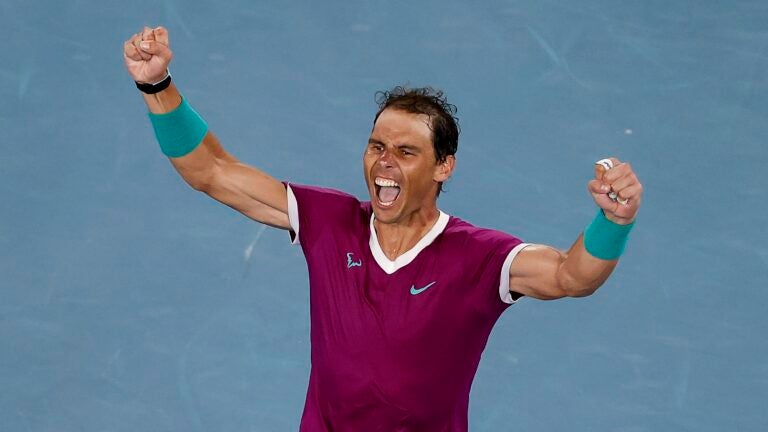