Elyse Wolf woke up Wednesday at the crack of dawn to her parents’ laughter.

In the wee hours of the morning, a black bear had sneaked into the Wolfs’ yard, ripped down their bird feeder, and guzzled its contents. And it was all caught on film.

“My parents were ecstatic,’’ she said.

After a bear destroyed their bird feeder in November, Elyse had given her father a motion sensor-activated camera as a joke for Christmas.

She said, “He set it up Christmas Day,’’ but that until now he had only caught footage of birds, deer, and squirrels.

She said her father first went to check the camera on Wednesday after he noticed the feeder on the ground at their Tyngsborough home.

When Wolf heard all the commotion, she rushed downstairs to watch the video and exclaimed how cute the bear was. She said the bear had its fill of birdseed in about two minutes and then went on its way.

She said her family moved into their Alpine Way home in 2003, but it’s only in the last year or two that she has noticed “possible bear issues.’’

“Honestly, we are in his territory,’’ Wolf said. “Even if we got rid of the feeder, the bear would still be there.’’

The Wolf family has four cats, two of which go outside, but she said she isn’t too worried that one of them will meet the bear.

“The two that go out right now just basically sit on the porch and nap,’’ Wolf said.

She is worried about the rest of her neighborhood, and said there are lots of small children and family pets.

She estimates the bear was about six feet tall on its hind legs, and thinks it may be the same bear that ripped down the bird feeder in November.

“I know last year he came back every three to six weeks so he’ll probably be back,’’ Wolf said. “It might be cool, but I kind of hope that he goes back to more wild land.’’ 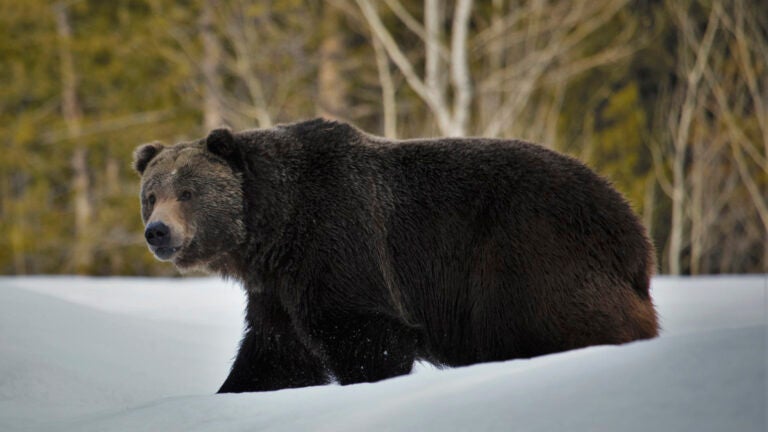