Eating at a place called Happy’s feels like being tickled against your will or told to smile when you’re not in the mood. This is particularly true when the decor is relentlessly kooky. Happy’s Bar + Kitchen is a restaurant as imagined by the set designers of “Pee-wee’s Playhouse,’’ with mismatched chairs and lighting, bright retro murals, wood tables painted with words like “CHEERS’’ and “PEACE,’’ and portraits of Don Corleone, a gorilla, and Bart Simpson side by side on the wall. A crooked neon arrow sign outside reads “Home Cookin’.’’

Cheer can’t be forced. Nor can greatness. The menu at this new Fenway venture from chef Michael Schlow (Alta Strada, Radius, Tico, Via Matta) debuted with dishes such as “The Greatest Wedge . . . Ever’’ (a fairly standard lettuce-and-blue cheese construction), “The Famous ‘Kitchen Sink’ Chopped Salad’’ (already famous the day the restaurant opened), and “Pikes Peak ‘The Ultimate Ice Cream Experience’ ’’ (Friendly’s does sundaes better). The menu was recently reworked, and it is now somewhat humbler — smaller in scope and less heavy on superlatives.

This move was wise, because the food at Happy’s is all over the place, both in concept and execution. One minute you’re in a deli, eating “Grandma’s ‘Extra Special’ Matzoh Ball Soup.’’ Unfortunately, it seems Grandma forgot to teach the cooks how to make the matzoh balls; they are raw inside. The next course might find you in an upscale bistro, with a bowl of Portuguese fisherman’s stew, ruined by a tomato base that tastes like spaghetti sauce.

Then you are transported to a spot on the shag rug in front of a static-plagued set while your dad messes with the rabbit ears. The “Never Been Frozen TV Dinner ‘du jour’ ’’ captures the mood Happy’s seems designed to evoke. It comes on a white ceramic tray with partitions for the main course, vegetable, starch, and dessert — like the real thing, only cuter. One night it offers turkey meatloaf, bland and tough, with nicely cooked green beans, fluffy and buttery mashed potatoes, and a nondescript cake featuring tropical fruit for dessert. It’s a clever presentation that doesn’t taste as good as it looks.

Happy’s most ballyhooed dish is an enormous meatball — 1 pound, to be precise — served with pasta and garlic bread. The meatball’s claim to fame also turns out to be its downfall. The thing is so big, there’s not enough sauce to keep each bite interesting. Once the outside is gone, you’re left with too much plain, dry meat.

Where the kitchen seems to do best is with dishes influenced by a Mexican flavor profile — no surprise, given executive chef Joshua Smith’s prior gig at Schlow restaurant Tico. Tortillas are topped with duck, cucumber, cilantro, mint, and chilies, spicy and cooling. (On the new menu, the duck is replaced by shrimp.) DIY nachos are a simple but satisfying idea — a serving of good, salty chips with a tray of condiments such as salsa, guacamole, and runny yellow queso to apply as you like. And a wonderful dish of smoky grilled cauliflower in creamy chipotle sauce with fragments of fried fava beans for crunch echoes the way cauliflower is served at Tico. Sandwiches such as the WOWburger! (with cheddar, crisped onions, and horseradish-black pepper sauce) are also a success.

One thing indisputably happy-making about Happy’s is the staff, a group of enthusiastic, funny, pleasant people who do their utmost to make your night enjoyable.

To their credit, Schlow and company seem to recognize things aren’t quite right. They installed Smith in May, a few weeks after the restaurant first opened. He’s working on consistency and fine-tuning the menu, according to Happy’s PR team. But more work is still needed.

A meal might conclude with a spiked milkshake or the Pikes Peak, an unwieldy vat of ice cream trapped beneath toppings. There is a simple coconut cream pie, and “mascarporeos,’’ a grownup riff on America’s favorite sandwich cookie. Yet none of these quite manages to reproduce for adults the pure joy of a childhood dessert.

Until a server brings the check, which comes with a pocket’s worth of penny candy: Smarties, Atomic Fireballs, root beer barrels. The table turns into a schoolyard mob, people calling dibs, initiating trades. This is the mood the restaurant has been trying to conjure all night. It’s too bad that true happiness doesn’t arrive until the very end. 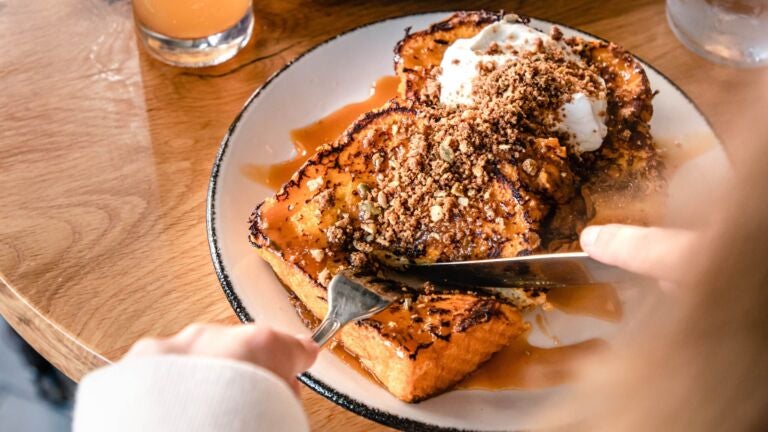