Comedy greats Will Ferrell and Zach Galifianakis hyped their new political comedy, “The Campaign,’’ on Monday by getting on a Boston Duck Tours boat and riding it from the Museum of Science to the Back Bay. Inspired by the movie — which features the actors as dueling congressional candidates — the two rode in the back of the boat down Beacon Street, past multimillion-dollar homes, with Ferrell shouting into a megaphone, “Hello, rich people!’’ and Galifianakis yelling, “Hello, 1 percenters! Nobody likes you!’’ To JAM’N 94.5 radio personality Ramiro Torres’s dismay, the boat did not go in the water. But he did get to emcee the tour, with “ConDucktor’’ Chris Maccagnano’s help, as the boat passed the State House, Boston Common, and Cheers, a.k.a the Bull and Finch Pub. New Bedford brothers Phil Morris, 25, and Ryan Shea, 30, went along for the ride after winning a 94.5 contest. The two took the day off from their construction jobs to meet the celebrities. Shea said his brother picked him as his guest because he owed him “a lot of favors.’’ “It’s only right to take your brother,’’ he quipped. Driver Maccagnano, 32, of Milford, who normally wears a duck tie and black duck jacket on the job, donned a special “Cam Brady 2012’’ T-shirt for the ride — in support of Ferrell’s character in the movie. He found out just an hour before the tour that he would be driving the comedians around town. “It was a good surprise,’’ he said, adding that Porsche Briggs from “Big Brother’’ has been his only other celebrity rider. (Yeah, we hadn’t heard of Briggs either.) Maccagnano admitted he was relieved to have Ramiro emcee the tour so that he didn’t have to compete with Will and Zach’s humor. But he was disappointed by the lack of quacks. “That would have been a lot of fun if we could have gotten Will and Zach quacking,’’ he said. “They seemed a bit subdued.’’ The condensed tour ended across from the Taj, where the actors were scheduled to meet with more press and then head out for a visit to the USS Constitution. Like a good candidate, Ferrell told the Globe he wished it could have been three hours instead of 30 minutes. “It was a beautiful day and a nice way to see the city,’’ he said. 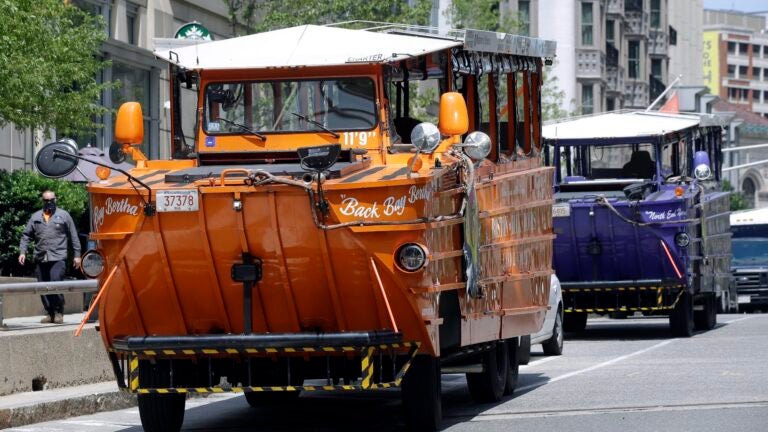 ‘We will live to quack another day’: Boston Duck Tours plans to stay afloat in rough waters