Three men were arraigned Tuesday after Somerville police recovered eight handguns, six of which were fully loaded from them, during a traffic stop on Medford Street during the Labor Day weekend, Somerville police said.

At about 4 p.m. Sunday, Somerville Police Officer Robert Hickey pulled over a 2004 BMW for speeding on Medford Street near the intersection with Thurston Street, police said in a statement Tuesday.

The driver, identified as Sherwood Gustave, 37, of Mattapan, was arrested for operating after his license was suspended, police said. He was also charged with speeding, four counts of carrying a firearm without a license and posession of a large capacity gun, six counts of carrying a loaded firearm without a license, possession of ammunition without a firearms identification card, as well as receiving stolen property over $250, the Middlesex District Attorney said.

Officers spotted an empty gun holster in the rear seat of the vehicle triggering a more in-depth search of the car, police said. Officers then found the eight pistols, six of which were loaded, and two that were found to have been stolen, police said.

Two passengers in car at the time were also arrested, police said. They were identified as Anthony Paulino, 18, of Somerville, and Gunter Vital, 47, of Cambridge. Both men were each charged with five counts of carrying a firearm without a license, two counts of possession of a large capacity firearm, six counts of carrying a loaded firearm without a license, possession of ammunition without a firearms identification card, and receiving stolen property over $250.

All three suspects pleaded not guilty at their arraignment. Somerville District Court ordered Vital to be held on $25,000 cash bail, Gustave on $10,000 cash bail, and Paulino on $500 cash bail, the Middlesex District Attorney said.

In the statement, Somerville Police Chief Thomas Pasquarello applauded the work of his officers.

“Getting eight guns off our streets makes our community a little safer,’’ the chief said.

The defendants’ next court date is Oct. 3.

The case is still under investigation. 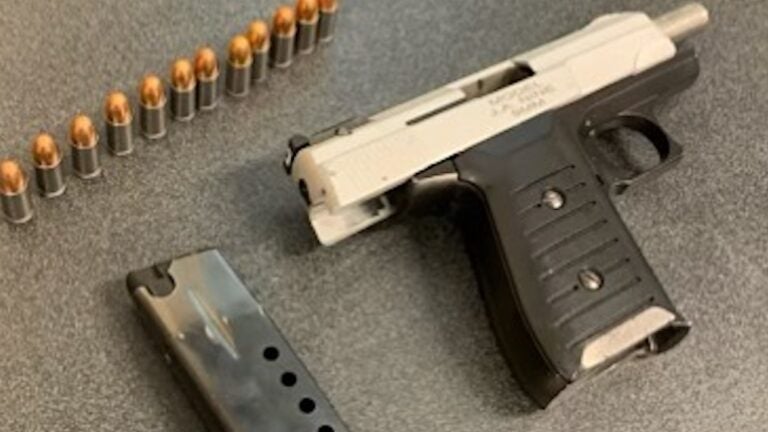