SOMERVILLE — With eyes wide and feet fidgeting, 14 eager children gathered around Jay Holmes, the man with the silky baritone and oil-smudged work clothes, to hear a tale about a guy he knew as Barry.

Perched on the stoop of his ivy-covered brick apartment building at 365 Broadway, the students encircled the landlord and peppered him with questions:

Letting out a deep laugh, Holmes, 69, his elbow propped on a knee, was glad to field even the most mundane query about the easygoing man who answered a newspaper advertisement in 1987 looking for an apartment he could afford.

“I sat on these very steps,’’ Holmes said, “and talked to Barack Obama.’’

The kids pressed in, looking at the door to the low basement unit that a future president once called home.

“I was going to talk to you about America,’’ said Holmes, who has owned the building for 30 years and runs a heating oil delivery business. “You have a great opportunity to study hard and work hard and go as far as you can.’’

For the after-school students at The Elizabeth Peabody House, the field trip, an easy five-minute walk from their classroom, was a chance — if only for an hour — to connect with the man some consider their hero.

In a season of political bickering, partisan attacks, and hardball campaigning, the youngsters — unaware of the chasms dividing Washington and the rest of the nation — stood awe-struck, happy to be close to a man who was close to Obama.

“He told me he was going to Hahvahd Law School,’’ said Holmes, his speech betraying his Somerville roots. “He came to Somerville because you got more apartment for your money. He went a little further away from Hahvahd because it was what he could afford.’’

Holmes’s claim to presidential proximity has come up before, but was usually broached by political reporters sniffing out tidbits of a candidate’s past.

“The number one question was, ‘Did he pay his rent?’ ’’ Holmes recounted. “Yeah, he always paid his rent.’’

But the children were more interested in the personal details.

“What did the president do for fun?’’ “What was he like?’’ “Did he leave anything behind when he moved out?’’ “Did you meet Michelle Obama?’’

The meeting with the Peabody House students was the first talk Holmes has given about his years as landlord (1988-1991) to the future president.

It took a man steeped in African-American history to come up with the idea.

“I was quite shocked; no other school system reached out,’’ said Clennon King, 53, director of development and marketing at the Peabody House, who arranged the discussion.

“How is it that we cannot, especially with these kids who are struggling to achieve with their families the American Dream, how can we not teach them about their own community?’’

King, a former television and newspaper reporter who for years worked in America’s Sun Belt, is no stranger to history’s influence. His father, who worked as a lawyer for Martin Luther King Jr., sent King from Georgia to boarding school in Vermont following the civil rights movement that crested in the early ’60s, when the lives and livelihoods of outspoken activists were under constant threat. (The families are not related, King said.)

“He didn’t want to the sins of the father to be visited on the son,’’ King said.

His paternal uncle, Clennon Washington King Jr.
, was the first African-American to run for president as a party nominee, on the Independent Afro-American Party ticket in 1960.

King comes by his love of early education honestly. His mother, along with a white woman from Boston, started several early childhood education centers in her native Albany, Ga., whose missions are similar to that of the Peabody House.

So when he was hired about a year ago to do marketing at the Somerville learning center, which serves many low-income students of color, he said he felt responsible to deliver a higher message, one that he believes Obama’s life exemplifies.

With Holmes, he seized the opportunity.

“I want them to see in [Obama] themselves,’’ King said. “They need to know this is where they come from, and his story is also a measure of where they can go.’’

For the students, who ranged from 8 to 12 years old, the moment outside of 365 Broadway was a revelation.

Destiny Augustin, in the seventh  grade at Saint Catherine of Genoa School in Somerville, owns a T-shirt proclaiming “Barack Obama is my homie.’’ She said she was surprised to learn the president spent time in Somerville.

“I was excited because I knew he was a very important part of America,’’ she said . . . “to know that he lived just like we do.’’

Joey Albano, 11, a sixth-grader at the Arthur D. Healey School, said his principal played basketball with Obama before he was president, and that a relative, a parking enforcement officer in the city, had ticketed Obama’s vehicle..

“I didn’t know he lived in Somerville,’’ Albano said.

Marsha Marcelin, 11, a sixth-grader at Saint Catherine’s, said her mom, an immigrant from Saint Marc, Haiti, was as excited as she was when she learned about the expedition.

“She told me it was a really great experience,’’ Marcelin said. “When I grow up I want to have a better life than [my mom] had. Things were really tough for her.’’

After the field trip, Marcelin’s mother, Natacha Francois, 35, of Cambridge, said it was an important experience.

“I want her to know that no matter what color you are, you can be whatever you want,’’ she said. 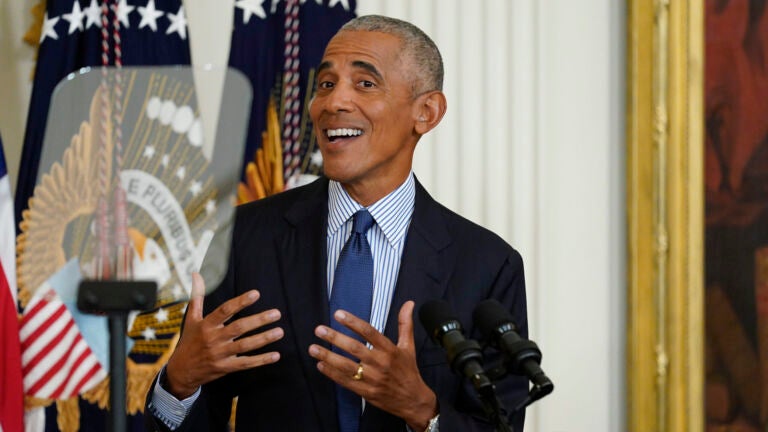 Obama tells Harvard team basketball was about more than him