Marcia and Ken Garber had two girls, Sarah born first, and five years later another girl, Kristen. From the time she was in preschool, Kristen dressed like a boy and played with the boys.

“She used to try to pee over the toilet, like a boy,’’ says Marcia, who is a nurse. She and Ken live in Quincy; he is a retired Waltham firefighter.

In early elementary school, Kristen insisted on playing football, so her parents signed her up for Quincy Youth Football. She was the only girl on the team. When she finally realized that the boys were getting much bigger, she moved on to ice hockey.

“What happened was we got through elementary school, then we went to middle school and it was really hard for Kristen,’’ says Marcia.

They have made videos for the Massachusetts Transgender Political Coalition (go to Marcia’s at www.youtu.be/_po94QU60uI, and Ken’s at www.youtu.be/UfG_CbpUSFM) that show grace in action, and they have testified on behalf of the Trans Equal Rights Bill and on the effect of discrimination.

“One of the biggest reasons I got involved was that there weren’t any parents speaking up for their kids,’’ says Ken.

The Garbers had no idea what transgender meant when, in 2003, a therapist finally put a name to the anger and isolation Kristen was experiencing. She had just finished middle school, where she had cut off her hair and was wearing boy clothes. Kids called her a lesbian. She had no friends.

Where many parents would freak out at the word transgender, the Garbers were relieved.

“There were so many struggles, and we couldn’t figure out why this kid was so miserable,’’ Marcia says.

Before Kristen entered North Quincy High School, her parents spoke to the school psychologist and other administrators. She was still dressing like a boy and played ice hockey — on the girls’ team.

The summer after her junior year, Kristen changed her name to Christopher and had breast removal surgery. Christopher, or CJ, returned to his senior year as a boy.

Throughout high school, he was on the high honors roll, but was always late for school.

Middle and high school can be perilous times even under the best of circumstances. Kids can be cruel, parents can be clueless. (If you hear your kid say, “That’s so gay,’’ do you explain why it’s a slur?)

As Ken Garber puts it: “It’s real and it happens and people don’t do this just because they feel like doing it. No guy says, ‘Geez, I think I’ll go dress up like a girl so I can go get beat up tonight.’ ’’

About those clueless parents: Ken’s co-workers and friends would talk about their sons playing football or baseball, but whenever he tried to talk about his son, no one was interested.

“I was more than happy to share it and show that I love my son. I wanted to say, ‘There’s nothing wrong with him. The problem is with you.’ ’’

CJ graduated from high school in 2007. He had a hysterectomy and began taking testosterone. With his endocrinologist’s help, he and Marcia got his birth certificate legally changed to “male.’’

CJ was excited about college, and wrote his essay about his difficult journey from girl to boy.

“I wished and prayed that someone would just take my life and release my heart from under what felt like a two-ton brick,’’ he wrote.

But as he made the transition, he wrote, he felt happy that he was “now being accepted for the man I have always felt I was!’’ Still, he struggled with whether he should tell college classmates.

“My heart thrives on finally being accepted and liked,’’ he wrote. “I am really scared to make this decision and if it doesn’t turn out the way I want it to and people do not accept me, I am fearful for my life.’’

CJ lasted a semester and a half at Lasell College in Newton, while living at home in Quincy. He never really connected with anyone at school, but did meet some through the Boston Alliance of Gay and Lesbian Youth.

His family was devastated when they learned he was using drugs, moving from marijuana to cocaine and finally, heroin. CJ ended up in a rehab program. But on Jan. 26, 2009, he died of an overdose. He was 20 years old.

“Isolation and drugs are a deadly combination,’’ says Marcia.

They can’t know for sure if his death was accidental, but they believe it was.

“I think he was looking for that euphoria,’’ she says.

Marcia and Ken are lifelong Catholics but left their Quincy church of 20 years and joined Dignity Boston, which describes itself as “a progressive, inclusive community of gay, lesbian, bisexual, and transgendered Catholics and our allies.’’

Marcia explains why: “I would sit in church and feel the pain . . . that my child was not going to be fully accepted in this Catholic church that we had been part of and my children had been active in.’’

Though their son is gone, Ken and Marcia remain active in gay and transgender causes. They are proud of CJ and how he stood up for who he knew he was. No doubt, he was proud of them, too.

Visit Why hasn't Josh McDaniels been interviewed for a head coaching job? 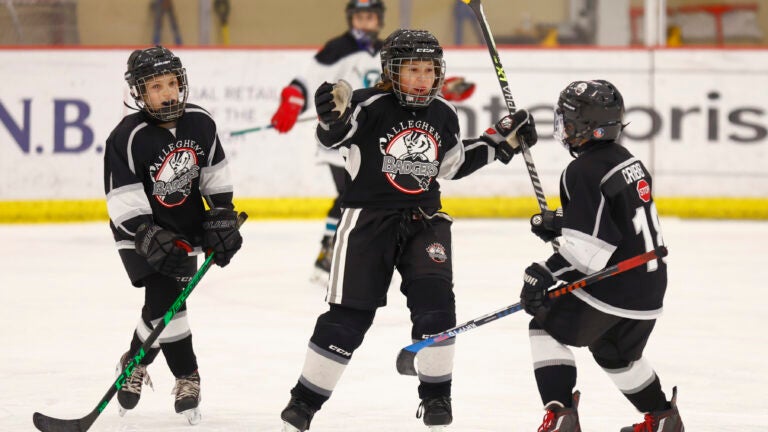 How does your 9-year-old’s hockey team rank nationally?