Hurricane Sandy, one of the largest storms ever to hit the East Coast, pummeled Massachusetts on Monday with punishing winds and dangerously high seas, flooding some coastal areas, and cutting power to hundreds of thousands of customers.

Utility companies that service the state at one point reported nearly 380,000 customers without power on Monday. That number had fallen to about 310,000 as of 3:15 a.m. on Tuesday.

The enormous storm, gaining speed as it roared north across the Atlantic, brought steady rain and sustained winds of 35 miles per hour through much of the day, with gusts nearly twice that strong.

Although Sandy’s landfall was in southern New Jersey, it cut a destructive path nearly a thousand miles wide, causing massive disruptions throughout the Northeast. It was classified as a post-tropical cyclone, rather than a hurricane, by the time it hit the New Jersey coast at around 8 p.m., the weather service reported.

In Massachusetts, heavy winds toppled trees and power lines, closing roads and causing more power outages throughout the day. Heavy surf pounded the coast, forcing evacuations in some low-lying areas in advance of the evening high tide, when storm surges were expected to exceed 6 feet.

“All of our shoreline could be affected,’’ said Brian Legendre, fire chief in Westport, a coastal town next to Fall River.

Utilities warned that because of the storm’s strength and duration, power outages could last a few days. The high winds would make it too dangerous for some repairs to occur, Governor Deval Patrick said in an evening press conference. Utilities would be working through the night to restore power where they can, he said.

State officials said there were no reports of any serious injuries.

David Procopio, a State Police spokesman, said that troopers were investigating a car crash that claimed the life of a man on Route 128 in Peabody at about 6:25 p.m., and that speed and weather were potential factors.

The powerful late-season storm, which killed nearly 70 people in the Caribbean, brought the Bay State to a near-standstill. As most people hunkered at home, major roads were half-empty, public transit shut down, and schools, malls, and businesses were closed.

Logan advised travelers to check with their airlines on the status of their flights before coming to the airport on Tuesday.

The MBTA stopped running shortly after 2 p.m. amid mounting reports of downed wires and branches and concerns that flooding would make parts of the system impassible.

“Shutting down public transit is never ideal. But under the circumstances, the safety of our customers and our employees is paramount,’’ said Richard Davey, the state’s transportation secretary.

The closing was announced at 10 a.m., prompting a rush for the final trains. By noon, South Station was at rush-hour bustle as riders headed home.

Davey said he hoped service would resume Tuesday morning but that crews needed time to survey the damage. By mid-afternoon, at least 15 trees or large branches had fallen on rail lines.

“We hope to run full service for tomorrow morning,’’ he said. “That would be our goal. But it is not guaranteed.’’

Commuter rail service was expected to resume with delays and with the suspension of the Providence/Stoughton Line between Mansfield and Wickford Junction. Pesaturo encouraged commuters to check the authority’s website at MBTA.com for updates.

Winds were expected to wane overnight, but a coastal flood warning was in effect until 1 p.m. Tuesday.

As Monday’s high tide approached under a full moon, Legendre warned that the “worst is yet to come.’’

Forecasters warned that the state’s southern coast from Westport to Fairhaven might experience severe flooding, potentially more damaging than Hurricane Bob in 1991. Some 1,300 National Guard soldiers were deployed, mostly to the eastern and southern coasts.

As Sandy moved toward the coast, the Category 1 hurricane packed winds up to 90 miles per hour, and forecasters said it could stand as the largest hurricane in New England history. Its air pressure — an indicator of the storm’s power — was the lowest ever recorded in the area.

“The lower the pressure, the more powerful the hurricane,’’ said Charlie Foley, a meteorologist with the National Weather Service in Taunton.

By about 11 p.m. on Monday, the effects of Sandy were beginning to taper off in the state, Weather Service meteorologist Stephanie Dunten said.

The storm was located just south of Lancaster, Pa., as of 2 a.m. on Tuesday, the weather service said.

In Massachusetts, the highest winds were mainly seen across Cape Cod, Dunten said, and wind gusts at Fort Independence, Hyannis Park, and East Falmouth were also in the 70 mile-an-hour range.

Light showers are expected Tuesday with winds gusting up to 20 miles per hour, and a coastal flood warning was still in effect late Monday until conditions could be evaluated after high tide, Dunten said.

The state of emergency declared by Patrick also remained in effect late Monday and will be lifted in the coming days, officials said.

In Waltham, about 25 families were forced to leave their homes when part of the roof was blown from two condominium buildings. One of the roofs was waving back and forth in the wind Monday night, and, at times, hanging about 10 feet over the edge of the building. Scraps of metal and wood littered the ground.

Despite the high winds, officials said the storm had not caused overwhelming damage.

In New Bedford, dozens of people took refuge at emergency shelters. Andrew DiIanni, 38, and Steve Correia, 28, said they have been living under a bridge near the downtown area. They initially tried to ride out the storm with a barrier of tarps. But by noon, the wind became too strong, and they called police for help.

“They were whipped in half, the wind was so strong,’’ DiIanni said of the tarps.

Just over a hundred people sought shelter in the state.

In Cambridge, a tree fell on the home of Chip and Susan Strang at 60 Fresh Pond Parkway, shattering windows, crushing a fence, and protruding into the house from the roof and front wall.

Outside 20 Howard St., a tree knocked down power lines and crushed the roof of a parked Nissan.

As the initial bands of rain and wind generated by the hurricane arrived on Cape Cod, life proceeded, albeit at a curtailed pace. And curiosity was at a premium, with storm watchers gathering along the shore.

At Bagels and Beyond in West Yarmouth, customers trickled in, a mix of emergency workers and people liberated from work for the day because of Sandy. Owner Julie Moran was there in the morning — but hoping to close a bit earlier than the normal closing hour of 2 p.m.

“None of us had work today,’’ said Bois, who cleans houses. “Basically, we’re probably going to go home now and not leave.’’

Sandy didn’t scare Jen and Jon Coil, a married couple staying at the hotel, who traveled from Philadelphia to Salem on Sunday.

“What difference does it make if the hurricane hits us in Philadelphia or Salem?’’ asked Jen, 30, a paralegal, making her first visit to Salem. “I do wish more things were open today. We were looking forward to visiting some museums.’’

In Scituate, as midnight — and high tide — approached, the angry sea still churned, though not as ferociously as earlier in the day. The wind was still announcing itself, just not as loudly. And the clouds had begun to part, revealing a full moon. 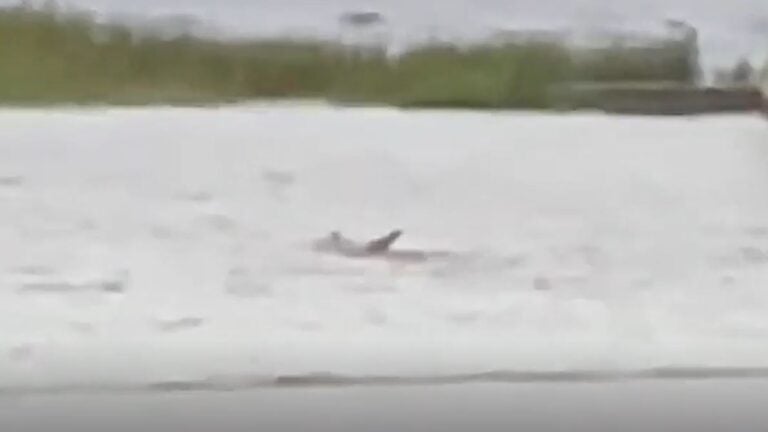 For once, the Hurricane Shark was real