Just in time for Halloween, a peculiar orange and black lobster has been discovered off Beverly, the New England Aquarium said today.

Dana Duhaime, a lobsterman from Salem, discovered the crustacean Sunday in one of his traps in Bakers Channel and an aquarium biologist picked up the one-pound female and brought it to the aquarium for its debut after Hurricane Sandy.

The “split’’ coloring occurs once in every 50 to 100 million lobsters, and scientists believe this occurs during a cellular division when the lobster egg is first fertilized, the aquarium said.

Orange and black is one of the most common color combinations. One side typically has the muddled dark brown or grey coloring caused by a mix of the red, yellow, and blue pigments found in American lobsters. Orange coloring in lobsters appears when the sea creature lacks the blue pigment, the aquarium said.

Split lobsters also often show sexual characteristics of both genders. But this festive crustacean is a female and has been named “Pinchy’’ by Duhaime, in reference to the lobster that appeared in an episode of “The Simpsons.’’

In the last 10 years, these bi-colored creatures usually have been caught in both Maine and Rhode Island. But this summer, split lobsters were discovered both Nova Scotia and Prince Edward Island.

The lobster will be quarantined before it appears in one of the aquarium’s habitat tanks or used for live animal presentations, said aquarium spokesman Tony LaCasse. 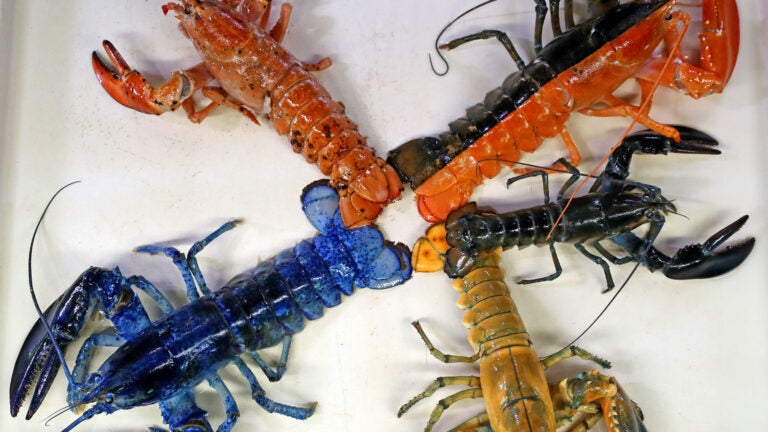 NEAQ gets blue lobster for exhibit