Doreen Reilly said her family can’t sleep at night because the wind turbine less than 1,000 feet away sounds like a “jet liner hovering’’ over her Kingston home. During the day, Reilly said, she gets headaches because the spinning blades from the 400-foot-tall structure cause sunlight to flash like “a strobe light’’ throughout her home.

“You can’t escape it,’’ said the Leland Road resident. “I’m very concerned for my family and their health.’’

A few streets over, on Copper Beech Drive, David Kennedy said his wife gets headaches from the moving shadows inside their home, and their children have trouble concentrating when this flickering occurs. In November, he filed five complaints with the Kingston Board of Health.

Amid a nationwide push toward wind power and other “green’’ energy sources, Reilly, Kennedy, and others in towns such as Scituate, Fairhaven, and Falmouth are among a small but growing number of people voicing concerns about wind turbines.

They worry about the long-term health effects of living so close to the machines, and question whether they belong in densely populated neighborhoods. Some say they’ve experienced sleep loss, migraine headaches, ringing ears, and increased blood pressure since wind turbines were installed near their homes.

Such complaints have often been met skeptically by wind-power advocates and the public at large, many of whom assume the complaints of noise, vibrations, and moving shadows are being exaggerated by a gaggle of NIMBYs.

According to wind-power advocates, turbines are far better for the environment and people’s health compared with fossil fuels.

“Wind power is the most affordable zero-emission source available,’’ said Larry Chretien, a Quincy resident and executive director of the Massachusetts Energy Consumers Alliance. Wind power produces “no carbon dioxide, no sulfur, no nitrogen, no particulates . . . . all things that cause problems with the planet and public health.’’

Chretien acknowledged that “we are hearing complaints in a couple of locations’’ from people
who live near turbines, but said that most wind projects, such as those in Hull, Ipswich, and most recently, Gloucester, have been successful and enjoy plenty of local support.

“In our viewpoint, 90 percent of [wind turbine] projects are sited responsibly and very much contribute to their communities,’’ he said.

Most wind turbines have been uncontroversial. Health and planning officials in Bourne, Everett, Ipswich, Medford, Plymouth, and Wrentham said they haven’t received any complaints about the turbines in their communities. (In Everett’s case, the turbine is located in Charlestown.)

Still, out of the 16 communities in Eastern Massachusetts that have working turbines, at least five — Kingston, Scituate, Newburyport, Fairhaven, and Falmouth — have residents who say that turbines near their homes have caused health problems.

Previous studies have shown that wind turbines may cause sounds that disrupt sleep, which can, over time, lead to various health problems. However, evidence showing a direct link between turbines and specific health problems is lacking. But in the wake of growing complaints, more research is on the way.

A few towns north of Kingston, some residents in Scituate have come forward with complaints about the 400-foot-tall turbine that began operating on the Driftway last April.

“Zoning is not doing a good job with wind turbines,’’ he said. “It’s a new use we really weren’t ready for. . . . The problem is, we got so enthusiastic about [wind power], and there wasn’t the zoning in place.’’

Senie represents 10 Kingston residents who claim to be suffering from the noise, vibrations, and spinning blades of the turbines, mostly at night. (Reilly and Kennedy are not among his clients.)

According to Senie, Cape Cod planning officials have determined that the distance between homes and turbines should be at least 10 times the diameter of the rotating blades. So a wind turbine with blades measuring 282 feet across would require a minimum setback of 2,820 feet. In Kingston, Fairhaven, Falmouth, and Scituate, several homes are inside that range.

Scituate’s director of public health, Jennifer L. Sullivan, said her office has received complaints from “15 different people,’’ mostly regarding noise, flicker, and sleep disruption. “We’re still in the discovery phase,’’ she said. “We’re going to have some testing done.’’

A committee has been formed to determine the scope of the testing. In the meantime, two residents who live 64o feet from the turbine — Mark and Laruen McKeever — filed a lawsuit on Dec. 14 against the Scituate Board of the Health. The McKeevers, who argue that the board erred in letting the turbine remain in operation, asked Plymouth Superior Court to send the issue back to the board for further consideration.

Board member Michael Vazza declined to comment, due to the pending litigation.

Further research is needed to figure out safe distances for wind turbines, said Michael Nissenbaum, a radiologist at the Northern Maine Medical Center who conducted a study of residents living near wind turbines in Mars Hill, Maine. His study found that noise from the turbines disrupted the sleep and impaired the mental health of residents living within 1.4 kilometers of the machines and had “the potential to harm human health.’’ Widely recognized for his work, Nissenbaum was asked to testify before an Australian Senate committee and to present his findings to the prime minister of Aruba.

“I think it’s ridiculous that people jump to conclusions that it’s a placebo effect . . . , ’’ Nissenbaum said in an interview. “To come out right out of the gate and say that these people are just making this up because they don’t like [wind turbines] . . . that’s malpractice, from a medical point of view.’’

Tim Dwyer, who lives on Country Club Way in Kingston, insists he’s not making up his symptoms. Dwyer said he and his wife have been awakened by a “constant and rhythmic grinding noise’’ that they could hear even with their windows shut, their air conditioning running, and a white-noise machine on. He also said he experienced a feeling of increased pressure in his ears.

“I have not jumped to conclusions and immediately blamed the turbines for my problems,’’ Dwyer wrote in an e-mail to town health officials. “To the contrary, I have tried everything I can to prove they are NOT the cause of my symptoms.’’ Dwyer and several other residents want tests to find out exactly how much low-frequency sound is being produced by Kingston’s turbines.

Harris Miller Miller & Hanson Inc., a noise-consulting firm based in Burlington, has been tapped to study one of Kingston’s turbines, a privately owned structure atop the capped landfill on Cranberry Road.

The firm will place noise-monitoring instruments around the turbine, with microphones about 5 feet from the ground (roughly the height of a human ear), to collect data on sound levels and frequencies.

One interesting finding is that “people seem to be more sensitive to sounds from wind turbines than from transportation sources,’’ said Christopher W. Menge, principal consultant and senior vice president with Harris Miller.

One possible reason is that unlike many other sources of noise, wind turbines don’t get quieter at night, so people notice them more, he said. He added that the pulsating noise of turbines “sounds different. It’s unusual in the environment. It’s something new.’’

Overall, Menge said, “there’s nothing conclusive in terms of health effects’’ of turbines; “the research is still a little bit young.’’

Even the research that exists is controversial.

“It’s a very challenging issue right now,’’ said Stacie Nicole Smith, a professional facilitator with the Consensus Building Institute, a Cambridge-based nonprofit that specializes in negotiation and dispute resolution. “There is, I’d say, on all of the sides, people who have a hard time seeing other points of view.’’

Smith was hired by the Massachusetts Clean Energy Center, the state’s green-energy agency, to make sure the Kingston study is “credible and legitimate.’’

“Past sound studies have resulted in ongoing arguments about whether the results are legitimate,’’ said Smith, who has served on the Falmouth Wind Turbine Options Committee for the past nine months.

Kingston’s Board of Health wants all of the turbines in the landfill area to be studied, and will discuss turbines at its Jan. 14 meeting. Kennedy, of Copper Beech Drive, plans to attend.

“I had no idea the turbines were going to be over 400 feet tall. I had no idea it would affect my family’s quality of life,’’ he said. “Part of me would just like it to go away. Part of me says they should be moved to a less densely populated area.’’

At the meeting, Board of Health member Dan Sapir said, he plans to propose shutting down the turbines temporarily.

“I feel very badly for these people,’’ he said. “And I have no doubts their complaints are justifiable.’’ 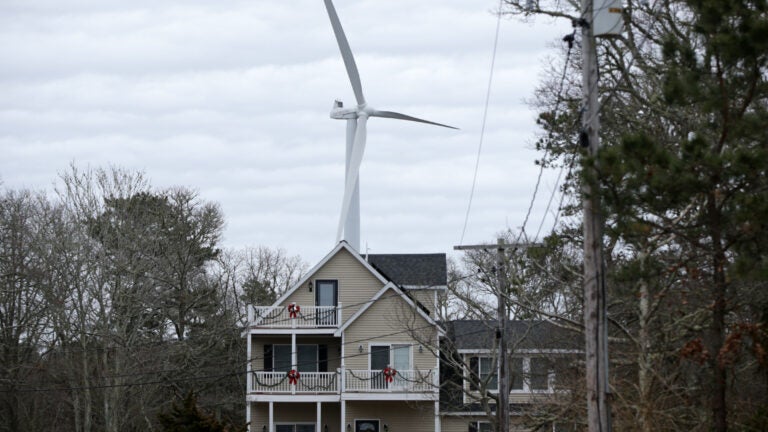