While it seems nearly everyone in Boston is sick or recovering from some kind of ailment, many are wondering what they’ve come down with and how to best manage their symptoms. Do they have the flu or the stomach flu? Is it possible to have both at once?

Dr. Joshua Kosowsky, vice chair and clinical director of Brigham and Women’s Hospital’s emergency department, told me he’s seeing a lot of patients with influenza — aka the flu — and some with an intestinal bug that’s circulating called norovirus — aka the “cruise ship’’ virus.

How do you tell the difference between the two?

At first blush, it seems fairly simple. The flu is an upper respiratory infection that causes sore throat, chills, body aches, runny nose, and coughing. Norovirus is a gastrointestinal illness that causes diarrhea, vomiting, and nausea. Both can lead to severe dehydration if you don’t drink enough fluids.

“Both infectious diseases are very common and very contagious,’’ said Kosowsky. “It’s not inconceivable to get both this season.’’

Usually the body doesn’t come down with two infections at once, but it can get infected with one bug right after the other if the immune system is weakened.

Many people, though, who have been infected with this season’s Type A flu strain that’s predominant in the Boston area have developed gastrointesintal symptoms — vomiting, stomach cramps, mild diarrhea — on top of their cough and runny nose.

“There is some overlap between flu and norovirus symptoms this year,’’ said Kosowsky, and it’s probably due to the nasty H3N2 strain that’s circulating and causing more severe flu symptoms than normal.

But, he emphasized, the vomiting and diarrhea associated with norovirus tends to be more explosive and intense.

Both conditions should be managed by getting plenty of rest, taking over-the-counter pain relievers to reduce fever and aches, and avoiding close contact with others for the first few days. Drink plenty of fluids, and if you aren’t able to eat much solid food, make sure those fluids contain some salt and sugar — juice, soup, sports drinks, for example — to keep your electrolytes in balance.

Here’s more on how to manage your flu symptoms and here’s how to deal with norovirus. 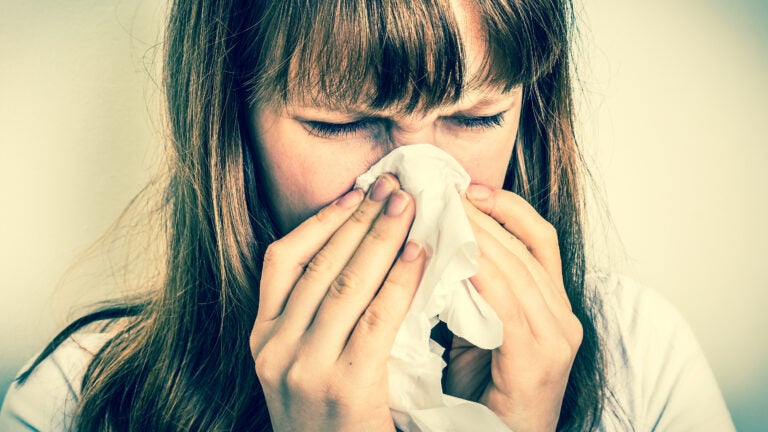 Is it the 'worst cold ever,' the flu, or COVID? Winter is coming.