For more than 100 years, beachgoers in Lynn and Nahant called it “the smell.’’ It came from a rare algae that settled and decomposed on local beaches. For decades, scientists were puzzled about how to eliminate the odor. Finally, in 2008, the Department of Conservation and Recreation decided to send out work crews with front-end loaders to scoop up the algae every morning from April to November.

That plan worked for five years. But last July, the odor returned for about six weeks when the brown algae, known as Pilayella littoralis
, was allowed to cake up on Nahant and Lynn beach. As it decomposed in sand under the hot sun, the algae, which can rise up like a bronze carpet on hundreds of yards of sand, released a sulfide odor akin to the smell of rotten eggs.

DCR Commissioner Edward M. Lambert Jr. said he is confident that the smell will be contained this summer. He attributed last year’s reoccurence to a change in staff that led to a 10-day gap in algae removal.

“We had lost one position,’’ Lambert said. “It was a retirement, and it happened to coincide with someone who was out on vacation at the same time. And the staff got behind.’’

By late August,
DCR crews had caught up with the algae bloom, removing thousands of pounds of algae each week. Lambert said the state spends $150,000 each year on removal.

Robert Tucker, president of the Friends of Lynn & Nahant Beach, called last summer’s odor “a hiccup,’’ but said it was an example of how the algae can change the area’s quality of life if not contained. He said the lobby of his oceanfront apartment building smelled for several days.

“You can’t play Russian roulette with it,’’ Tucker said. “You have to get it daily.’’

Last summer’s smell reminded many of the decades when the odor was taken for granted by those who live by the sea. Bathers stayed away from the water and sand. Drivers closed their windows, and residents did the same. Some, like Suzanne Ryan, occasionally held their breath.

“It was pretty bad,’’ said Ryan, a Lynn resident who walks regularly along Lynn Beach. “I had my Mom with me, who is 89, and she was just aghast at the smell. It was making her nauseous.’’

Brian Quade of Swampscott considers the algae an afterthought when he rides his bike along the beach. “I realize it’s algae, and it’s a natural thing, but it just stinks,’’ he said.

Until five years ago, scientists and marine biologists were conflicted about how to remove the heavy algae, which drifts with the winds and tides and washes up on the shores of beaches in Lynn, Nahant, and Swampscott.

The DCR acted on recommendations from scientists, residents, and state legislators to send out front-end loaders at morning low tides to rake it off the sand. During the winter months, the crews just push the algae back into the water, since the smell only occurs in warm weather when it is allowed to decompose on the sand. Still, DCR workers have their hands full: every pound that washes back into the sea can grow to 100 pounds within three months.

In Swampscott, residents are dealing with a growing algae problem, because the town owns the beaches and is maintaining them without the aid of the DCR.

Gino Cresta, Swampscott public works director, said that in
summer months, town crews use a backhoe rake to drag the algae back into the sea on King’s Beach, Fishermen’s Beach, and Eisman’s Beach.

“We just rake it down to the low tide [mark], and the tide takes it out,’’ said Cresta, who said the algae does not always wash up on shore on schedule. “Most of the time it’s an act of futility.

“It’s cost-prohibitive to take it away, but if we drag it down to the low tide [mark], sometimes it stays out for weeks at a time, and sometimes it comes right back in.’’ 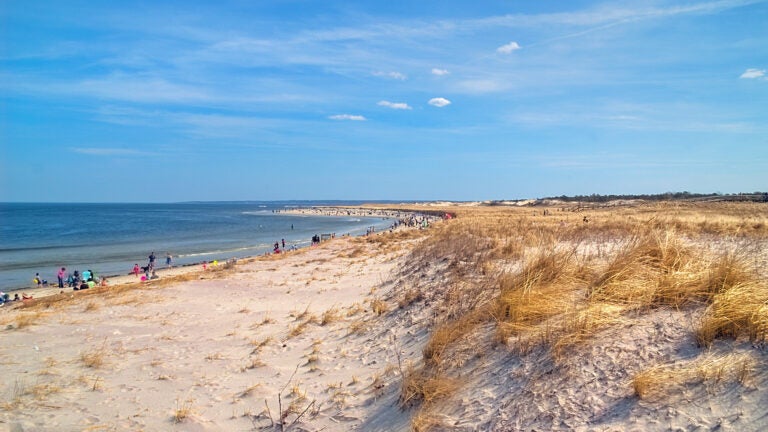 62 Massachusetts beaches you need to visit at least once