NASCAR comes down hard on Kenseth

NASCAR hit Matt Kenseth and Joe Gibbs Racing with one of the largest penalties in the sport’s history Wednesday after the engine from Kenseth’s winning car at Kansas failed a postrace inspection. The team had nothing to do with the error, and manufacturer Toyota immediately accepted responsibility for one of eight connecting rods failing to meet the minimum weight requirement by 3 grams — less than an empty envelope. Kenseth was stripped of everything but the trophy from Sunday’s win. He was docked 50 driver points in the standings — he earned 48 points for the victory — and NASCAR also erased the three bonus points he earned for the win that would have been applied in seeding for the Chase for the Sprint Cup championship. In addition, the victory will not be credited toward his eligibility for a wild-card berth in the Chase. The penalty to Kenseth, who held off Kasey Kahne of Hendrick Motorsports to earn his second win of the season, dropped him from eighth to 14th in the standings. NASCAR also suspended crew chief Jason Ratcliff for six races and fined him $200,000. And in a rare move, car owner Joe Gibbs had his owner’s license suspended for the next six races and he won’t earn car owner points during that time. He also was docked 50 car owner points while Toyota, which supplies the JGR engines through Costa Mesa, Calif.-based TRD, lost five points in the manufacturer standings. JGR said it would appeal . . . Denny Hamlin has not been cleared to race at his home track in Richmond Saturday as he had hoped. Hamlin sustained a compression fracture of a vertebra in his lower back in a last-lap accident at California March 24. Hamlin has missed three races so far.

Grizzlies center Marc Gasol has won his first Defensive Player of the Year award after anchoring the league’s stingiest defense. Gasol received 212 points and 30 first-place votes to edge Miami’s LeBron James, who had 149 points and 18 first-place votes. The 7-foot-1-inch Spaniard averaged 1.7 blocks and 1.0 steals for a Memphis defense that allowed a league-best 88.7 points per game. The five-year veteran ranked 12th in the league in blocks. Former Celtic Tony Allen, Gasol’s teammate, finished sixth in the voting.

Liverpool striker Luis Suarez was handed a 10-match ban for biting an opponent during a Premier League game, one of the most severe sanctions meted out by English football for on-pitch misbehavior. A disciplinary panel ruled that a regular three-match ban for violent conduct was ‘‘clearly insufficient’’ and added seven games to the suspension, which rules Suarez out for the rest of the campaign and for the first six matches of next season.

Senators defenseman Erik Karlsson will travel with his teammates to Washington for Thursday night’s game, although his playing status has not been determined. The Norris Trophy winner last season as the NHL’s top defenseman, Karlsson sustained a serious injury to his Achilles’ tendon Feb. 13 and had surgery, but recently returned to practice . . . Kings captain Dustin Brown was suspended two games without pay by the NHL for elbowing Wild forward Jason Pominville Tuesday night . . . Canucks goaltender Cory Schneider will miss their final regular-season home game because of an unspecified injury. Vancouver’s expected starter in the playoffs is listed as day to day . . . A day after clinching a sixth consecutive playoff berth, the Capitals re-signed forwards Eric Fehr and Aaron Volpatti.

A leading trainer from the powerful Godolphin stable was charged in connection with one of the biggest doping scandals to hit British horse racing. Mahmood Al Zarooni was charged with violating multiple rules related to banned substances in horses after samples from 11 of his horses at stables in Newmarket were found to contain traces of anabolic steroids. The British Horseracing Authority also charged the 37-year-old trainer with failing to keep medication records and with conduct prejudicial to the sport . . . Godolphin is the racing organization of Dubai ruler Sheikh Mohammed bin Rashid al Maktoum, who has owned a number of the world’s greatest horses since establishing his operation in 1992. The racing outfit said he was ‘‘appalled’’ by the doping case . . . Storm Cat, the thoroughbred stallion who once commanded one of the highest breeding fees in North America, died at Overbrook Farm in Lexington, Ky. He was 30 . . . . The horse was euthanized because of complications from old age . . . Longtime Eastern Connecticut State baseball coach Bill Holowaty was suspended with pay for the rest of the season for throwing a helmet into the bleachers during a game and failing to comply with school directives and policies, university officials said . . . The first championship game in the College Football Playoff will be held at Cowboys Stadium in Arlington, Texas, Jan. 12, 2015. 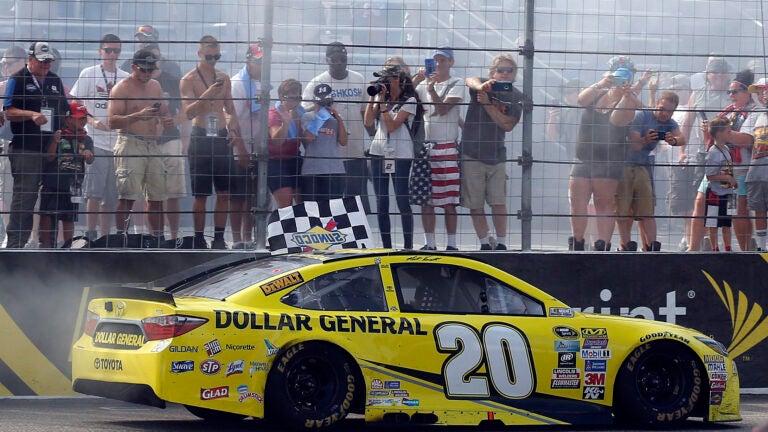