A political action committee that issued automated campaign calls to boost Democratic US Senate candidate Stephen F. Lynch said Thursday that it would halt the advertising, after Lynch disavowed the message that seized on the tragedy at the Boston Marathon.

“All of us share the shock and sorrow of the recent events in Boston,’’ said the automated calls, recorded on area answering machines Wednesday. “But as Americans, we’re not going to let the perpetrators of this tragedy or anyone else stop our democracy from moving forward.’’

The message goes on to state, “Wouldn’t it be great to have a real working person representing you in the US Senate? Not just another millionaire. Someone who truly understands the day-to day problems facing regular working families.’’

“Someone like Steve Lynch, the highly skilled and well educated ironworker who put himself through law school at night. In Congress, Steve Lynch has fought for Massachusetts working families not just when it was convenient or easy, but every day. That’s what you’d expect from an ironworker.’’

Lynch, a US Representative from South Boston, was an ironworker and leader of the ironworkers’ union before becoming a lawyer and entering politics in the 1990s.

The recording says it was paid for by the “99 Percent PAC,’’ a political action committee that uses the slogan of the Occupy Wall Street movement to suggest it is speaking for average Americans who are not millionaires.

However, the treasurer of the group that paid for the calls is also treasurer of the ironworkers union that endorsed Lynch, the International Association of Bridge, Structural, Ornamental and Reinforcing Iron Workers Union, AFL-CIO.

Lynch spokesman Scott Ferson said the campaign knew nothing about the calls and noted that campaigns are forbidden from coordinating advertising with independent political action committees.

“We disavow it, want it to stop, wish it hadn’t happened,’’ Ferson said. “We know that momentum is moving our way and we do not need ‘help’ in stalling the momentum.’’

The Lynch campaign has cited internal polling from last weekend to suggest that Lynch is gaining support and closing in on the lead of US Representative Edward J. Markey, his Democratic opponent in Tuesday’s primary.

The recorded message apparenty backfired with some Democratic voters. One person posted on the liberal blog, Blue Mass Group, that the wording and timing of the call “lost him my vote.’’

McHugh said his group meant no offense and that ironworkers identify with first-responders, having worked in the aftermath of terrorist attacks in Oklahoma City and in New York on Sept. 11, 2001.

“There was no intention of upsetting everybody or trying to shine a light on anything in an unkind way. That was never, ever the intention,’’ he said.

Told that some voters felt uncomfortable with the language, McHugh responded, “I guess as an ironworker we get mad about issues like this. We don’t get squirmy or squeamish, we run at them.’’

Meanwhile, on the Republican side, candidate Gabriel E. Gomez also issued robocalls this week alluding to the tragedy.

In his recorded message, Gomez, a former Navy SEAL, released an automated call Tuesday, framing himself as a non-politician who understands the peril the United States faces.

“I’m running for the United States Senate in the April 30 Republican primary, but I’m not a politician,’’ he says in a recording of the call, provided to the Globe by a rival campaign. “I know first-hand the dangers and challenges our country faces, but I also know the strength and resolve of our people.’’

Gomez, a Cohasset private equity investor, has run a campaign heavy on biography, working to differentiate himself from his two GOP opponents, former US attorney Michael J. Sullivan and state Representative Daniel B. Winslow.

In the call, Gomez notes he’s a first-generation American and attended the US Naval Academy and asks for the “opportunity to serve our country again,’’ before directing those called to his website.

Automated calls, often referred to as robocalls, are a way to reach a much more specific universe of voters than television advertising, in this case, probably those who are most likely to vote in Tuesday’s primary.

The general election is slated for June 25. 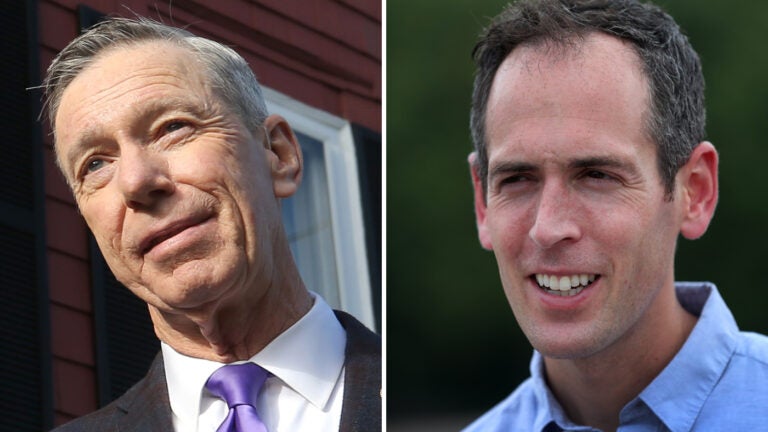 How exactly would Stephen Lynch and Robbie Goldstein vote differently in Congress?