SOUTH KINGSTOWN, R.I. — Bishop Robert J. McManus, the leader of the Roman Catholic Diocese of Worcester, kept silent in court today as his attorney entered a not-guilty plea to charges that he was driving drunk during a crash last weekend and then fled the scene. 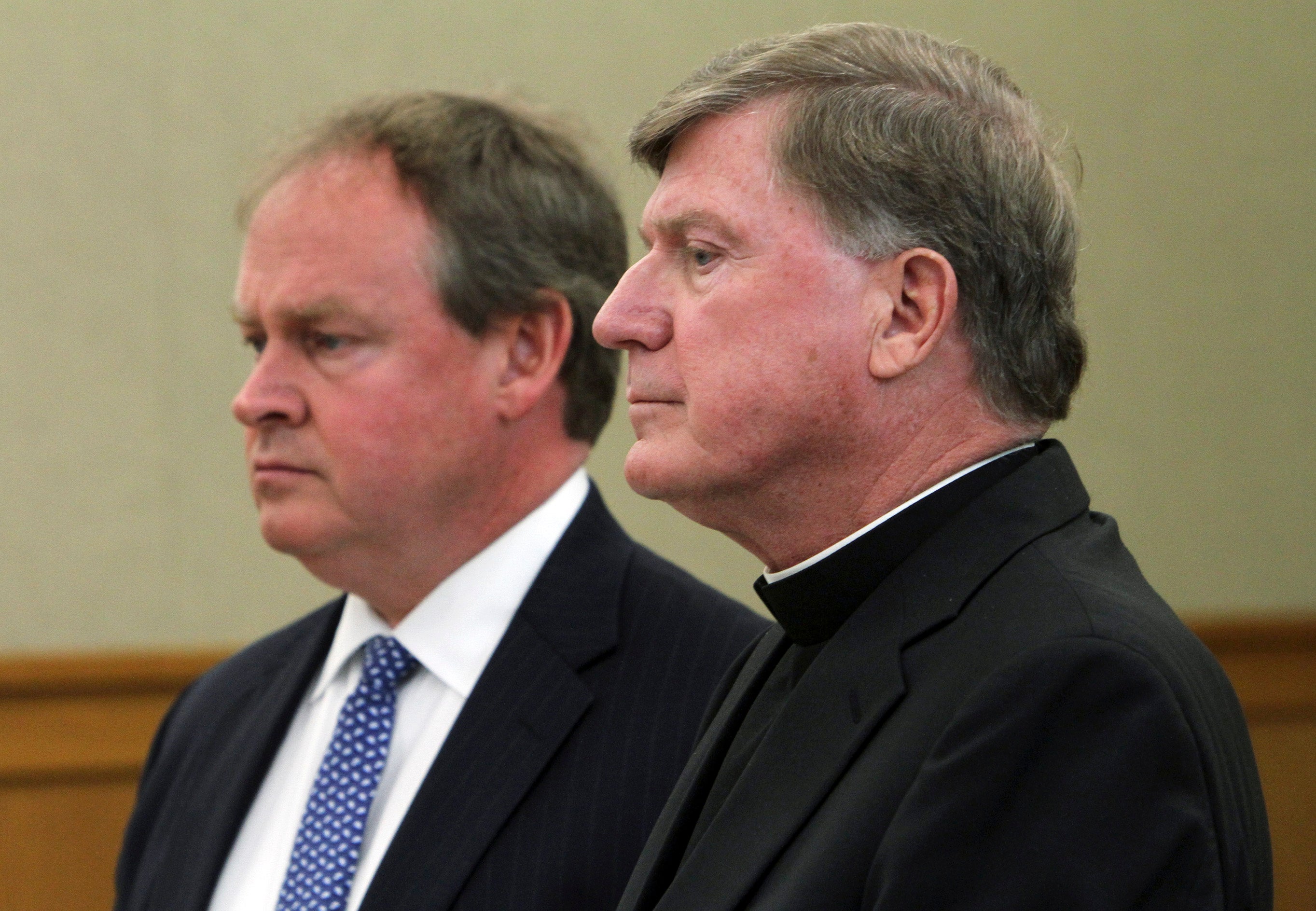 The arraignment lasted about two minutes. McManus, who appeared in the black suit with white clerical collar usually worn by Roman Catholic priests, did not speak. After the arraignment on the two misdemeanor charges, Murphy spoke briefly with reporters as McManus stood silently by his side.

Murphy said he had instructed McManus not to speak about the incident, and referred reporters to the statement issued by McManus Monday in which the bishop said he had made a “terrible error in judgment.’’

McManus was arrested by Narragansett police Saturday after he allegedly had a collision with another vehicle at the intersection of Boston Neck and Bridgetown roads Saturday and then drove away.

According to police, McManus collided with a car being driven by John L. Smith, who lives near the site of the crash at the intersection of Bonnet View Drive and Bridgetown Road, before driving off. Smith followed McManus about two miles until McManus pulled into the driveway of a home on Colonel John Gardner Road, owned by McManus’s siblings.

Smith, according to police, did not immediately seek medical attention, but he later called police and told them he was going to be examined at South County Hospital to be treated for pain.

According to his wife, Laura, Smith is a third-shift dispatcher for the Warwick police department.

When asked how damaged her husband’s car is, she replied, “enough.’’

She declined further comment and referred reporter’s questions to an attorney.

According to a report written by Narragansett Police Officer Kevin L. O’Connor, McManus was standing outside his Honda when he arrived.

“I could detect a moderate odor of alcohol emanating from his mouth as he spoke. McManus’s face was red and his eyes were severely bloodshot,’’ O’Connor wrote, adding that it took McManus 15 seconds to get his wallet out of his pocket. “I asked McManus what had taken place, McManus started speaking and slurring his words to the point it was difficult to understand.’’

O’Connor said McManus then told him that “he may have hit a vehicle but he didn’t realize he did.’’

McManus was arrested by O’Connor after McManus failed three field sobriety tests: Following the officer’s finger as he moved it in front of McManus’s eyes, walking an imaginary line for nine steps, and standing on one leg while counting to 10.

“I had to remind McManus numerous times to keep his head still and to continue to follow my finger with his eyes,’’ O’Connor wrote. “McManus was still swaying and I could detect the odor of an alcoholic beverage emanating from his mouth.’’

O’Connor wrote he then shifted to the second standard field test, known as the “walk and turn test’’ which requires a suspect to take nine steps, heel to toe, along an imaginary line while counting aloud as each step is taken.

O’Connor then asked McManus to complete a third test: Standing on one foot with arms to the side while counting aloud, “one thousand one, one thousand two’’ until ordered to stop.

“McManus raised his right foot and raised his arms close to parallel to the ground, McManus was swaying,’’ O’Connor wrote. “McManus quickly counted ‘One thousand, two thousand, seven thousand, eight thousand’ he put his foot down and stepped to the right. McManus tried two more times but could only keep his foot up for a second, each time starting his counting back over.’’

O’Connor said he halted any further testing out of concern for McManus’s safety and then arrested him for operating under the influence. The bishop was handcuffed and taken to the police station for booking.

McManus told police he had a glass of wine and a Manhattan mixed drink about 3½ hours before his arrest. He did not say where he drank the alcohol, nor did he identify anyone he was dining with on Saturday night.

At the station, McManus refused to take a chemical breath test and was cited under Rhode Island law for that refusal.

In the statement issued Monday, McManus apologized for his actions.

“On Saturday evening, May 4, I made a terrible error in judgment by driving after having consumed alcohol with dinner,’’ he said in the statement. “There is no excuse for the mistake I made, only a commitment to make amends and accept the consequences of my action. More importantly, I ask forgiveness from the good people whom I serve, as well as my family and friends, in the Diocese of Worcester and the Diocese of Providence.’’

McManus had a clean driving history prior to his arrest in Narragansett, according to a copy of his record released Monday by the Massachusetts Registry of Motor Vehicles. However, his license may soon be suspended because under state law, a drunk driving charge in another state is treated as if took place in the Bay State, an RMV spokesman said.

McManus was installed as the fifth bishop of Worcester in May 2004 and was appointed by Pope John Paul II, according to a biography posted on the diocese’s website. The Providence native holds degrees from the Catholic University of America in Washington, D.C., the Toronto School of Theology, and the Pontifical Gregorian University in Rome, the biography states.

McManus made news last year when Anna Maria College in Paxton, west of Worcester, rescinded a speaking invitation to Victoria Reggie Kennedy, the widow of the late US Senator Edward M. Kennedy, citing pressure from the bishop. Victoria Kennedy’s stances on abortion, gay rights, and health coverage for contraception are at odds with Catholic teaching.

In 2007, McManus asked the College of the Holy Cross in Worcester to refuse to rent space to a conference on teen pregnancy because Planned Parenthood and NARAL Pro-Choice Massachusetts had representatives among the many attendees.

His diocese was at the center of another controversy in January, when it rescinded an invitation to Robert Spencer, a Catholic whose work depicts Islam as an inherently violent religion, to speak at its annual Catholic Men’s Conference.

McManus is due back in court May 28. 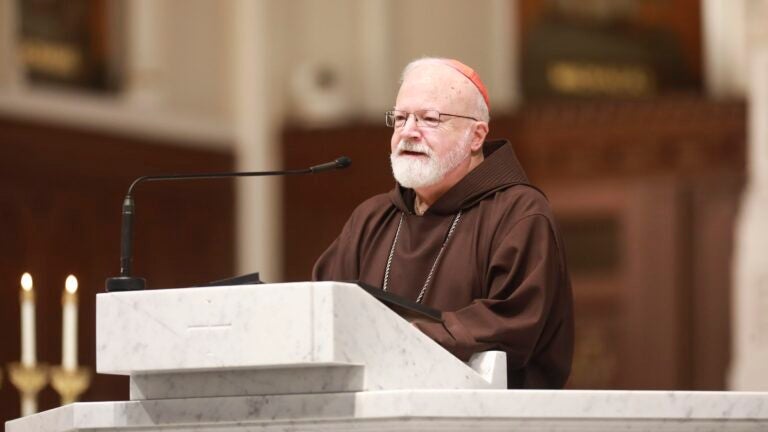