A fired-up Governor Deval Patrick praised Democratic US Senate hopeful Edward J. Markey at a political gathering on Wednesday night and called for a grassroots, door-to-door campaign to elect him.

In addition, Patrick pushed back against a GOP narrative that Republican nominee Gabriel E. Gomez is the new, fresh, non-politician Massachusetts is looking for.

“There’s a lot of talk right now in this election about new faces, fresh faces. I like that. I used to be one!’’ Patrick, in his second term, said to laughter in a packed pub in downtown Boston.

Patrick called for supporters to personally make their case for Markey to friends, coworkers, and neighbors.

“It’s got to be about you and by you for us all,’’ he said, as people pushed forward in the crowd at The Place on Broad Street to snap photos and take videos on their smart phones.

“Tell ’em, Deval!’’ yelled a woman in the audience.

Markey, who said he was suffering from allergies, took the stage and delivered a decidedly less potent speech, his voice hoarse. Still, the crowd, ethnically diverse and skewed toward people in their 20s and 30s, cheered him on.

He emphasized where he stood on the issues, from a ban on assault weapons to a focus on the environment to being in favor of a pledge to reduce outside spending in the race, to supporting abortion rights.

“I am running for the United States Senate because I believe a woman has a right to choose,’’ he said to loud applause.

John Walsh, the chairman of the Massachusetts Democratic Party, closed out the campaign event, rallying the crowd to work hard to elect Markey in the days between now and the June 25 election.

After the event was over, a smiling Markey posed for photos with supporters outside. One group yelled, “Latinos unidos con Markey!,’’ or Latinos united with Markey, as the picture was taken.

The special election on June 25 is to fill the seat vacated by John F. Kerry, now the secretary of state. 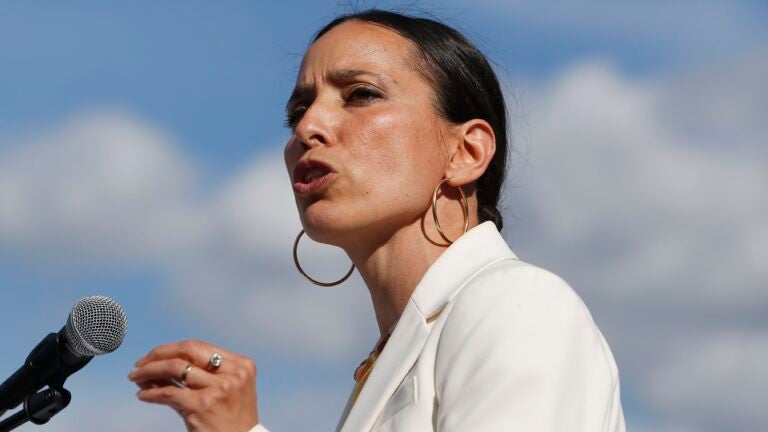