My weight shifted to my right leg as I prepared to take Tree Pose, a position that had been a part of my nearly daily yoga practice for years. I was used to taking some of the fullest forms of the pose, designed to test balance while strengthening one leg and lengthening the other.

But this evening, as I tried to steady myself to lift my left foot up to rest along my inner thigh, it barely moved. I tried again, feeling my right foot shift its weight to the outer edge, taking with it my entire body.

I closed my eyes, tried to remind myself to breathe and try again. Opening my eyes to set my focal point, I was looking not at the normal spot along the front wall of a yoga studio, but at a mangrove tree swaying in the breeze in the middle of a clear-water lagoon in Tulum, Mexico.

It was the first time I had practiced yoga on a stand-up paddleboard. On vacation in the summer of 2011, it was a new way to try poses that my body had become accustomed to while getting out and enjoying the water. I wondered if I would ever get a chance to
try the sport again in New England.

Nearly two years later, stand-up paddleboarding is one of the fastest-growing water sports. Nowadays, it is quite common to see yoga and non-yoga practitioners flocking to local outfitters, sporting goods stores, and parks and recreation departments for a chance to try the sport of “walking on water.’’

Parks and recreation departments in Plymouth and Marshfield are offering classes over the summer. Local outfitters are experiencing steady growth in customers renting stand-up paddleboards.

In 2012, Duxbury Bay Maritime School launched its stand-up paddleboard, or SUP, program, featuring adult and junior sessions, sunrise and sunset classes, and group and private lessons. This summer, following the success of its first year, the school is expanding its program to offer SUP yoga, SUP fitness, and SUP racing. It hosted an open house

last Saturday, and launches its summer program this Saturday.

“It’s growing so much, and it was really well received, that it really was a no-brainer to bring the program back, with more offerings,’’ said program instructor Shannon Delvecchio. “It’s such a cool sport and really accessible for a lot of different people, so there’s an appeal there that you don’t find in other water sports.’’

Delvecchio first started paddleboarding with her family in Key West, where the sport has been a daily activity of many for decades. She will teach the majority of the paddleboarding classes at Duxbury Bay Maritime School this summer.

Stand-up paddeboarding, also called paddlesurfing, can be traced to Hawaii, where it originated as a form of surfing. The sport reemerged in the 1960s when surf instructors would simply stand on their boards to take photographs. Surfers would use the technique to paddle further and catch waves in a set, due to a better view.

After the first stand-up paddleboard — the All Around, developed by custom surf shaper Jimmy Lewis — was introduced on the mainland, the sport took off and is turning into a global pastime.

“This is something people are doing all over the world,’’ said Delvecchio. “It’s something you can do anywhere there’s water, really — in lakes, rivers, or even in the ocean. You can make it really fitness- or surfing-based, or you can make it a serene experience and never even stand up if you’re just floating down a river.’’

Meanwhile, businesses like LL Bean in Dedham and Mansfield are offering comprehensive stand-up paddleboarding programs. The outlets are holding an introduction to stand-up paddleboarding class on June 29, July 27, and Aug. 24 in the Dolan Center in Dedham. The three-hour course will give participants an overview of the history of the sport, water safety, equipment, launching, transportation, and stroke techniques.

LL Bean also offers a longer stand-up paddleboard discovery course, in which paddlers will explore different bodies of water, incorporating exercise and leisure while honing fundamentals and moving to more advanced skills. Dedham and Mansfield’s classes have begun and will be held through Aug. 17. Classes meet once a week for about two hours.

“I’m not surprised you have these huge stores getting in on it,’’ said Delvecchio. “It was only a matter of time before the sport made its way up here to New England and people started jumping on it for the few months of nice weather we have.

“I’m sure some of them who really fall in love with it will start planning adventures and trips that involve paddleboarding in different places around the world.’’ 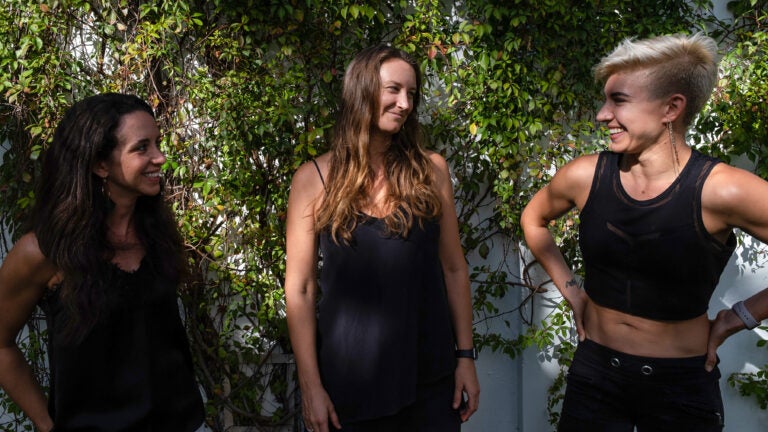