Stephen Rakes, a former South Boston man who had waited decades for a chance to testify against James “Whitey’’ Bulger, was found dead in the Mill Street area in Lincoln on Wednesday, authorities said today.

The cause of death is being determined by the state medical examiner’s office. An autopsy found no signs of trauma on the body; toxicology tests are underway and generally take several weeks to complete, authorities said this afternoon.

The case is being investigated by State Police and Lincoln police, according to a statement released by Middlesex District Attorney Marian T. Ryan.

Davis said Rakes introduced him to cycling and the two of them frequently took long rides from Milton and Quincy to Castle Island in South Boston.

He said Rakes, who lived in Quincy, had talked about buying property in Lincoln and suggested that Rakes may have been in the town to look at property.

Rakes, 59, was one of the most determined of Bulger’s alleged victims, still furious at the notorious South Boston gangster and his allies, Stephen “The Rifleman’’ Flemmi and Kevin Weeks, for allegedly extorting his South Boston liquor store from him at gunpoint in 1984 — while Rakes’s daughters were in the same room.

Rakes described the harrowing incident to the Globe in 2001 when he filed a civil lawsuit against federal officials. The suit was thrown out in 2005 by a federal judge who ruled he had waited too long to begin the litigation.

Boston attorney Anthony Cardinale, who represented Rakes’s ex-wife, Julie Dammers, in civil litigation connected to Bulger and the liquor store, said today that both Dammers and one of Rakes’s daughters were shocked by his sudden death.

“They were shocked to hear he passed away and anxious to find out about any details they can,’’ Cardinale said.

Cardinale, who helped expose the connection between the FBI and Bulger and Flemmi, who were prized FBI informants during their reign of terror in Boston’s underworld, said he did not believe Rakes’s death had any connection to the ongoing prosecution of Bulger.

“All I can say is I seriously doubt it has anything do with any part of this case,’’ Cardinale said. “That’s my sense.’’[fragment number=2]

Rakes has been a constant presence at the US District Court in South Boston where the 83-year-old Bulger has been on trial for the past six weeks, a trial that took place only after Bulger was captured in California two years ago after spending 16 years on the run.

Rakes, who was on the witness list of US Attorney Carmen Ortiz, was told Tuesday that prosecutors did not plan to call him to testify, a decision that Steve Davis said had devastated Rakes.

Davis said Rakes perceived the decision by Ortiz’s office as robbing him of the opportunity to refute claims made during the trial by Kevin Weeks, Bulger’s former protege, that Rakes had sent his sister, Mary O’Malley, as an intermediary to Bulger and Weeks, asking if they were interested in buying his liquor store.

Weeks testified that they agreed on a price of $100,000, but when Bulger, Weeks and Flemmi, tried to close the deal Rakes demanded more money.

“He [Rakes] tried to shake us down,’’ Weeks said on the witness stand during Bulger’s trial.

At that point, Weeks said, the three gangsters grew infuriated and pulled a gun in front of Rakes’s small children at his home in South Boston, threatening Rakes unless he sold the store.

But Rakes told a vastly different story, saying the gangsters approached him in what amounted to a hostile takeover. They told him to take the money or he would be killed.

A US attorney’s spokeswoman declined comment on Rakes’s death.

Rakes went to Florida after the incident, and rumors were so rife in South Boston that Bulger had killed him that Bulger called him in Florida and demanded that he return. When he did, Bulger and Weeks made a point of standing with Rakes at busy intersections in South Boston so the word would circulate that Rakes was alive.

In a series of interviews at the courthouse today, Davis said he knew something was wrong when Rakes did not call him back Wednesday.

Davis said he was told by authorities that Rakes was still dressed in the clothes he was wearing Tuesday when he was found in Lincoln.

News of Rakes’s death hit hard among other relatives of Bulger’s victims, including Patricia Donahue, whose husband was allegedly slain by Bulger.

“I feel so bad,’’ she said. “You sit here every day with these victims and they become part of your life. He seemed so spirited. He had a lot of spirit.’’

Donahue said she spoke to Rakes early Tuesday about the possibility he would take the stand.

“He was nervous, but he wanted to give his opinion,’’ she said.

She added, “Our prayers and thoughts go to his family.’’

At Rakes’s Quincy home, an unidentified man who gathered mail from Rakes’s mailbox said, “I don’t know anything, can’t remember the last time I saw him … I don’t get involved with all that stuff.’’

A woman who owns a nearby business said she was aware that a central figure in the Bulger trial lived across the street, and she recalled seeing Rakes recently. The woman said she often saw Rakes driving a white van but she hadn’t seen the van in recent days.

Residents living in the heavily wooded area where Rakes was found expressed shock at suddenly being in the midst of news connected with the Bulger trial.

“I can only say that I’m shocked because I live right down the street, and absolutely nothing like this has ever happened around here,’’ said Andy Beaulieu, 19, straddling his bike just off Mill Street.

Aside from the hum of television trucks, the only sound in the background came from birds and insects. Occasionally, a bicyclist zoomed along or runners plodded up a slight hill, their faces glistening with sweat.

Two Lincoln police officers stood in front of their cruisers blocking off a popular walking trail that cuts into the woods parallel to a stream.

“It’s literally in my backyard,’’ Beaulieu said. “I looked it up and couldn’t believe it was so close. That case, it’s like a movie, so there’s a lot of fascination or concern around here.’’

The trail where Rakes was found is popular with dog walkers and hikers, and residents said it is not commonly known to people outside of the community because it is unmarked.

But the path is easy to get to, located near the Route 128/Route 2 interchange. 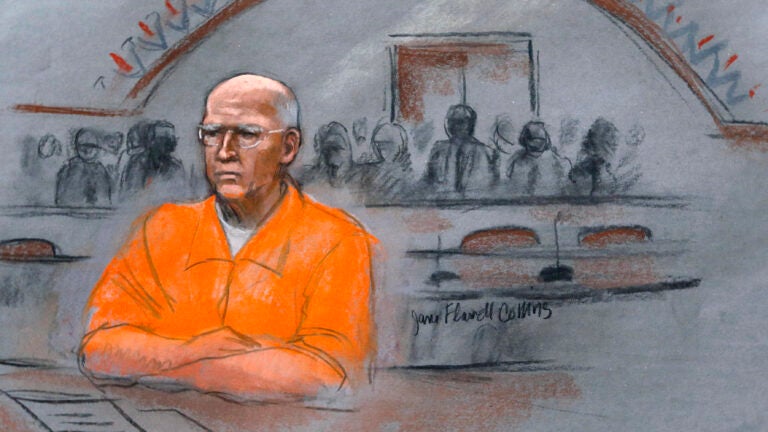 Whitey Bulger’s family: Prison system did not protect him