Boston firefighters battled a stubborn five-alarm blaze that tore through a historic church this morning on West Broadway in South Boston.

The fire was reported at 9:13 a.m. at St. John the Baptist Church, an Albanian Orthodox church, at 410 W. Broadway. At about 1:30 p.m., more than four hours later, the fire and smoke had cleared up, but officials said firefighters were still chasing hot spots in the building and officials said they could be working at the scene until well into the night.

No one was inside the building when the fire broke out and no civilians were injured, but eight firefighters suffered a variety of minor injuries, officials said.

At the height of the fire, flames flickered from the building and smoke billowed into the air, creating a plume that was visible for miles and at times shrouding streets in the area.

“It looks like it’s going to be a total loss,’’ said John Hasson, acting chief of the fire department.

He said the initial call was for a grass fire in the rear of the building.

“Upon arrival, firefighters forced entry into the building. There was heavy fire around the altar, up the walls, and [it] extended into the ceiling and roof areas,’’ he said.

He said it was difficult to get water onto the fire and firefighters let the blaze burn through the roof to get access to the fire below.

Deputy Fire Chief Robert Calobrisi said early this afternoon that 12 occupants of a building next to the church had “self-evacuated’’ and “we don’t want to put them back in there until it’s declared safe.’’

Asked whether the source was a candle, he said he didn’t know and an investigation would have to determine that. He said the fifth alarm was sounded to bring more resources to bear and to give firefighters, who were battling heat and exhaustion, a break.

A church official told reporters that there wouldn’t have been any candles burning at the altar. He said they were put out after Mass on Sunday, which was attended by about 150 people, and since then no one has visited the building except for perhaps a custodian Monday or Tuesday.

He said the congregation of 200 to 300 people has used the building since the 1930s, but the structure goes back further. 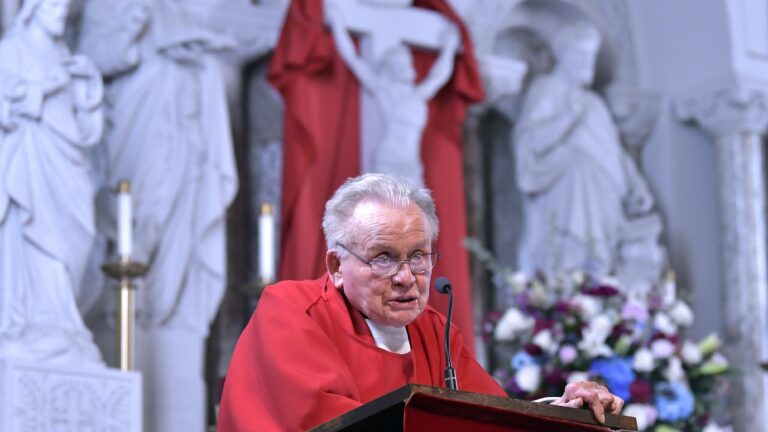