The state’s highest court today gave Middlesex District Attorney Marian T. Ryan a key victory in the prosecution of the Wakefield man who allegedly served as the lookout during the 2010 Christmas weekend jewelry robbery that ended with the murder of Woburn Police Officer John Maguire.

Maguire, before he died, was able to return fire and shoot and kill his attacker, career criminal Dominic Cinelli, who had just robbed the jewelry department at the Kohl’s department store during a heavy snowstorm on Dec. 26, 2010.

Middlesex prosecutors had charged Scott Hanright, who was then 19 years old and living in Wakefield, with first-degree murder and 21 other charges.

At the request of Hanright’s defense attorney, Superior Court Judge Thomas P. Billings dismissed five charges, and ruled that prosecutors could only use one legal theory — joint venture — in prosecuting Hanright for Maguire’s murder. Hanright was unarmed and not directly involved in the gunfight, officials have said.

But in a unanimous ruling today, the Supreme Judicial Court found that Hanright could be prosecuted for first-degree murder under three different legal theories, and that there was enough evidence to allow prosecutors to try him on all 22 charges.

Writing for the court, Justice Francis X. Spina concluded that a jury, not a judge, should decide Hanright’s fate and whether he is guilty of the charges.

“We have reviewed the evidence presented to the grand jury and conclude, contrary to the motion judge, that there is sufficient evidence to support the challenged indictments,’’ Spina wrote. “Whether the Commonwealth can sustain its burden of proof beyond a reasonable doubt as to joint venture liability for each of the challenged indictments and for murder on the theories of deliberate premeditation or extreme atrocity or cruelty, is one we leave for trial.’’

Maguire was the first Woburn police officer to die in the line of duty.

The slaying of a police officer by Cinelli, an ex-convict on parole, led Governor Deval Patrick to replace the membership of the Parole Board and to set out new rules under which parole can be granted for violent repeat offenders.

Hanright has pleaded not guilty and is being held without bail.

The alleged wheelman, Kevin Dingwell, has pleaded not guilty to being an accessory after the fact to robbery.

In a statement, Ryan welcomed the SJC’s ruling.

“This is an important decision which allows us to fully prosecute the defendant for his participation in the brazen crime that took the life of a dedicated police officer,’’ Ryan said in the statement. “Our thoughts remain with the Maguire family and the Woburn Police Department as we continue to move forward with the prosecution of this case.’’ 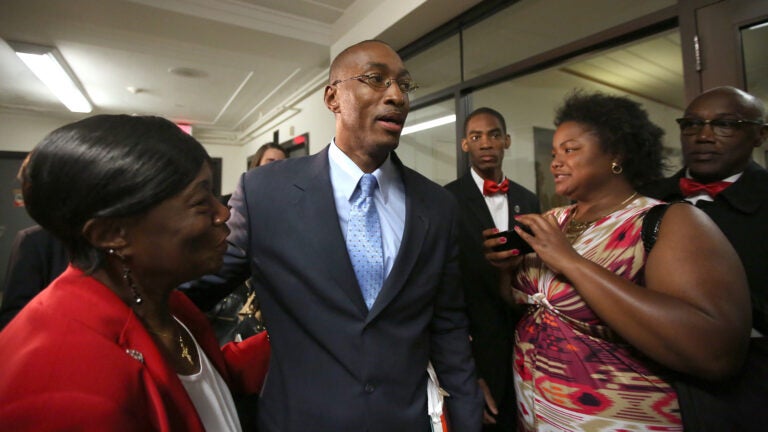