The MBTA will run rush hour-level service throughout the day Saturday to accommodate the hundreds of thousands expected to throng the city for the Red Sox World Series victory parade, transportation officials said at a press conference this morning.

The T expects that there will be more than 2 million rides taken on the subway, commuter rail lines, and bus system on Saturday — much more than the 1.35 million taken on an average weekday.

Officials advised people on the city website against driving into the city, saying streets along the route will be closed to traffic from 9 a.m. until about 3 p.m. Parking will also be restricted along the parade route as well as on nearby streets from 12:01 a.m. to 4 p.m. Saturday.

Boston Police Superintendent-in-Chief Daniel Linskey said the ride on the Charles River should last about 30 minutes and won’t go as far as the Massachusetts Avenue bridge as other celebratory events have done in the past.

He said the duck boats will travel under the Longfellow Bridge and travel past fans on both the Boston and Cambridge sides of the river.

He said a security zone would be created on the river starting at 10 a.m. that will remain in effect until 2 p.m. Anyone who violates that zone – in the past people have swum into the area and kayaked into the area – will be arrested, he said. The Coast Guard, Environmental Police and other public safety agencies with marine units are assisting with security.

He also said that the duck boats will travel further away from the shore than they have in the past. And he asked parade attendees not to throw baseballs or other objects out towards the players, which has also happened previously.

“We don’t need any of that,’’ he said. “We want our city to be able to showcase our great team, and have a safe event and have everybody on dry land as soon as possible.’’

Linskey urged paradegoers to minimize what they carry to the parade. He said backpacks aren’t banned, but it would be helpful to every one attending to leave them at home, if possible. He stressed that if someone does bring a backpack, they must maintain control of it at all times.

Leaving a backpack unattended, even innocently, will draw the attention of law enforcement Police will be wearing high-visibility vests, he said, and if a member of the public has a safety concern, they should alert the nearest police officer, he said.

Transit officials warned that people should take an early train to get downtown, especially those planning on riding the commuter rail.

“For the commuter rail, it’s in your best interest, based on what we’ve seen historically at these types of events, to get into the city early,’’ said MBTA chief operating officer Sean M. McCarthy.

Transportation Secretary Richard A. Davey noted that during the 2011 Boston Bruins Stanley Cup parade, some commuter rail passengers were stranded on train platforms as trains jam-packed with riders had to pass them by.

Davey explained that it is relatively simple to run peak-hour subway service on Saturday for a special event, but because the T uses an outside contractor for the commuter rail, it is more difficult to add a significant number of extra trains on commuter rail lines. Customers must expect that later trains will be overcrowded, and some may be turned away.

“If you wait until the last minute, you are unlikely to get on,’’ Davey said.

On its webpage, the T offered details – and some advice – for the traveling public.

Commuter rail service has been modified to “provide special, pre-parade service with extra inbound trains in the morning. In addition, capacity is being significantly increased along each line,’’ the T said in its posting.

However, commuter rail service on lines that do not operate on Saturdays will remain shut down, the T said. Those lines are the Greenbush, Kingston, Needham, Fairmount, and Stoughton lines, the T said.

MBTA Transit Police Chief Paul MacMillan said bicycles will not be allowed on subway or commuter trains all day, and there will be an increased presence of officers and explosive-sniffing dogs. Even with the increased surveillance, however, there are no restrictions on bags being brought onto the T and officials will not be using metal detectors to screen passengers.

“We need to move a lot of people in a short period of time,’’ MacMillian said.

MBTA General Manager Beverly A. Scott said she believes the T has the capacity to handle the crowds with few significant hitches.

“This is an extremely, extremely experienced team,’’ Scott said. 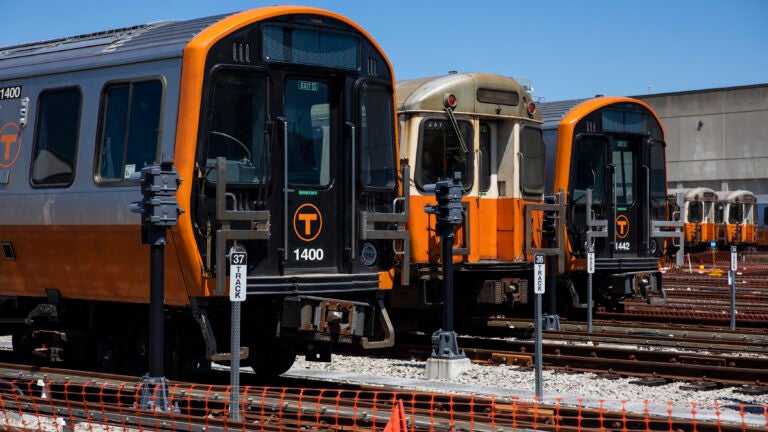