Somewhere north of Boston there is a 47-foot-tall white spruce tree on a flatbed truck, heading our way.

It is no ordinary tree. Boston’s official Christmas tree is an annual thank you gift to the city from Nova Scotia for the help that Boston provided after a deadly explosion in Halifax on Dec. 6, 1917.

About 2,000 people were killed and hundreds injured when two ships collided in the harbor, causing a devastating blast that wiped out half the city, said Bruce Nunn, spokesman for the Nova Scotia Department of Natural Resources.

Boston sent doctors, nurses, and medical supplies by train to Halifax. Despite being delayed 24 hours beccause of a blizzard, the Boston responders were some of the first to arrive at the scene, Nunn said.

This year’s tree was donated by Mary Lou Milligan of Mill Cove, Nova Scotia, Nunn said. Nova Scotia typically seeks a red or white spruce or a balsam fir tree that is healthy, symmetrical, dense, between 40 and 50 feet tall, and accessible enough to cut down. Milligan’s spruce is about 40 years old.

“We grow the best Christmas trees in the world,’’ said Premier Stephen McNeil, the equivalent of the governor of the province of Nova Scotia.

This will be the 42d consecutive year that the province has sent a tree. After one of the trees was sent for Christmas in 1918, the practice lapsed for decades until it resumed in 1971.

The tree was chopped down Tuesday during a ceremony at Milligan’s home, and a grand parade in Halifax sent the tree off at 11:30 a.m. Wednesday. Loaded on a truck, it will travel across the province, cruise across the Bay of Fundy on a ferry, and then trek through Maine and New Hampshire to Boston. The tree should arrive at Boston Common at about 11 a.m. Friday, Nunn said.

“This year has an extra special meaning for us,’’ said McNeil. After the Boston Marathon bombings that left three people dead and 260 injured, Nova Scotians decided to have a group of runners lead the tree out of Halifax.

“We thought it was fitting today to have them run it out of our city and into your city,’’ said McNeil, who gave a speech at the parade Wednesday.

“We feel a real closeness with the people of Boston,’’ said Andrew Younger, a minister for the Nova Scotia government. “Our hearts were broken during that tragedy.’’

The tree will be lit during a ceremony on the Common on Dec. 5. Mulligan, her daughter, and two grandchildren will travel to Boston to watch their tree go up in lights amid holiday cheer, Nunn said.Younger will also join Bostonians for the lighting and give a speech
. 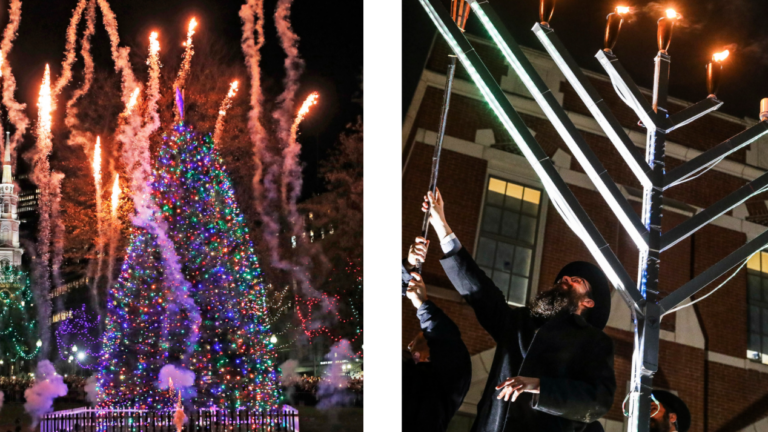