WASHINGTON — Scott Brown has been a fashion model, a lawyer, a national guardsman, and United States senator from Massachusetts. Now he has added a new job description: e-mail spammer.

A marketing pitch sent by a promotional company that rented Brown’s mailing list was blasted from his e-mail account to thousands of supporters Wednesday. “5 Signs You’ll Get Alzheimer’s Disease’’ came with links to a video from a doctor warning against flu vaccines, fluoridated water, and excessive exercising, among other questionable medical claims.

The e-mail was topped by a Brown’s logo, followed by a short note: “Dear Patriot, I thought you might be interested in the offer below from our sponsor Newsmax Health. Thank you, Senator Scott Brown.’’

The e-mail was not the first of its kind. It followed an e-mail earlier in the week promoting a sponsored article about the IRS with another link: “Seniors Scoop Up Unclaimed $20,500 Checks? (See If You Qualify).’’

By Wednesday afternoon, after some unflattering media attention, Brown abruptly announced that he would cut ties with the vendor — Newsmax, a conservative media company — which rented his e-mail list and created the marketing content distributed under Brown’s name.

Brown acknowledged to WMUR in New Hampshire that he rents his list to vendors.

But Brown said he did not authorize the e-mail, even though it is on his letterhead, signed with his name, and was sent from his usual political e-mail, [email protected].

“While the issue of Alzheimer’s is personal to me and an issue I have been working on for years, I did not approve or authorize the sending of this particular e-mail,’’ Brown told the television station. “Due to this and other issues, I am terminating my relationship with this vendor effective immediately.’’

Neither Newsmax nor Brown responded to multiple requests for comment.

Aside from their commercial content, Brown’s e-mail ads look no different than other messages he has sent to his supporters in recent weeks, including those that reprint his political speeches or a romantic column written by his wife. All carry a portrait of Brown in a barn jacket beside a red, white, and blue logo, and then a message.

Brown, a lawyer and paid contributor to Fox News, has been weighing a run for the US Senate against Jeanne Shaheen, a New Hampshire Democrat, which has brought him added scrutiny. New Hampshire Republicans have been eager for him to make a decision following months of increased political activity in state. Brown moved to Rye in December.

Paul S. Ryan, senior counsel at the Campaign Legal Center, said there are few if any legal restrictions on what political candidates and groups can do with their lists of supporter e-mails, one of their most valuable assets.

Brown has built his reputation as a plain-spoken everyman. New Hampshire Republicans say they are not worried that image will suffer because Brown used his supporters’ e-mail addresses to market products.

The doctor promoted in the e-mail, Dr. Russell Blaylock, boasts on his website that “He doesn’t parrot what the New England Journal of Medicine — which receives heavy subsidies in advertisements — claims.’’ He crusades against “killer vaccines.’’

Blaylock could not be reached for comment Wednesday. But public health officials have long worried that physicians who say vaccines are harmful can undermine public health efforts.

“This is total conspiracy theory,’’ said Dr. Sean Palfrey, past president of the Massachusetts chapter of the American Academy of Pediatrics and a professor of pediatrics and public health at Boston University School of Medicine. “The CDC has a whole website on these kind of hoaxes. There is absolutely no evidence that the flu vaccine, nor any other vaccines, nor exercise is associated with Alzheimer’s or Parkinson’s.’’

Campaign reports show Brown began collecting money from his e-mail list last year, when he converted his campaign account into a political action committee known as The People’s Seat PAC.

The committee took in $55,600 for renting out its e-mail list to two vendors in 2013, Conservative Connectors out of Virginia and Granite Lists out of New Hampshire, according to recently filed campaign finance reports.

Newsmax, the sponsor of the newest ads, was not among the groups paying Brown in 2013, suggesting the latest arrangement is new. Candidates and political committees have not yet filed reports disclosing their 2014 finances.

Brown is not the first political candidate to let commercial interests have a crack at his e-mail list. In July, Herman Cain, the former presidential candidate, regaled subscribers to his e-mail list with a particularly racy offer: “Breakthrough remedy for ED!’’ That was a reference to erectile dysfunction.

Ryan, the Campaign Legal Center lawyer, said the law is unclear on whether proceeds can be for Brown’s personal use. Candidates and politicians may not profit from campaign accounts, but he said
“there’s basically no constraints with what a PAC can do with the funds it raises.’’

Regardless, “having money sitting in a PAC is very beneficial’’ to Brown, he said. 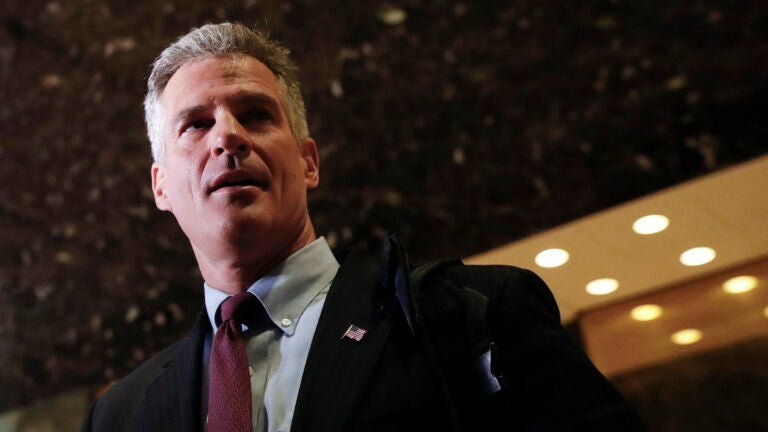