Ballet is about making extraordinary feats look effortless, and the same could be said for the event planners behind Boston Ballet’s 50th Anniversary Ball. AE Events had been on site with gala co-chairs Stephanie Brown and Jessica Schmitz at The Castle at Park Plaza since last Wednesday, transforming the exhibition hall into an elegant party setting with custom-designed chandeliers and a full runway anchored by two stages. From those stages, the audience of 460, which included Gerard Riveron, executive director of Dorfman Jewelers, and Leslie Parris Kwan, general director at L’Academie, enjoyed an evening of entertainment that began with a fashion show retrospective of Boston Ballet costumes. Company dancers modeled a range of gems, from the energetic striped Norma Kamali outfits from “In the Upper Room’’ (1986) to a David Walker-designed tutu from “The Sleeping Beauty’’ (1975). During the silent auction, guests could also bid on past costumes including Larissa Ponomarenko’s Sugar Plum Fairy tutu and tiara from “The Nutcracker’’ and Jennifer Gelfand’s balcony nightgown from 2003’s “Romeo & Juliet.’’ But nostalgia for the past gave way to celebrating the next 50 years when half the company, body painted and dressed in a rainbow of bright costumes, performed “Rave,’’ a spirited contemporary piece choreographed by Karole Armitage. “We want to be the ballet company of the future,’’ said artistic director Mikko Nissinen, who will close out the 50th festivities in striking fashion with a weeklong run at Lincoln Center in New York in June. “Hopefully we can impact people’s lives and have a wonderful time doing it.’’ 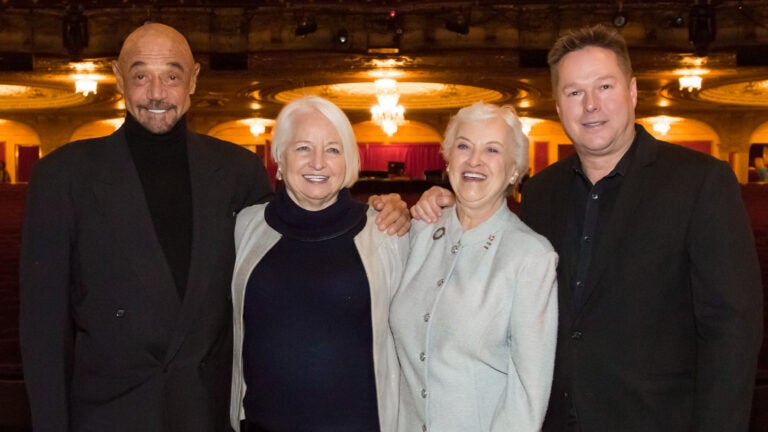 A reunion weekend for Boston Ballet